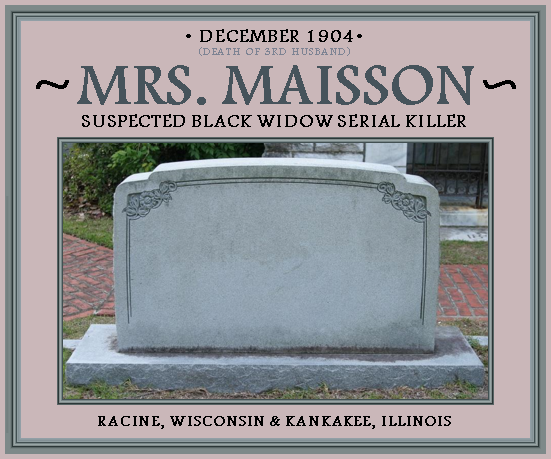 FULL TEXT: Considerable mystery surrounds the actions of Mrs. John A. Maisson, who has been arrested at Kansas City on charge of passing worthless checks to pay for her husband’s tombstone, the warrant having been issued at Kankakee, Ill. What makes Racine people interested in the woman in the statement that she was married three times, all of her husbands dying under mysterious circumstances. The second husband is said to have been George Lester of Racine.

Records her do not show that any man by the name of George Lester has lived or died within the past ten years. They do show, however, that Fred Lester, aged 32 years, died on September 16, 1903. Whether this was the husband of the woman is not clear and further investigation is under way.

Dispatches from Kankatee are in effect that charged with passing in effect that charged with passing a worthless check with which to pay for a tombstone erected over her husband’s grave, the widow of John Maisson, of Flannagan, near that place, has been arrested at Kansas City and will be brought back to that city for trial as soon as requisition papers can be secured, the arrest of the woman revives the deep mystery that surrounded the death of her husband in surrounded the death of her husband in December of last year. Bearing on this Henry J. Maisson, the woman’s brother-in-law and a station gent near Kanakee, late Sunday afternoon came out with a statement that is looked upon as showing that the family of the dead man has not accepted as natural the brother’s demise.

“My brother,” Mr. Maisson says, “was married in Milwaukee. We knew nothing of the marriage until his widow returned to Kankakee with his body last December. She said she had been married three times, her second husband having been a George Lester of Racine, Wis. The name of her first husband I have forgotten. My brother died suddenly of blood-poisoning. The doctors said he prescribed arsenic, but we have no evidence that my brother was given an overdose. From what we can learn the woman’s other husbands died in the same manner.”

It is said that the Maisson family will endeavor to have the woman explain all the particulars in connection with the death of all three of her husbands.

Sheriff Cyrier and State’s Attorney Miller went to Springfield so as to obtain requisition papers for the widow and she will be at Kankakee in a few days if she is not successful in resisting eradication. The fact that Assistant Chief Schuettler of the Chicago police force is related to the family adds interest to Mrs. Maisson’s alleged escapades.

The woman was the wife of John Maisson, formerly of Flannagan, Ill., but later of Milwaukee, Wisc.; Mountain Home, Ark., and Clear Lake, Iowa, where he died in December, 1904. She brought the remains to Flannagan and announced to the relatives of her husband that she was his wife, showing a marriage certificate, which proved that she had been married to him at Milwaukee Feb. 9, 1904. She also said she was the beneficiary of a $2,000 insurance policy which her husband carried.

After the funeral she went to Kansas City, where she had formerly resided, returning to Kankakee a few weeks ago. She was still in deep mourning and announced to her neighbor’s father at Lanagan that she wished to erect a tombstone to the memory of her husband. The latter was willing to pay half the charges and the stone that was ordered from Kaufman & Wallheiser. When it was finished Mrs. Maisson announced to the family that she would settle for it and then return home. Before leaving she asked her father-in-law to indorse a check which she had drawn on the Western Exchange National bank at Kansas City, payable to herself and amounting to $225. Mr. Maisson did as requested and she cashed the check at a local bank.  She then called on the marble firm. She told them that she was a little short of currency and wished to pay her share of the bill by check. The amount was $125.

Mrs. Maisson is about 30 years old.

[“One Husband A Racine Man – George Lester Said to Have Been One of Mrs. John Maisson’s Three Spouses. – Fred Lester Died in Racine Two Years Ago – Woman Arrested for Giving a Worthless Check -
Relatives of Last Husband Believe He Expired Under Suspicious Circumstances.” The Racine Journal (Wi.), Aug. 20, 1905, p. 1] 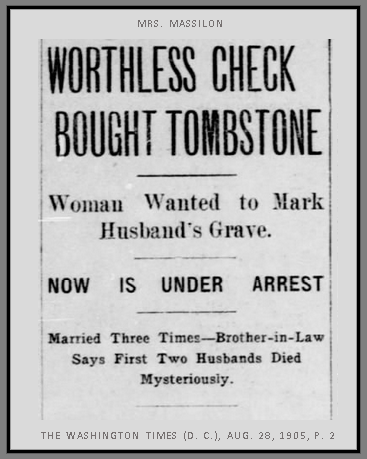 FULL TEXT: Mrs. A. A. Maisson, arrested at Kansas City on charge of having swindled a Kankakee, Ill., firm out of considerable money, representing that she wanted the money to erect a tombstone on the grave of her late husband, is well known here.

It was in the year 1902 that she came here. At that time she was Mrs. Fred A. Lester, and her husband was with her. They came from Manistee, Mich. A handsome residence, owned by Attorney Thomas M. Kearney was rented on West Sixth street and the couple kept roomers. The husband was a member of the Odd Fellow fraternity and affiliated with Lodge 137, while the wife joined the Lily of the West lodge.

She represented that she owned a number of houses in Milwaukee and received high rents for the same. This was found not to be true. In September 1903, Mr. Lester, who was employed as machinist at the Racine Boat Manufacturing Co., was taken suddenly ill. The late Dr. A. L. Buchan was called. He could not agree with the wife in regard to the ailment and treatment and refused to longer have anything to do with the case and Dr. Taylor was called who said the man was suffering with Typhoid fever.

A few days later he died. Ugly stories gained circulation and Coroner Jones Hoyle was requested to investigate and was on the point of stopping the funeral and demanding a post mortem examination of the body, when the witnesses flunked and refused to appear and give testimony of what they had seen or knew and on advice of the district attorney the case was dropped.

Afterward Mrs. Lester received $1,000 on the life of her husband and $50 from the Odd Fellows. She went from here to Milwaukee, opened two confectionery stores and afterward it was ascertained that she again married, but to whom was not known. Nothing was heard of her after that until news of her arrest at Kansas City was reported.

People who knew the woman well will watch with interest the outcome of her arrest and what develops in regard to the death of her third husband.