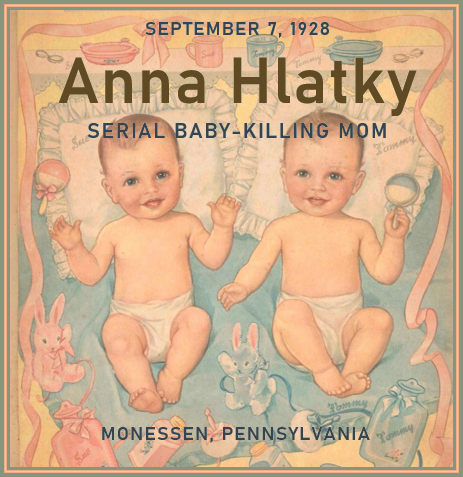 FULL TEXT: A signed confession admitting to smothering baby twins, whose skeletons were dug out recently in a chicken pen in the rear of the home of Mr. and Mrs. John Blatky, of McMahon street, Monessen, was produced as evidence last evening when the mother. Mrs. Anna Hlatky, was arraigned before Alderman Fred Upton of Monessen, on a charge of murder.

Mrs. Hlatky, who has been a patient in the Memorial Hospital since August 25, was taken from that institution yesterday for the hearing. She was represented by Attorneys Vincent R. Smith of Monessen, and Philip K. Shaner, of Greensberg, who entered a plea of not guilty, but after two witnesses, Health Officer Frances E. Gibson and Dr. M. E. Griffith, has been heard, Alderman Upton held the defendant for court without bail.

More than 500 persons crowded around the office of Alderman Upton last evening while the hearing was in progress.

FULL TEXT: Defense attorneys will not seek a new trial for Mrs. Hlatky of Mosessen, who is held in the Westmoreland County jail today awaiting sentence after being convicted of voluntary manslaughter in connection with the discovery of two sets of twins buried in the chicken yard ion the rear of the Hlatky home in Monessen.

John Hlatky, husband of the convicted woman, still faces trial charged with being an accessory after the fact.

Mrs. Hlatky was convicted this week by the state when her four purported confessions to smothering the infants was introduced in the trial and damaging testimony was given by her own 12 and 13-year-old daughters.

The case opened Tuesday afternoon [Nov. 20], the entire afternoon being taken up in the selection of a jury and the first witnesses were called to the stand Wednesday morning. The trial finally went to the jury shortly after 5 o’clock Thursday afternoon and at 8:30 reported that a verdict had been reached. There were only a few persons including the Commonwealth’s attorneys and the defense attorneys and the defendant in the court room when the verdict was rendered. John Hlatky, husband of the convicted woman, charged with being an accessory after the fact, secured a continuance and will be tried at the next term of court.

Thursday, the early part of the morning was devoted to a series of calling and recalling of witnesses to the stand who had already testified for both the Commonwealth and defense.

The defense recalled Sergeant James Buckley, of the state police, who had charge of the case for his trip to the stand no less than three times. The defense, attorneys, P. K. Shaner and Vincent R. Smith, quizzed the state trooper again as to the means of getting the confession the state police secured on their visit to Mrs. Hlatky in the Monongahela hospital. In addition to Sergeant Buckley, both Corporal H. C. Johnson and Private A. A. Drenning were summoned by the defense for cross examination. All three said they came to witness a statement made by Mrs. Hlatky.

Then Sergeant Buckley was called to the stand by District Attorney John R. Keister. He denied that any force or threats were made during the visits made by the officers to Mrs. Hlatky's hospital room either on Sunday or on Tuesday, last August.

Mrs. Hlatky was recalled by the defense in an effort to test her hand writing against that appearing on some of the confessions made by her. Apparently satisfled, the defense excused her after Assistant District Attorney Fred B. Trescher of the Commonwealth's side, had her write her name. There was an objection made by the Commonwealth and sustained by the court to the admission of the handwriting.

Despite the objections of the defense counsel four of the confessions alleged to have been made by Mrs. Hlatky were admitted and read to the jury.

The following statement was made in the hospital where the woman was a patient:

"The twin babies born to me on August 11, 1928, were born alive as they were crying, l kept them under a feather tick until they smothered. I make this statement of my own free will as my priest, Father Kitz, is here with me, and now I feel better. They tell me I cannot say anything about my husband so I guess 1 cannot."  -- Signed, Anna Hlatky. --Witnesses: L. G. Simmonds, Monongahela Hospital.

The following confession was obtained from Anna Hlatky by Dr. M. E. Griffith and Miss Virginia I. Minger, a nurse in the Memorial hospital, Monongahela, Pa.:

"I had two babies in July 1927. I forget the exact date. One baby was born one-half hour after the other. I heard one crying a little bit. Margaret heard the baby cry and came in the room and asked me what was Che matter. John buried the babies. John is the boy that is in jail now. I kept these babies under the covers so that they would not get any air, and smothered them. When I thought I was able, I wrapped the babies up in my old sweaters. These babies were my husband's. They were born in the morning and Margaret was the only one at home. I would not have a doctor or mid wife because I was afraid of my husband. -- Anna Hlatky. -- Witnesses: M. E. Griffith, Virginia I. Minger.

A portion of the confession as made to Pennsylvania State Police, Indicating the method of death and burial, follows:

"I left the babies lay under the tick on the bed and I didn’t move them until Sunday morning. At that time, 1 wrapped them p" in a blue blanket which was on the bed and put them in a boiler that Margaret brought up stairs. The boiler was put into the cupboard in the bedroom. On Sunday evening, Margaret said to me that there was a bad smell in the room, so I told her to go out in the back yard and dig a hole and bury what was in the boiler, In the hole. Margaret dug the hole and buried the bundle. I told her to put some lysol on the ground so it wouldn't smell. I did not tell Margaret what was in the bundle, t gave her a nickel for burying the bundle." -- (Signed) Anna Hlatky. -- Witnesses: James V. Buckley, Hilding C. Johnson, David A. Drenning.

FULL TEXT: Greensburg, Pa., Jan. 21. – Mrs. Anna Hlatky, aged 36 years, of Monessen convicted of involuntary manslaughter in criminal Court here in November for the killing of two sets of new born twins in 1927 and 1928, was today sentenced to an indeterminate term of from 7 to 24 years in the Women’s State Industrial Home at Muncie, Pa.

The woman, unmoved, took the sentence calmly, her only concern being for the care of her minor children, who are now receiving county aid. The bodies of the babies were buried in a chicken yard at the rear of the Hlatky home.  The woman testified at the trial that her husband had threatened her with death if she gave birth to any more children.