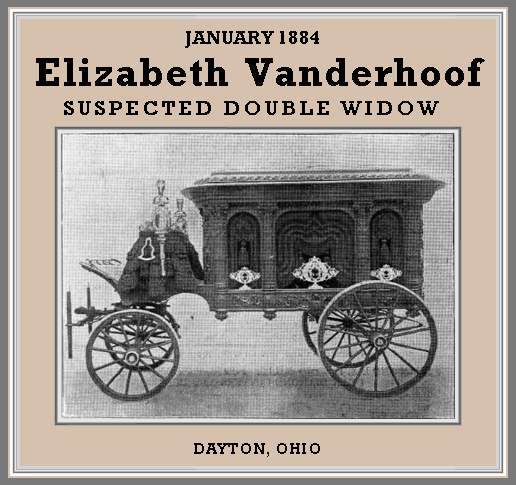 FULL TEXT: Sheriff Clarke and Under-sheriff B. R. Stearns arrested Mrs. Elizabeth Vanderhoof and John
Chapman of Gulion, this county upon a warrant charging them with murdering Wm. Vanderhoof husband of the first named Vanderhoof died under suspicious circumstances December 1, 1883. January 8th his body was disinterred his stomach removed and sent to Ann Arbor for examination and arsenic was found in considerable quantities Chapman was the hired hand of Vanderhoof and suspicious relations have been noticed between him and Mrs. Vanderhoof Several years ago Mrs. Vanderhoof lost a former husband one Salisbury under somewhat similar circumstances that although there was considerable talk in regard to his death no arrests were made Vanderhoof was at that time Salisbury’s hired man and shortly afterward took the widow to wife Up to the time of the arrest of Vanderhoof and Chapman it was understood they had been married but they now deny that.

***
FULL TEXT: Berlin Springs, Mich., November 26. – Elizabeth Vanderhoof of Dayton, this county, was to-day convicted of murder in the first degree in the circuit court. Sentence has been deferred to allow time to file a bill of exceptions. If a new trial is denied the case will be carried to the supreme court. The case has been on trial for ten days and the court room has been packed every day. The accused has been the most composed of all, and did not wince a bit as the foreman of the jury announced the result of their deliberations. Members or the jury refused to talk upon the matter. Mrs. Vanderhoof s husband was the victim, and an analyzation of portions of his stomach made at the university of Ann Arbor showed that he had suspected that his wife had poisoned him during an illness, and had the body exhumes, and the outcome was Mrs. Vanderhoof’s conviction to-day. Opinion is divided as to her guilt, and her physical condition has created a great deal of sympathy in her favor. She is thought to be enceinte. She was ably defended, but the jury were out only a little over an hour. How the ballot stood when they first went out can not be ascertained. She is now in jail here, and court has adjourned to December 15. She is allowed six months to settle upon a bill of exceptions, owing to her condition, and can be let out on bail during that time and also during the pendency of the case in the upper court. Her husband died over a year ago.