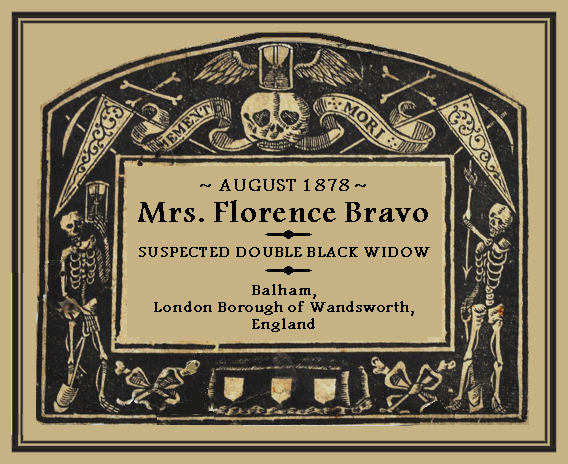 FULL TEXT: Mrs. Bravo is charged with poisoning two husbands through the love for the physician who furnished the drug. The cases are surrounded with many poetical and tragic elements, and there is a strong probability that the introduction of rope will save further decimation of lovely England’s loyal subjects.

FULL TEXT: Mrs. Florence Bravo, the widow of Mr. Bravo, whose mysterious death at Balham some time since occasioned so much excitement, has died suddenly at Southsea. The deceased went to that place to reside about six months since, taking a villa at the extreme end of the beach. There she lived a very retired life, being visited only by a few near relatives, and recently she had been frequently ill. Her illness took a sudden and fatal turn on Tuesday night. An inquest was held by the Portsmouth coroner, Mr. W. H. Garrington.

In opening the proceedings, he said he thought the jury would find that there was nothing in the case out of the ordinary kind; but seeing that the deceased bore a name which some time ago was very much before the public, the case had excited very much more interest than an ordinary case of sudden death. Mr. James Orr said he had been staying at the Southsea Royal Beach Mansions Hotel for the last eight weeks, and was uncle of the deceased. Her name was Florence Bravo, 33 years of age. She was the widow of Charles Turner de Launy Bravo, who was a barrister-at-law. The deceased came to live at Coombe Lodge in April last. She lived a retired life, and made no visits.

The Coroner: What were her habits as regards temperance? I believe she was somewhat intemperate in her habits. I have been in Australia until within the last three years, but during the time I have been home she has been addicted to intemperate habits. Witness continued: During his residence at Southsea he had generally called once or twice a day upon the deceased to see her, and had sometimes seen her the worse, for liquor.

During that time she had been taken ill three times, he believed as a result of the excessive use of stimulants, which resulted in violent vomiting. Twice she recovered through the assistance of her maid, the advice witness gave her, and her own good constitution, but the third illness was a fatal one. The illness which resulted fatally commenced on Monday, although the deceased had been taking stimulants for the last two or three weeks, most of which time she was in bed. She used to take stimulants until sickness ensued. This generally lasted for several hours, and she then left off taking to excess.

On the previous Friday it was arranged that the deceased and witness should start for a tour in Scotland, and he said to her, “Florry, keep straight, and let us start on Monday.” Everett, the maid, said to her, “ Do promise Mr. Orr you will not drink any more brandy to-night;” and she replied, “I won’t promise.” She went up-stairs, and the maid presently returned and said she did not think her mistress would be able to go on Monday.

He saw the deceased both on Sunday and on Monday. She was more intoxicated on the former day than on the latter. On Monday she was very sick, and he stopped until late at night. He went again on Tuesday morning, when he found her very ill, suffering from excessive vomiting. She asked for some stimulant, and he replied that he thought she had had enough already. She, however, said she should die if she did not have some, and he gave her a small quantity of brandy. On Tuesday deceased was very ill, and frequently said “I am going, I am going.” Witness proposed that she should have medical advice, but she refused to have a doctor, thinking that she would get over that attack, as she did previous ones of the same sort. About two hours before her death a sudden collapse took place. An hour later she had a severe attack of vomiting, after which she lay back exhausted, saying, “I can’t breathe; save me! save me!”

Witness gave her some brandy, but she never spoke afterwards. Some observations being made about a medical man not having been sent for, witness said the fact was the deceased had got the impression that her habits of private life were being talked about, and she wished to avoid that, and so refused to have a medical man. After some evidence by deceased’s maid and the servants who were present at the death, Dr. Henry Robert Smith said he first attended her as Mrs. Turner in May, when she was suffering from an excess of stimulants. At his suggestion she became a total abstainer, but only for seven weeks. As the result of a post-mortem examination, he attributed death to hemorrhage of the coats of the stomach, produced by intense vomiting, accelerated by the excessive use of alcoholic stimulants. The deceased’s kidneys were much congested, and she had what was known as a drunkard’s liver. There were no appearances of her having taken any irritant poison. The Coroner having summed up, remarking that the medical evidence clearly disproved any idea which might have, been prevalent as to the deceased having succumbed to poison, the jury returned a verdict to the effect that she had died from the effects of excessive alcoholic drinking, which produced the appearances described by the surgeon. The proceedings lasted till a late hour.

“Did Mrs. Bravo die of drink?” The accounts published of the inquest on the body of that miserable woman seem to show that the circumstances of her death were involved in a very considerable amount of mystery, which the inquest has done little to clear up. Her uncle, Mr. James Orr, tells us that she was 33 years of age, and of a “strong constitution.” He also says that for “three years she has been addicted to intemperate habits” to his own knowledge. Mr. Henry Robert Smith, a medical man, who has “ known the deceased ever since the middle of May,” also says that she suffered “from the effects of an undue amount of stimulants,” and says that “the only assignable cause” for the death “was the excessive use of alcoholic stimulants.”

But now Anne Spanner, who “had been in the service of the deceased for four months and a fortnight,” said she “had never seen the deceased the worse for drink.” Jane Parton, who “had been in the service of Mrs. Bravo for two years and seven months,” also declared that she “never saw her mistress worse for drink.” Another servant, a “confidential nurse, named Everitt,” who was discharged on the Friday before Mrs. Bravo’s death, might perhaps have thrown further light on this point, and one of the jurors not unnaturally “expressed his regret that Everitt was not in attendance,” whereupon Mr. Orr made a remark, of which it is hard to see the revelancy or scope, to the effect that “had she been present most likely the jury would not have been there.”

The Coroner subsequently said that “he regarded the two servants as unwilling witnesses, and thought that they might have said more had they chose.” But what is clear from all the evidence, in which all the witnesses agreed, is that Mrs. Bravo was suffering and had been suffering for some time from “intense vomiting.” She vomited “a black fluid,” none of which was preserved for the inspection of a medical man, and Mr. Orr tells us that although he repeatedly urged her to have medical advice, she “would not send tor a doctor.”

There was, therefore, no doctor in attendance during her last illness; her confidential nurse had been sent away four days previous to her death, and the only information derived as to the cause of that death, apart from the conflicting evidence as to her being a drunkard, arises from the post mortem examination made by Mr. Smith and Mr. Turner, the medical officer of health for Portsmouth. This information is not very ample.

“The stomach was intensely congested,” and contained about four ounces of a tarry-looking fluid without smell, and it appeared to be blood which had been poured out from the inner cavity of the stomach. “Appeared to be” are Mr. Smith’s words, but it would have been more satisfactory had he been able to say, not what it appeared to be, but what it was. The whole inquiry appears to be very unsatisfactory, and the conclusion arrived at far from convincing. The matter should certainly not be allowed to rest where it is at present. — Vanity Fair.