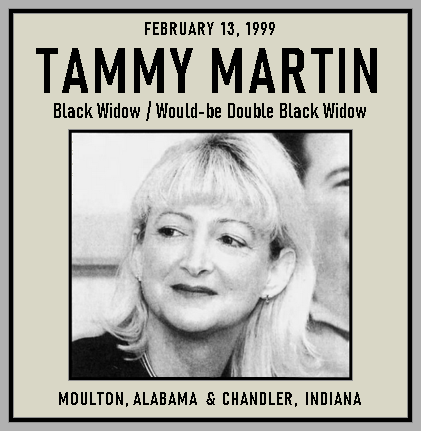 FULL TEXT: MOULTON, Ala. — Tammy Martin quietly pulled a gun out of her purse and pointed it at her husband, David. His eyes were closed and his head was bowed as he sat at the dining table, praying with his parents.

Tammy Martin pulled the trigger. The slug hit her husband in the chest, narrowly missing his heart. The .357-caliber pistol roared again. Another shot to the chest.

She kept firing. Her father-in-law, Bob Martin, was hit as he tried to grab the gun. Though wounded, he forced her out the front door and locked it.

When she broke a window and shoved the gun back inside, he wrenched it from her hand. The mayhem in the Chandler, Ind., home of Tammy Martin’s in-laws was finally over.

David Martin would survive. He was luckier than his wife’s first husband. Ricky Terry died in a 1990 shooting that remains unsolved.

The two men had something in common besides Tammy, according to court records and police: Both carried big life insurance policies that stood to make her rich.

For years, Tammy Alexander had turned heads in her northwest Alabama hometown of Moulton, pop. 3,260. Now 42, she is slender, tall and blond, with fashionable clothes and the air of someone who knows how to wear them.

Her small-town chic seemed at odds with Ricky Terry, a good ol’ boy who worked in construction, owned a horse and loved to hunt.

Not only has development of the drug Herceptin saved the lives of an untold number of women with a particularly aggressive form of breast cancer, but it also opened new avenues of research that have led to multiple other targeted therapies that...

But Tammy and Ricky were childhood sweethearts who dropped out of high school and married when she was 16. Her parents gave them an acre of land in their neighborhood, keeping their daughter close to home.

After 10 years of marriage, however, the couple divorced in 1986. They parted on good terms, partly for the sake of their 3-year-old daughter, Whitney. Sometimes they rode to work together.

Then, on April 12, 1990, Ricky Terry’s body was found slumped in his red pickup parked beside Full Gospel Holiness Tabernacle, outside Moulton.

Six .22-caliber slugs had gone into his chest. A wound to his hand was probably from trying to fend off the first shot, surmised Mike Ball, an agent with the Alabama Bureau of Investigation.

The volume on the radio was turned down low and shots appeared to have been fired from the passenger’s seat. Ball added it up: Ricky Terry was killed while talking to someone he knew.

“At first I never thought it would be a hard one to solve,” Ball said.

But he realized key evidence was missing. No murder weapon, shell casings or fingerprints were found.

There was one thing that caught everyone’s eye, though: a woman’s purse. The small handbag was on the front seat, bloodied and partially hidden by Terry’s body. It belonged to his ex-wife.

Tammy said she left the purse in the truck long before the killing. And Ball believed that given the time of the killing and the places she was seen that morning, there was almost no way she could have killed her ex-husband.

Besides, she passed two lie-detector tests, including one in which she denied having a gun.

Then, police found a man who claimed to have sold a .22-caliber Ruger handgun to David Martin, whom she was dating. Ballistics tests showed such a weapon could have been used to kill Terry.

Tammy changed her story. She had, in fact, had a gun, she admitted now. She had given the weapon to Terry a week before the killing because he was afraid someone was after him, she said.

David Martin took a polygraph test, and it indicated he was lying when he said he didn’t know anything about Terry’s slaying, according to Ball.

But detectives were left with circumstantial evidence and suspicions.

Meanwhile, Tammy sued for $1 million from Jackson National Life Insurance Co., which had a life insurance policy on Terry.

The company refused to pay because he had identified himself as a nonsmoker on his insurance application. Cigarettes were found on his body when he was killed.

Eventually, a federal court ordered the company to pay Tammy $250,000 plus interest.

In July 1992, less than two years after Terry’s death, David Martin and the ex-Mrs. Terry filed a form with an employer, declaring themselves common-law spouses.

They divorced three years later. But they remained together, which under Alabama law is enough for a common-law marriage.

And so it was that they traveled in February 1999 to visit David Martin’s parents in Indiana, supposedly because of a dream Tammy had.

David Martin told police that his wife said she had dreamed that she would buy a winning lottery ticket after praying at the home of his parents, Bob and Ann Martin.

But instead of buying a lottery ticket, Tammy pulled a gun and started shooting.

Afterward, investigators pieced together what seemed a meticulously planned attack--even though Tammy said at one point that she had fired on impulse.

“She’s sharp as a tack,” said Randy Merta, an investigator in Warrick County, Ind., where the shooting occurred.

No fingerprints were on the gun. Tammy had worn plastic gloves during the drive from Alabama to Indiana, explaining to David she would bite her fingernails otherwise.

Merta said that when the subject of Tammy’s first husband came up, she said he had died in an accident.

When the detective later learned the truth about Terry’s death, he said he wondered, “What do we have here? Is it the same thing?”

Divorce records show David and Tammy Martin were required to name each other as the beneficiary of life insurance policies, and Merta said Tammy Martin stood to gain $1 million if her second husband died.

Police went to court with what they thought was enough to get a long prison sentence: A confession to the shooting, three witnesses, the weapon and a motive.

While in the hospital, David Martin told investigators all about the shooting and the lottery dream. He sought and received protective custody of their son, who is in grade school.

Then something happened: Both David Martin and his father asked prosecutors to go light on Tammy.
“They went from being sandpaper to velvet,” Merta said.

David, who had filed the second divorce petition of their marriage, withdrew the complaint. Again, the couple remained together.

He sentenced her to two years in jail but agreed to let her go back to Alabama to a prison work-release program. A dispute with Terry’s relatives landed her back in custody in Indiana, but she again returned to Alabama, where her probation ends in 2003.

“For her to get what she got was a slap at us,” said Merta.

Medical records introduced in another court case show Tammy Martin has been in psychiatric care and was hospitalized last year after a “serious” suicide attempt.

About 10 days ago, Mrs. Martin was hospitalized again, this time after her arm was severely injured with a chainsaw. A probation officer said it was an accident that happened as they were clearing some land.

In June, Tammy Martin was hospitalized again, this time after her arm was severely injured with a chain saw.

A probation officer said the Martins have said it was an accident that happened as they were clearing some land.

Last year, in an interview with the Associated Press, Tammy Martin said that she never meant to hurt anyone in the Indiana shooting, and that her husband forgave her. She has been working at a family restaurant and lives in a $200,000 brick home that is heavily mortgaged.

This spring, she spent time at her son’s elementary school and chaperoned a student field trip, much to the displeasure of some other parents.

One recent day, she and David walked through Moulton holding hands, a picture of happiness.

“We’re working our lives out and we’re happier than we’ve ever been,” Tammy Martin said last year. Citing her probation, she declined recent interview requests but said she may talk someday: “What a story I could tell.” 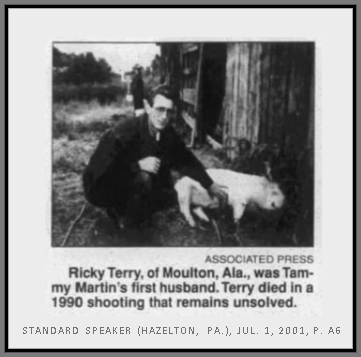 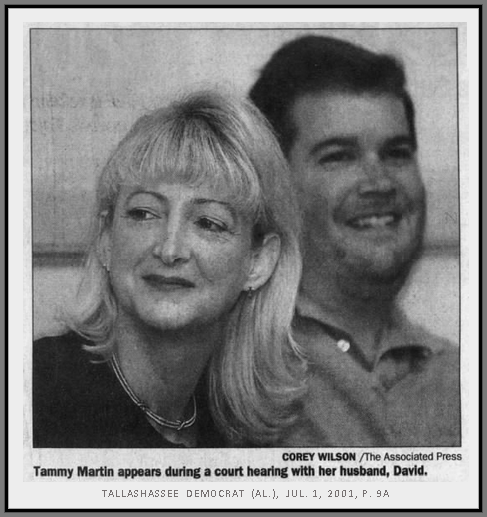 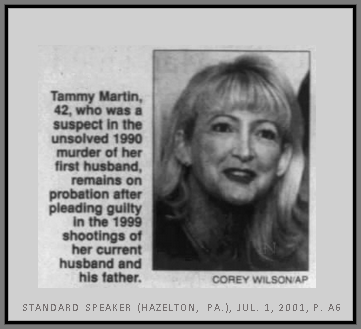