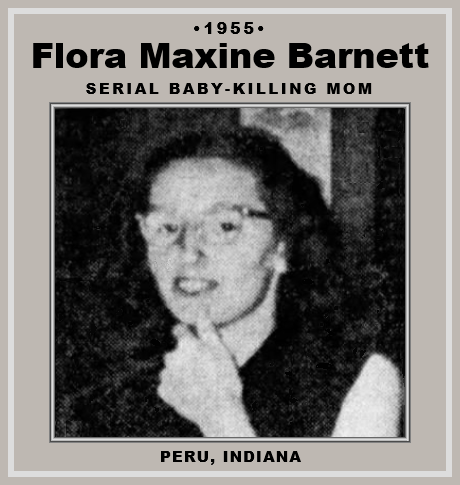 A fourth infant which the girl said was fathered by her uncle, was in critical condition in an Indianapolis Hospital with a blood ailment.

The woman made her home with the uncle and his wife and authorities said she told of having relations with him for about five years. Capt. Newby said the aunt was aware of the relationship during the last year but tolerated it because of his threats to leave.

In the lie test, Capt. Newby said Miss Barnett told of strangling each child with a piece of half-inch elastic tape, wrapping the bodies in blankets and burning them on trash piles.

Miss Barnett gave the dates of birth of the three babies as June, 1951, March, 1953, and July, 1954. She said the births were unattended. Capt. Newby said she reported they were all born alive.

The girl gave birth to the fourth baby at Dukes Memorial Hospital here Oct. 11. She told the attending physician she had had previous unattended births. She first told police the babies had been given for adoption at Logansport, but then changed the story.

The uncle and aunt were taken to state police headquarters late Friday for questioning. The girl did not involve the man or his wife in disposing of the babies.

Flora M. Barnett, 23, pleaded guilty to charges she strangled and burned the boys in 1951, 1953 and 1954. She has a fourth son, who was hospitalized after a premature birth.

Mis Barnett was composed when Miami Circuit Judge Henry Bailey imposed sentence, but later she broke down and wept in her mother’s arms.

FULL TEXT: Peru, Ind. (Spl.) – A young unwed mother who was charged with strangling her three newborn infant sons fathered by her uncle and then disposing of their bodies by burning them, was sentenced to life imprisonment here yesterday.

The slender, red-haired young woman heard the sentence calmly but later broke down and sobbed in the arms of her mother.

The indictment on which she was sentenced charged her with the death of Arthur Barnett on July 24, 1954. Two other indictments returned against her Nov. 10 by a Miami County Grand Jury had charged her with the deaths of Ray Barnett, her firstborn son, on June 26, 1951, and Marion Barnett, on March 8, 1953. Those indictments were dismissed on motion of Prosecuting Attorney Walter Bixler.

A FOURTH SON, Walter Joseph, born last Oct. 11, is a patient at James Whitcomb Riley Hospital for Children at Indianapolis. Born prematurely, the baby was listed as critical for a time but is now reported to be doing satisfactorily.

Miss Barnett had named her uncle, Ray Devirel Warren, 35, as the father of her four children. She admitted intimacies with him since she went to live in the Warren home after her graduation from the Mexico High School in 1950.

Warren was indicted for sodomy and is to be arraigned later. Warren, a city utilities lineman, was released on $1,000 bond.

MISS BARNETT admitted giving birth to the babies in the bathroom of the Warren home without aid, then wrapping their bodies in a towel and later disposing of them by burning them on a trash pile. She said none of the Warren family was aware of what she did with them.

The case came to light after complications developed with the birth of Miss Barnett's fourth child and she was taken to Dukes Hospital. Her physician questioned her about her previous children and she said she had placed them with a Logansport agency for adoption.

FULL TEXT: PERU – A sordid story involving unnatural sexual relations with his niece was aired in Miami circuit court Monday and ended with the defendant Divirel Warren, 35, former Peru city lineman, being given a two to 14 year prison sentence to be served at Michigan City State Prison.

Warren’s legal counsel, Richard Rhodes, indicated he would seek a new trial, Warren was lodged in the county jail pending further action and renewal of a $1,000 bond.

The case which has been pending over a year opened at 10 a. m. Monday before Special Judge Alvin F. March of Plymouth, judge of the Marshall circuit court. Warren was charged with sodomy in Miami County grand jury indictment returned Nov. 9, 1955 “on or about Jan. 15, 1955.”

The state’s principal witness in Monday’s trial was Miss Flora Maxine Barnett, 24, of Peru, who is now serving a life sentence on a second degree murder charge at the Woman’s State Prison at Indianapolis.

Mis Barnett, Warren’s niece by marriage, named him as the father of four sons born during the five years that she had lived in the uncle’s home. Miss Barnett admitted that she strangled three of the babies and burned their bodies on a trash pile, but claimed Warren did nor participate in destroying the infants.

In handing down his decision, Judge Marsh said that “this is an unusual case and was not a pleasant task presiding as judge, but he felt that the evidence presented proved without a reasonable doubt that the defendant was guilty.”

The trial ended about 3 p. m. The courtroom was filled during the morning and afternoon sessions by interested and curious spectators.