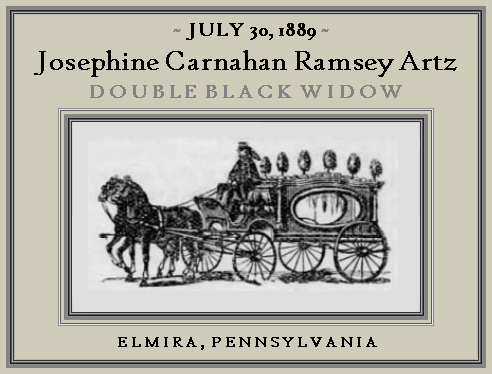 FULL TEXT (Article 1 of 2): Aledo, Ill., July 31. – Mrs. Isaac Artz was arrested here by Sheriff Warwick last night charged with poisoning former husband. The woman’s history is a remarkable one and is causing a sensation here as it is being brought to light. She was married more than twenty years ago to David Ramsey a farmer of this county. After some time during which two children were born, they were divorced Mr. Ramsey subsequently moved to New York Mrs. Ramsey soon married a man named Coleman, living with him number of years. Mr. Coleman died suddenly about three years ago and many neighbors suspected that his wife had poisoned him. She remained in this county till last May when Isaac Artz well known in this vicinity as “The Prophet” became infatuated with her. Mrs. Coleman was very willing to marry Artz but he told her the Lord would not allow him to marry her while her divorced husband lived.

About this time Mrs. Coleman opened up a correspondence wish her first husband Mr. Ramsey who resided in Elmira N Y which resulted in her going back to Elmira About the first of May she and Mr. Ramsey re-married The second day after the wedding Mr. Ramsey was taken violently ill and died declaring that she had poisoned him. Mrs. Ramsey, as soon as the funeral was over came back to Aledo, and in 21 days after Ramsey’s death married Artz, who now had no objections

Mr. Ramsey’s body was taken up and arsenic was found in his stomach. As soon as this was known the Coroner at Elmira telegraphed the fact here and Mrs. Artz was arrested. A requisition will be asked for. The authorities expect to have Colemans body exhumed and examined as soon as possible.

***
FULL TEXT (Article 2 of 2): Elmira, August 7. –  The Coroner’s jurv which has been in session in this city for the past week on the famous David Ramsey case concluded their labors to-day. A large amount of testimony was taken and the body of the deceased twice exhumed. The first time the stomach was taken out and sent to Professor Miller, Buffalo, for examination. At the inquest h testified to the discovery of arsenic in the stomach, and after the inquest had proceeded for two days the undertaker testified that in embalming the body he had injected an arsenical fluid into the arteries.

Professor Miller then examined the brain ana also found arsenic there, which physicians declare is conclusive evidence that the poison was taken during life. Mrs. Carnahan a sister of the deceased, at whose solicitation the inquiry was made, testified that her brother was first taken III, together with all the other members of the family, at breakfast under circumstances indicating that poison bad been administered in the coffee.

His wife, from whom he had been divorced thirteen years ago and remarried but a few weeks before his death, refused to drink any of the coffee, which first excited witness’ suspicions. Three weeks after the death or Ramsey his wife was again married, to Isaac Artz. a wealthy resident of Aledo, Ill., and is now under arrest in that city. The verdict of the Jury was that Ramsey came to bis death from arsenical poisoning, under circumstances lea ling to suspect Josephine Artz.

After her divorce from Ramsev she married a man named Coleman in Aledo, Ill., who died under what were then considered suspicious circumstances, and since the developments of this inquest the people of that city have decided to exhume his remains to see If any evidence of poisoning there exist. District Attorney Denton now has charge of the case and as soon as a requisition can be obtained from Governor Fifer will begin the prosecution against her for murder.