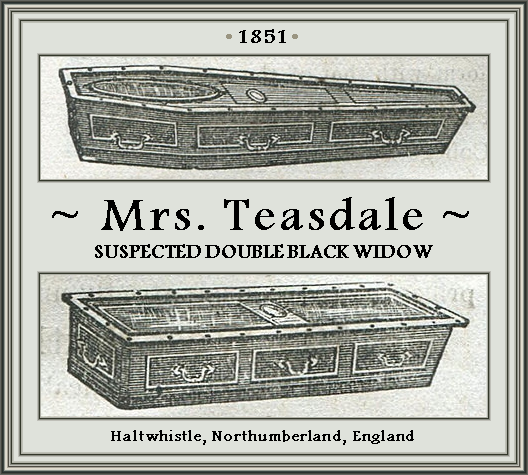 FULL TEXT: We noticed that some time ago an inquest which had been opened on the body of Mr. Thomas Teasdale, lately a farmer at Haltwhistle, in Northumberland, who was suspected to have been poisoned by his wife. The inquest was adjourned to allow time for exhuming the body of John Atkinson, a former husband of the accused woman, and who has been dead about twelve years. On Thursday last the adjourned inquiry was commenced, when Dr. Glover, of Newcastle-upon-Tyne, presented a report of the disinterment of the remains of the former husband, and the result of an analysis he had made of certain parts of them. He found distinct traces of arsenic, and had no doubt that arsenic had been taken by the deceased. The coroner then summed up with great care, and the jury returned a verdict of “Wilful murder” against the accused, Mrs. Teasdale, who will be tried at the next Northumberland assizes.

FULL TEXT: Mr. Stephen Reed, the coroner of South Northumberland, held an adjourned inquest, it being the third adjournment, on the body of Thomas Teasdale, a farmer, at Haltwhistle, on Monday. It was again adjourned to allow the remains of a former husband of Mrs. Truesdale to be exhumed. It has been buried between eleven and twelve years. The facts of this mysterious case are these: – Teasdale was a small yeoman, living at a hamlet killed Killoe, near Featherstone Castle. He had been a widower, but married Mrs. Teasdale sometime after her first husband’s death. Teasdale and his wife had led an unhappy life together, and he had often complained to his relatives of the violence of his wife’s temper, and that she had threatened to poison or stab him. Teasdale had been poorly during the winter, but was taken seriously ill, with all the symptoms of having taken a mineral poison, in the latter part of April. Mr. Smith, surgeon, of Haltwhistle, attended him, and came to that conclusion, and treated him for it. During his illness Teasdale was visited by his relatives and the vicar of the parish, to whom he spoke of the peculiar nature of the disorder and complained of a burning heat and violent pulsation across his stomach. He vomited very much during his illness, and what he threw up had a strong, unpleasant order.

The only regular female attendant upon Teasdale was his wife, and the food that he took during his illness was principally milk. Some of the milk Teasdale vomited Mr. Smith procured and forwarded to Dr. Charlton, of Newcastle; but that gentleman being out of town, it was not sent to Dr. Glover for two or three days, and before the result of that gentleman’s analysis reached Haltwhistle, Teasdale was dead. Dr. Glover detected arsenic in the vomited milk. A post-mortem examination of the body of Teasdale was made, and the stomach and its contents sent to Dr. Glover. That gentleman gave the result of his analysis on Monday, which was that Teasdale had been poisoned by arsenic. Previous to his death, and during his illness, Teasdale appeared in a collected frame of mind. He made his will, and expressed a desire that another medical man be called in to consult with Mr. Smith, which was done. There is a considerable amount of rumour about the sudden death of Mrs. Teasdale’s former husband, who was a person much older than her; and to allow of a full investigation into the case, the jury reserved their verdict until the remains were disinterred and examined.