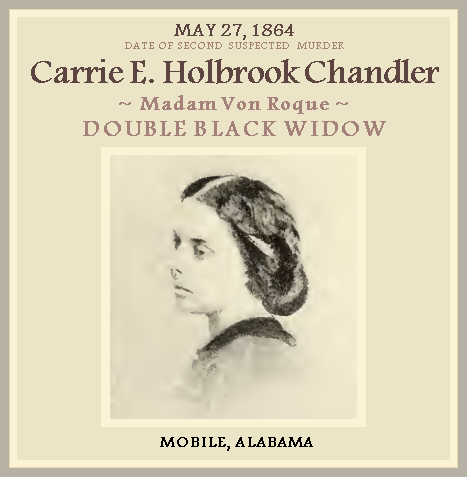 FULL TEXT: Mobile, Ala., May 23. – Carrie E. Holbrook Chandler, the mother of Mrs. James May-brick, who Is charged with poisoning May-brick in Liverpool. Is a woman with a very romantic career.

Mrs. Holbrook came here about 1856, visiting her uncle, Bev. J. H. Ingraham, rector of St. John's Church and author of "The Prince of the House of David." She was very popular in society, being a good conversationalist, handsome though not pretty and quiet and prepossessing in demeanor. Among those who joined her troop of admirers was young Wm. C. Chandler, one of the most prominent merchants of the city. The two young people were mutually taken with one another and he followed her to her home in New York City, where they were married.

Returning to Mobile they lived in good style, and Mrs. Chandler Increased her Influence in society. She was as much of a belle as before marriage and her society was especially sought by young men. It was at the beginning of the civil war that Frank Dubassy [sic] turned up, being a captain in the ordnance department of the Confederate Government. Capt. Frank was a remarkably handsome man and a dashing officer.

He fell in with the Chandlers and soon there was some talk of his attentions to the lady. Suddenly Mr. Chandler fell ill. He grew rapidly worse and his relatives came to offer their assistance but was refused admittance to the house. Chandler died, attended by no one but the young wife, and the report arose that he had been killed by her. There was no official investigation of the charge, but it affected her position, which became so unpleasant that she took her two children and moved to Macon, Ga. In less than a year she married Dubassy there. S

hortly afterward Dubassy was ordered to go to Europe as a representative of the Confederate Government. He and his family took passage on a blockade-runner out of Charleston or Savannah, it is not known which, and had proceeded but a couple of days when Dubassy, who had been complaining, suddenly died. The captain of the steamer proposed to return to port in order that the officer might be interred, but the widow strenuously insisted that the ship should continue. She said that she did not like the risk of turning the vessel back, and demanded that the body be cast overboard. This was done, and the vessel reached Europe in due time. In a year or two she drifted back to New York, where she was involved in a scandal with some actor, which was published in the papers at the time and created a great sensation.

After this she went again to Europe, and met and married Baron von Hoque. There was shortly a scandal with him also, as it is said he was not faithful to her, and at one time gave her a beating. So she left him.

It seems that they led an adventurous life together. After departing from Von Roque, the lady became a woman of the world, and when last beard from was filling the equivocal position of "wife" of an attache of the British Legation at Teheren, Persia. James May-brick, who Is said to have been poisoned by bis wife, Florence Maybrick, the daughter of Mrs. Chandler, was well known and liked here and in New Orleans. He met the young lady in Europe.

A gentleman who was well acquainted with Mrs. Chandler during her residence in Mobile, stated yesterday that she bad a regular mania for collecting all sorts of poisons. In other words, she was a thorough amateur toxicologist. She had collected poisons from all parts of the world and took great pride in her collection which she bad in a fine cabinet with each piece carefully labeled. The gentleman in question once visited her bouse by invitation to inspect this result of a strange "fad." She entertained him for hours discoursing on the effect and nature of each deadly agent, and showed such an unusual knowledge of toxicology that ever after the narrator says be entertained a peculiar dread of the woman, fearing that some day she might be seized with a desire to experiment on him.

[“A Bad, Brilliant Woman. – Interesting Sketch of Carrie Holbrook Chandler’s Life. – How Social Success Led Her Into Scandal and Then to Murder – Suspected of Poisoning Two Husbands and Now Charged With a Third Murder.” Memphis Appeal (Tn.), May 24, 1889, p. 4] 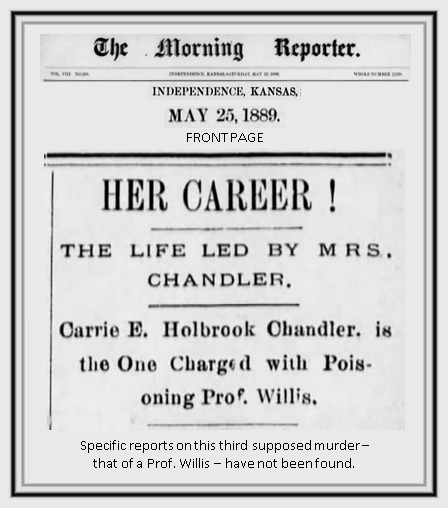 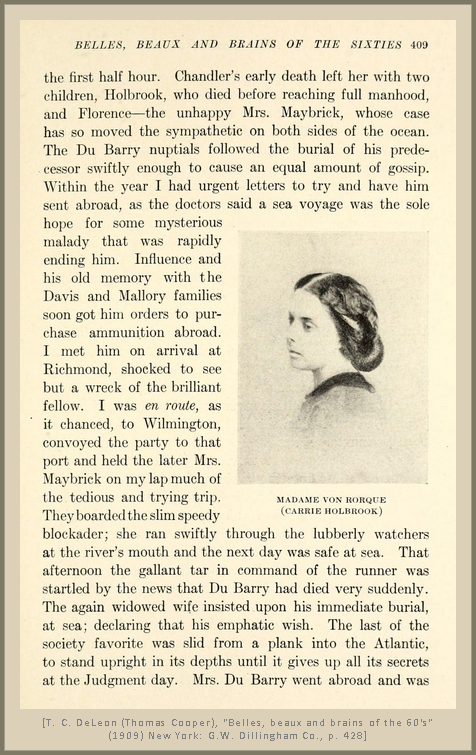