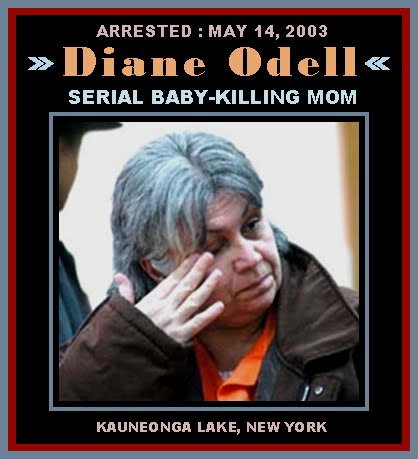 In a jail interview where she told a story jurors didn't hear, Odell said her domineering mother attended each birth and immediately took the newborns. Odell doesn't know whether they were born alive, only that she awoke each time to find a dead child.

"This is hard," Odell said, pausing to collect herself as she sat in the visitors' room at Sullivan County Jail. "To know that I didn't do this."

For 10 years she'd carried the dead infants with her, wrapped and boxed secrets as she and her family moved around the Northeast and then the west where she stashed the remains in a storage locker. When hard times sent the family eastward again, Odell had seven living children, an ailing mother and no money to pay the storage bill or return for the babies, she said.

"When you love somebody or something, do you take them and bury them where you can never see them again?" Odell asked.

One day, she said, she hoped to get back to Arizona, recover her babies and bury them properly with headstones, she said.

In 1993, Odell followed her common law husband Robert Sauerstein from Pima, Ariz., to Lytle, Tex., where he'd gone for job. Two years later, she called the owner of the storage business, but the shed contents had been removed, eventually to be sold. The remains ended up in a shed near Safford, about 150 miles east of Phoenix near the New Mexico border.

For most of the next eight years in upstate New York and northern Pennsylvania, she didn't know what had happened to the bodies.

"Did you take any of your things out of the storage shed?" Arizona investigator Diane Thomas asked her last May, only days after its contents were auctioned and the bodies found.

"Some of the kids' clothing," Odell answered. "Um, I remember it wasn't very much because there wasn't very much room in the car and there was no one to drive a truck or anything. So we just took what we could fit on top of the car for the kids."

On Dec. 16 in a courthouse at the southern edge of the Catskills, a jury of nine women and three men convicted the 50-year-old Odell on three charges of second-degree murder, deciding she had shown depraved indifference to human life. At sentencing on Jan. 27, she'll likely get 25 years to life in prison.

The babies were fathered by three different men and born at Odell's apartments around Kauneonga Lake in 1982, 1983 and late 1984 or early 1985. Her surviving children, three earlier from husband James Odell and five since with Sauerstein, were born in hospitals.

Odell also gave birth in 1972 to a baby who died and whose body was found in 1989 in a suitcase in the trunk of a junked car. Police investigated then and cleared her of wrongdoing. Odell says the child was stillborn at her mother's upstate home, after her father, who may have been the baby's father, beat her at his home in Queens. She says she didn't mean to leave that baby behind, either.

Odell says her mother Mabel Molina, a former hospital housekeeper who lived with her until her death in 1995, insisted she have the first out-of-wedlock baby at home in 1982. Planning to go to the hospital for the next one, her water broke in the bathroom, the pain was excruciating and her mother never called for an ambulance, she said.

The third time, Odell planned to drive herself. With contractions still far apart she had coffee with her mother. She said she soon felt dizzy, perhaps drugged, went into the bedroom and didn't leave. Each time, she tried to follow when her mother took the newborns but couldn't.

Each time, she said, she woke to find a dead child with her.

"From the time I was 12, the only thing I ever wanted was to be a mom," Odell said. If the babies were born alive, she said, "I think my mother stopped them from breathing."

Sauerstein said as much in courtroom hallways but it never came out in court.

"She had no defense," Sauerstein said. "There was none."

"There really is no proof those babies were born alive," Schick said. He plans to appeal on grounds that police ignored Odell's early requests for a lawyer and that prosecution witness Dr. Michael Baden admitted there was no incriminating medical evidence in the mummified remains, signs of neither trauma nor congenital defect.

But Baden, the renowned New York City pathologist, offered an opinion, based on Odell's signed statement to New York investigators in May that she gave birth alone and heard the full-term babies cry. He concluded they died of traumatic asphyxiation.

District Attorney Steve Lungen argued that Odell killed the newborns, "babies she did not need or want," then kept the remains to hide the evidence.

Schick knew about Mabel Molina's role months earlier, but Odell was the only witness. Schick said he kept her off the stand because she would have had to contradict her statements to police and it would have opened her up to questions about the first dead baby.

She had told Arizona detectives that she didn't hear the babies cry and didn't remember cutting umbilical cords. She also said she should be punished.

"It's hard to live every day, every day," she said, "knowing that you have to look at yourself in the mirror and know that you didn't have the courage or the tenacity to stand up for three little kids that, who needed a mother, and a life because if, if my mother hadn't been alive, none of this ever would have occurred."

Her later account does not jibe with what Odell twice told police.

She told investigators she hid the pregnancies and births from her abusive mother, who baby-sat her three young daughters, lived nearby and even moved in with them during the third pregnancy.
Detectives even now say some of those statements seem unlikely.

"It was always incredible to me that a woman living with her mother or living in an adjacent apartment could pull off a nine-month pregnancy with her mother not knowing it," said New York State Police investigator Roy Streever. "I never believed that was the case."

Streever added that Odell probably would have never been charged with murder if she didn't acknowledge hearing the babies.

"I think that if you give birth at home, and even if you did black out immediately after the delivery even as she said she did after each instance," he said, "the child is not going to expire from lack of attention."

Streever said Odell had plenty of opportunity to discuss her mother's role and investigators asked about it. "Certainly Dianne Odell can say anything she wants now about her mother's involvement and it can't be disputed," he said.

Odell says she refused to disclose her mother's role to police until she had the chance to explain to her family about the darker chapters of her past, including teenage prostitution in New York City, visiting men whose names her mother gave her to help pay off Mabel Molina's debt to a loan shark.

According to Sauerstein, who met Odell in 1985, Mabel Molina lived with them for years. She was harsh, vindictive and had even referred to his and Odell's children as bastards, he said. His wife is a good mother, he said, and he doesn't believe she was any different before.

At sentencing, Odell is likely to face at least 25 years to life in prison, the maximum for a single murder count.

"This is hard," Odell said. "To know that I'm not going to see my children again."

Most of her children, who range in age from 4 to 25, have visited the jail. In Potterville, Pa., about a three-hour drive away, 17-year-old Maggie Sauerstein dropped out of high school to help look after the household and her younger brothers.

Odell hopes to be sent to a prison not too far away. She also plans to formally wed Robert Sauerstein, who has been visiting weekly, so New York will recognize the marriage and they can have conjugal visits. 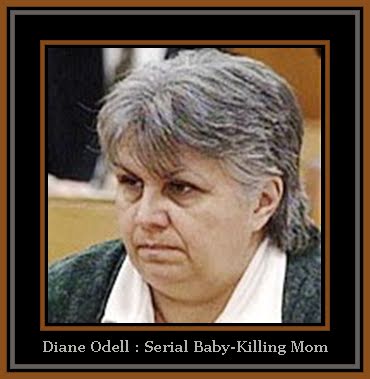 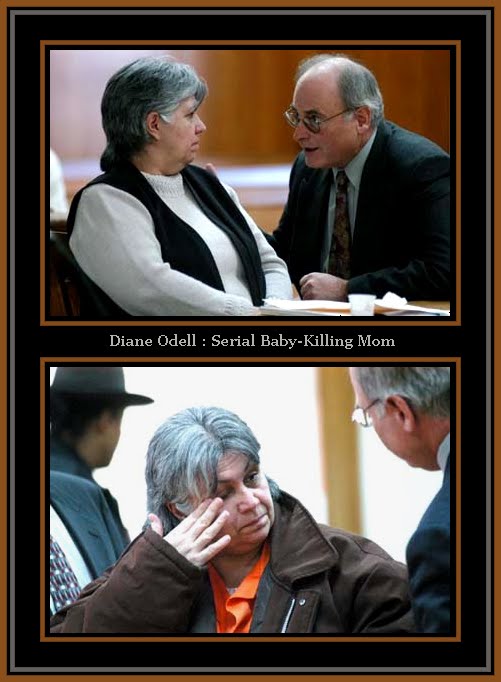 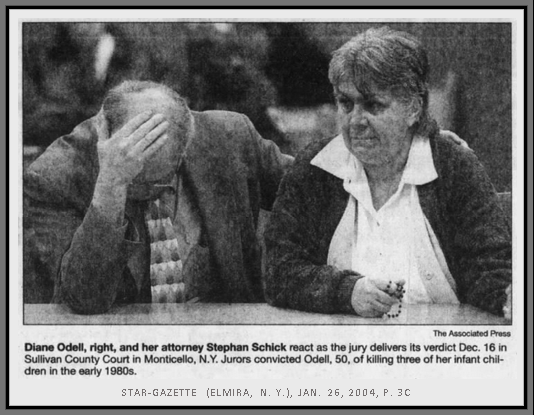