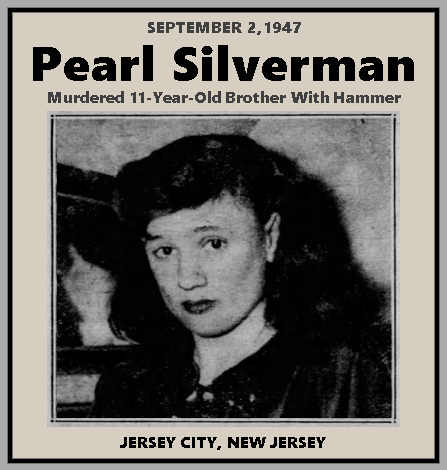 FULL TEXT: An 11-year-old Jersey City boy was found bludgeoned to death with a hammer in his home last night. Police hunted his attractive 18-year-old sister as the slayer.

The murdered boy was Albert Silverman, of 276 Claremont Ave. The sister, fought by police headed by Inspector Michael Cusack, was Pearl Silverman, described by Cusack as mental case.

Cusack said she had once struck Albert on the head with a stick. The murder weapon was described as a machinist's hammer.

The killing occurred while Albert's parents, David and Molly Silverman, were attending a movie. Cusack said they had left the youngster with Pearl but under the eye of another sister, Maxine, 16. Maxine left the house, however. When she returned at 10:45 P. M., she found the boy dead and Pearl gone.

A telephone had been ripped off the wall.

Silverman, who operates a quilt and bedding store, returned from the movie with his wife at. 11:15 P. M. Police told them what had happened. Mrs. Silverman became hysterical and her husband collapsed. They were taken to the Jersey City Medical Center with Maxine and detained. The father was placed in an oxygen tent.

Inspector Cusack said Albert had returned from Summer camp earlier yesterday. He was a sixth grade student at School 24. Maxine is a senior at Henry Snyder High School, from which Pearl was graduated. Cusack said Pearl, employed during the Summer at an orange drink stand, had spent some time in an institution.

FULL TEXT: Pearl Silverman, 18, hunted for 15 hours in the hammer slaying of her 11-year-old brother, Albert, in their home at 278 Claremont Ave., Jersey City, was taken into custody at 2:15 yesterday afternoon after detectives had traced a telephone call made to her home by a friend whose aid she had sought.

The girl, who had been accepted as a student by the New Jersey State Teachers' College in Jersey City, was questioned at length by Police Chief Charles Wilson at Jersey City headquarters and then taken to her home where she re-enacted the killing.

~ Had Been in State Hospital. ~

"I hit him with the hammer because my parents loved him more than they did me," Pearl told police. She admitted that she had been an inmate of the Marlboro State Hospital, near New Brunswick, from September, 1941, to June, 1941.

Albert was slain Tuesday night on the floor of the apartment shared by himself and his father and mother, Mr. and Mrs. David Silverman, Pearl and another sister, Maxine, 16. The parents had attended a movie, leaving the two girls with Albert. Maxine went out for a short time and on her return found her brother's battered body, a machinist's hammer nearby. Pearl had disappeared.

At 9 A. M. yesterday, the girl appeared at the home of Raymond Kurcieski, 20, of 402 Grove St., Jersey City, and asked him to telephone her home. He did so and Police Capt. James Carey answered the phone. The girl was picked up shortly afterward as she stood in front of the Kurcieski home with her friend.

Chief Wilson said that at police headquarters Pearl admitted hitting her brother with a hammer but quoted her as saying:

"When I left the house I didn't think he was dead."

Pearl was booked for murder at 4:55 P. M., a short" time after he reenacted the slaying.

She told Chief Wilson and Capt. Carey that Albert was asleep on J a daybed in the dining room of the apartment when "suddenly I got the urge to kill him."

She said she went to the kitchen and got two hammers and smashed the sleeping boy on the head. He rolled to the-floor, she said. Then she left the apartment.

Until early yesterday morning, she roamed Jersey City streets. Finally, she wearily climbed into an automobile in a lot on Montgomery St. near Summit Ave. and slept until after daybreak. At 9 A. M., she went to the Kurcieski home.

It was learned that Pearl was committed to the Marlboro State Hospital by her parents.

Dr. J. Berkeley Gordon, medical director of the institution, had this to say of the girl:

“I would describe her as a rather unhappy, maladjusted, mean, cantankerous child who didn’t like anybody, who broke dishes and threw things when she would go into one of her violent tempers. I wouldn’t say she was any worse than some of our children. She didn’t get along with anyone.”

Pearl was discharged from the hospital in custody of her father, who told authorities he was moving to Arizona for his health and wished to take her with him.

FULL TEXT: Staring at the floor, Pearl Silverman, 18, waived examination and was held without bail for the grand jury yesterday in Jersey City Criminal Court on a charge of murder in the hammer death of her brother, Albert, 11, Tuesday night.

Funeral services were held at 2 P. M. in the Apter Funeral Home in Newark for the boy whom she "hated because he was loved more." Her mother and sister, Maxine, 16, both overcome by grief, attended the simple ceremony and the later burial in Hebrew Cemetery, Newark. The father, David, still was at Jersey City Medical Center for treatment of a heart attack suffered after the slaying in the Silver man home at 278 Claremont Ave., Jersey City.

Back in 1941, Pearl fractured her brother's skull with a small iron statue, officials of Marlboro, N. J. State Hospital said yesterday. She was a patient there for three years after that, being described by a state psychiatrist as "an unhappy, cantankerous child who didn't like anybody."

FULL TEXT: DEFENSE counsel indicated yesterday that a plea of not guilty by reason of insanity will be offered for Pearl Silverman, 18, when she goes on trial today in the Court of Oyer and Terminer, Jersey City, on a charge of murder in the slaying of her 11-year-old brother, Albert. The state will charge that the girl bludgeoned the boy to death with two hammers as he lay asleep in their home at 278 Claremont Ave., Jersey City, last Sept. 2. The youngsters' parents, David and Molly Silverman, were at a movie. Miss Silverman, police say, admitted killing her brother because she was jealous. But her lawyers maintain they will be able to prove mental instability because she had previously spent two years in a mental hospital.

FULL TEXT: Displaying no emotion, 18-year-old Pearl Silverman stood yesterday in Hudson County Court, Jersey City, and heard Judge Paul J. Duffy sentence her to life imprisonment for the brutal hammer-murder of the 10-year-old brother she had hated all her life.

The dark-haired girl, who had told the court she killed her brother, Albert, as he lay asleep in their home at 278 Claremont Ave., Jersey City, because “our parents gave him more love than they gave me,” will serve her sentence in the New Jersey Reformatory for Women at Clinton.

Although prosecution and defense described the defendant as psychotic, the court ruled she knew right from wrong. She pleaded no defense.

Albert was slain while his parents were at a theatre on Sept. 2, 1947. 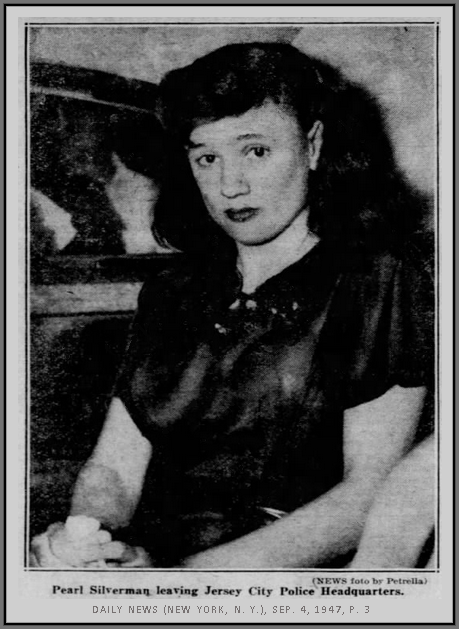 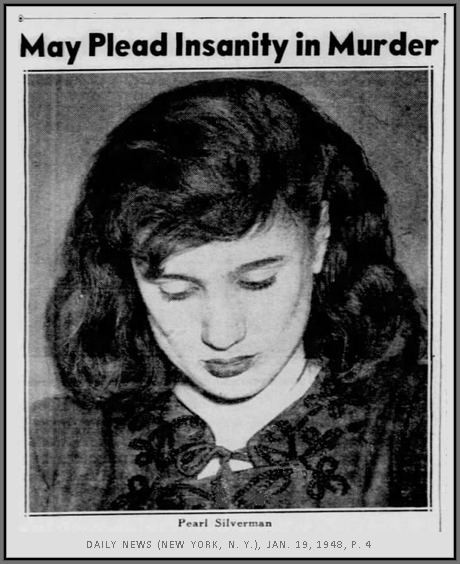 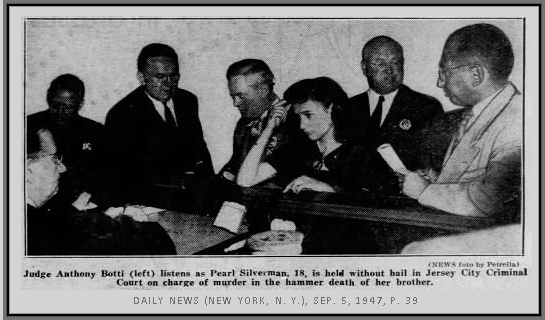