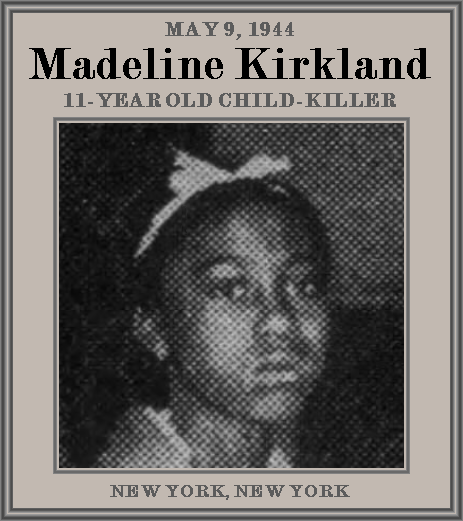 FULL TEXT: Madeline Kirkland, a Negro girl of 11, stood in Homicide Court yesterday and with a bored air read a newspaper account of a murder. Finally, she looked up. “The paper’s all wrong,” she said. Madeline should know. She was accused of murder.

Youngest person ever arraigned in that court, Madeline appeared before Magistrate Robert F. Mahoney on a homicide charge arising from Harlem’s “Tattle-Tale Murder.” She was accused of fatally stabbing 9-year-old Margaret Patton, also Negro, in the recreation room of School 119 at 257 W. 133d St. on Tuesday.

Madeline said nothing to the Magistrate. But her mother did. Mrs. Erma Kirkland, 26, of 550 W. 146th St., tried to explain what made Madeline tick. It wasn’t easy.

“Madeline has been acting strangely since our home burned while I was working,” Mrs. Kirkland said. “She nearly burned to death. She has always been a good girl. Helped with the house-work. The only trouble at school was her temper. I can manage her at home, though.”

She paused, then continued the history of Madeline. Mrs. Kirkland and her husband separated when Madeline was a baby. “I denied myself everything for this child,” she said. “I warned her not to make friends with strange children.” She added that Madeline had the mind of a child of 4.

“I can’t understand how it all happened,” the mother said, helplessly.

“Perhaps those who are interested in juvenile delinquency would do a whole lot better if they taught children the moral values of life – the right or wrong,” the magistrate said. “They can’t learn that playing games on slides or swings, or in playgrounds.”

Madeline, who was spared the ordeal of the police lineup, was held without bail pending another hearing next Wednesday. She was sent to the Brooklyn Children’s Shelter. Eileen Fiostor, Madeline’s 12-year-old Negro schoolmate, wasn’t in court. Eileen, accused of holding Margaret while Madeline did the stabbing, was arrested on a juvenile delinquency charge.

FULL TEXT, May 26 – Two negro girls held in connection with the fatal stabbing of 9-year-old Margaret Patton, a schoolmate, were remanded to the Society for the Prevention of Cruelty to "Children today at hearings in Children's Court, to await disposition of then-cases.

Justice Theodore Stitt ordered that Eileen Foster, 12, who, according to Madeline, "pushed" her hand and "made" her stab Margaret, be returned to court June 22.

A charge of homicide against the Kirkland girl was dismissed last Monday. 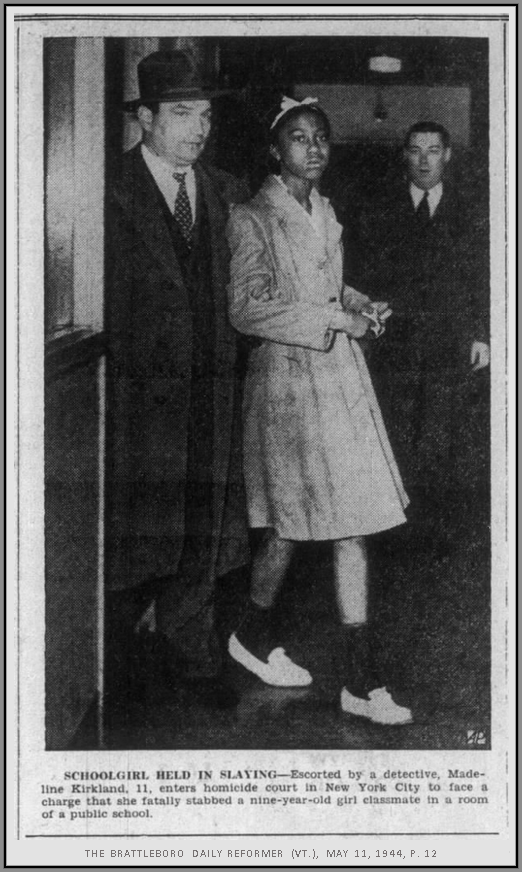