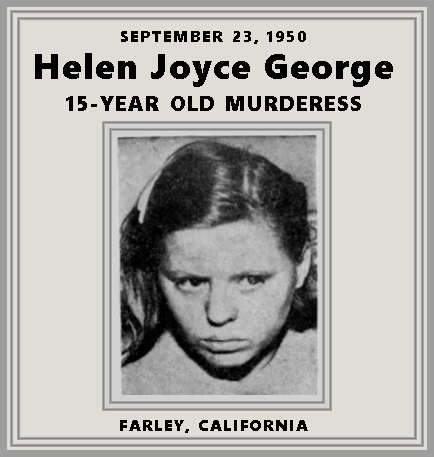 She was fleeing in terror from the voices which kept her to kill people.

“I wanted to kill somebody awfully bad,” she said, matter-of-factly. “So I killed old Sam back in the hills.”

Incredulous at first, officers followed her directions to the mountain cabin of Samuel Walitch, 70, a pensioner living alone twenty-three miles north of Willits.

They found Walitch sprawled dead before his kitchen stove, a bullet hole behind his left ear. A pancake turner was still clutched in one hand.

She had been staying with her grandmother, Mrs. Helen Heltz, on the Robert Harkey ranch near the hamlet of Farley. Saturday morning Mrs. Heltz and Harkey left her to go to Willits.

“I had a desire to kill,” she said. “I wanted to kill my father, but was down in Santa Rosa.

“The feeling I wanted to kill someone got stronger and stronger.

“I took Harkey’s pistol and hiked two miles up to the trail to see Sam. We talked awhile in his yard and when he went into the cabin I followed him.”

Walitch decided to cook a bite to eat. He stood at the stove with his back to the girl.

“While he stood there I put a shell into the pistol,” Helen Joyce said. “I aimed at the back of his head and fired one shot.

“Then I threw the pistol down and hiked back down the trail. I decided to tell the pastor what I had done.”

She arrived early yesterday at the home of the Rev. Peter E. North, pastor of the Assembly of God Church of Willis.

At intervals between questioning, the girl chatted smilingly with attendants of the juvenile detention home in Ukiah and thumbed through comic books.

She was transferred to the Mendocino State Hospital for temporary safekeeping later, after she spoke of suicide.

Sheriff Broaddus said the girl may be a mental case.

She was admitted to the Napa State Hospital on February 28, 1949, after the episode at school, as a “possible psychopathic.”

She was discharged as “improved” a month later in the custody of her mother. Mrs. Viola George of 1253 Morgan Street, Santa Rosa.

Sheriff Broaddus said Mrs. George is presently in the Sonoma County Hospital with a broken ankle.

District Attorney James Bush of Mendocino County said the girl will be certified to juvenile court for disposition. A murder charge is not contemplated because of her age and case history, he said.

FULL TEXT: Ukiah, Sept. 25. – Fifteen year old Helen Joyce George, who killed under the compulsion of inner voices, was today made a ward of the Mendocino County juvenile court and returned to her insane asylum cell while authorities conferred about her future.

The strange, empty-faced little girl who “wanted to kill somebody awful bad,” on Saturday shot to death a 70 year old pensioner, Samuel Walitch, in his cabin, twenty-three miles north of Willits.

Her compulsion satisfied, she confessed to a Willits minister and then to police.

In today’s brief preliminary hearing, Police Judge Will Van Dyke made her award of the juvenile court, and Superior Judge Lilburn Gibson signed an insanity affidavit permitting Helen Joyce to be retained at the Mendocino State Hospital for the Insane.

It was not the first time Helen Joyce had seen the inside of such a home. In 1949 she was committed to the Napa home after screaming in terror at school one day that “voices are telling me to kill people.”

Later she was released as improved and sent to live with her grandmother, Mrs. Helen Heitz, on a ranch near Willis.

It was from there that she walked to Walitch’s cabin and shot him in the head as he prepared his evening meal.

FULL TEXT: Ukiah, Sept. 30. – A hearing on a murder charge brought against 15-year-old Helen George has been set for October 13.

The girl is charged with the deliberate shooting of Samuel Walitch, 70, on his ranch near Farley, last Saturday.

Officers said the girl told them she felt “just had to kill someone.” She once was an inmate of a mental hospital.

The hearing on the murder charge will be a formality rather a mental hospital.

Helen will appear with officers of the Mendocino county probation department. After the formality of the law has been satisfied, court attaches anticipate she will be declared mentally deficient and that the case then will be transferred to the Sonoma County juvenile court. Her parents live in Santa Rosa.

The girl obsessed the murder of Samuel Walitch, 70, on his ranch near Farley on September 30.

FULL TEXT: Santa Rosa, Oct. 19. – Helen Joyce George, 15, who says she slew an elderly pensioner because inner voices told her to kill, was committed to the State Hospital at Napa today.

Superior Judge Donald Geary, sitting in juvenile court, made the commitment for ninety days, so that State psychiatrists may recommend what to do with the Santa Rosa schoolgirl. Helen shot Samuel Walitch, 70, in his cabin twenty-three miles north of Willits, September 23. She had a patient at the Napa Hospital before, but was discharged as “improved.”