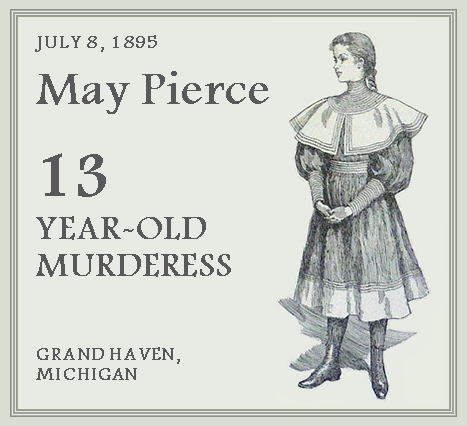 FULL TEXT: Grand Rapids, Mich., July 9. – Mrs. Levi Pierce, over 60 years of age, was found lifeless in her home, two and one-half miles southwest of Berlin, yesterday. She had been strangled to death. Last night George Keesbro, her 19-year-old grandson, was taken to the county jail at Grand Haven, in the belief that he was concerned in the tragedy. To-day May Pierce, the 13-year-old daughter of the murdered woman, was also taken into custody and conveyed to jail.

Yesterday Levi Pierce went to work on the farm of a neighbor, leaving the daughter and grandson, who had been living with the family, at home with Mrs. Pierce. About 10 o'clock the daughter. May, ran across the fields to her father and told him to come home at once, as she feared that her mother was dead. Pierce, accompanied by the neighbor and his wife, hurried to the house and found the unfortunate woman lying lifeless on the kitchen floor. The grandson had vanished. There were many evidences of a struggle for life in the room, though the floor had been freshly mopped and a hasty attempt made to restore the surroundings to their normal condition.

Mrs. Pierce was lying near the kitchen stove. There was a large, deep gash in her chin, penetrating to the bone, and several teeth had been knocked out. Her neck was swollen and blackened on either side, showing beyond question that she had been choked to death. So visible had been the pressure of the hand that strangled her that blood had settled in clots on the inside of the throat. The fragments of a broken bottle were strewn on the floor and it may have been with this as a weapon that the gash in the chin was inflicted. The body was still limp and warm when found and a doctor was sent for in the hope that possibly life was not extinct. Before his arrival, however, the body had stiffened in the rigor of death, and there is no doubt that life had departed before the husband reached home.

The missing George Keesbro had struck off across the fields and turned up in Berlin before noon. He went to the post office and after transacting some trifling business there, started for home on the highway. On the way he met the doctor, who was returning from the Pierce home and who informed him that his grandmother was dead. He was taken into custody soon after.

The local officers sent for the Ottawa county sheriff and prosecuting attorney and an inquest was held. May Pierce testified that some time after her father and she and George went out to drive the cows to pasture, and on her return found her mother living in the kitchen, apparently dead. The grandson's testimony was substantially the same in the main, but their statements conflicted in details, though both stuck stoutly to their stories. The theory that Mrs. Pierce was murdered by tramps, which would be the natural sequence of the statements made by the daughter and grandson, was rejected by the officers. No tramps had been seen in the vicinity and the freshly-mopped floor and other attempts to cover up the disarray in the kitchen effectually disproved of this supposition in the officers' minds. They preferred to work on the theory that the grandson and daughter became involved in a quarrel with Mrs. Pierce over some trifling matter until, in a fit of ungovernable rage, the old woman was knocked down and then choked to death. The coroner's jury rendered a verdict of death from strangulation and the arrests followed.

[“Was Choked To Death Mrs. Levi Pierce Murdered Ix Ottawa County. Her Daughter And Grandson Arrested On Suspicion. They Claim That The Deed Was Done My Tramps. The Surroundings, However, Go to Disprove Their Story.” The Detroit Free Press (Mi,), Jul. 10, 1895, p. 1]

FULL TEXT: Grand Haven, Mich., Sept. 6. – May Pierce, the 13 year old girl was found guilty of manslaughter this morning. The child is accused of being an accomplice of George Chesborough, aged 18, in the murder of her mother on July 8 Chesborough was convicted and is now serving a life sentence.