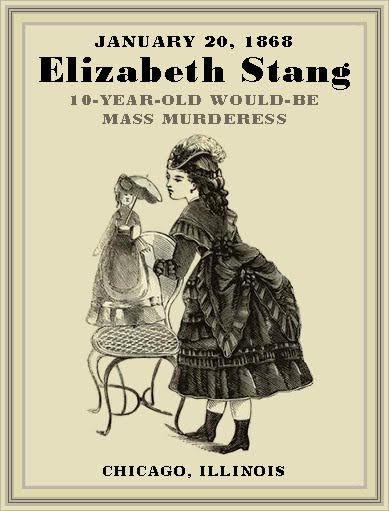 FULL TEXT: From the Chicago Journal of the 20th, we extract the following particulars of a fearful tragedy, information of which we have already published in our telegraphic columns:

Residing at No. 340 Church street is a family named Stang. The head of the family, Andrew Stang, is an industrious, well-to-do German gardener, and has by hard work and economy amassed a considerable sum of money. His family consists of a wife and five children. Of the latter, Elizabeth, who bears her mother’s name, and whose age is 10, the eldest. It is Elizabeth who, dead to all impulses of affection, is charged with having attempted to consign her dearest relatives to premature death. It appears that she has always been a source of ceaseless anxiety to her parents. From her earliest infancy she has displayed an an irresistible inclination to steal anything of the slightest value which came within her reach. As she grew older; this evil propensity more fully developed, until at last she reached a point entirely beyond restraint, and it became necessary to have her arrested, which was done, and for a year she was confined in an asylum, in hopes that that course might work a reform.

But this step failed in accomplishing the desired purpose, for after her release she persisted in her course of depravity, and on every opportunity which presented would steal from anybody with whom she came in contact. Her mother was a constant victim to her rapacity, and only two weeks ago Elizabeth robbed her of $20, and more recently still of various other sums of money. With the fruits of her dishonesty she would leave the house and not return until it had all been spent. Each time that she came back her parents received her with open arms, hoping over and over again to reform, by their counsel, the child who to them was all the world, in spite of the dreadful trouble and anxiety she caused them continually.

Matters went on thus up to Saturday, when the deed which has shocked the community at large was perpetrated. She happened to be at home. On that day it devolved upon her to cook the dinner. While preparing the coffee, a younger sister, named Kathrina, noticed a white substance floating on its sur face, and asked what it was, and was told that it was only some flour, the meal was at last ready, and the whole family, excepting Kathrina, consisting of Mr. and Mrs. Stang, Rosa, aged twelve years, and Andrew, four years, sat down to partake of it. Several of them noticed that the coffee had a peculiarly bitter taste, but all drank of it, the father drinking the whole of a large cup full, the mother and Rosa taking about half a cup each, and the little boy drinking quite freely of it. It soon began to do its work, and the mother remarked that she feared they were poisoned, but Mr. Stang only laughed at the idea. He was, however, speedily undeceived, for soon the whole family were taken with the most violent vomiting and retching, and now, thoroughly alarmed, medical assistance was called, Dr. J. Milton bowers being summoned.

He arrived at the house at a few minutes past two o’clock, about half an hour after the meal was eaten. A most horrible scene presented itself. Father and mother, daughter and son, were writhing in intense agony; the little boy was apparently in the last agonies of dissolution, the extremities cold and pulseless. Little Kathrina, who alone had not partaken of the deadly mixture, witnessed the awful scene. She was stricken with terror. The doctor expressed his opinion, from statements made in regard to the peculiar taste of the coffee that strychnine had been administered to tho sufferers. He employed the usual antidotes, and, after hours of labor, finally saved the poisoned patients.

Elizabeth, in the meantime, had thrown away the coffee that had not been used, and escaped. The doctor found it necessary to procure a sample of the death-bearing mixture, and learning where the would be murderess had thrown what had been left, succeeded in collecting sufficient for purposes of analysis.

Detectives were employed to ferret out the fiendish daughter, and subsequently, succeeded in arresting her.

It is a difficult matter to form any conclusion as to the motives which induced Elizabeth to commit the horrid crime. She asserts that her parents treated her in a harsh and cruel manner; that her father made her work very hard, compelled her to peddle vegetables for years past; that her mother used to swear at her in a horrible manner, call her bad names and constantly threaten to send her to the Reform School; also that her mother used to beat and abuse her so that owing to the noise the neighbors would gather round the house. On Saturday morning she says her mother beat her in a brutal manner. She denies having put any poison in the coffee and says she believes that her mother did it. The strychnine had been bought by her at her mother’s request that morning, to be used in killing rats.

This morning the victims are in a comparatively comparatively condition, and are undoubtedly past all danger. The girl will be arraigned at the Armory this afternoon. As those poisoned are not able to appear against her, she will be formally remanded to jail to await their recovery.