Catherine Manz, Poisoned Her Sister Because Her Dresses Were Prettier – Pennsylvania, 1910 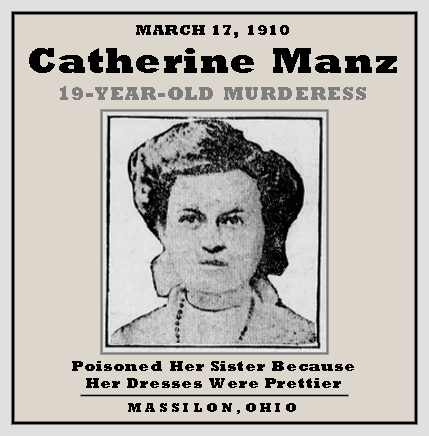 FULL TEXT: MASSILLON, O., March 19. No trace had been found to-night of 16-year-old Catherine Alice Manz, who disappeared from her home here yesterday and whose sister, Elizabeth Manz, was found dead last night by Goodhart Manz, their father, on the floor of the kitchen. After all clues have been carefully considered the indications point strongly to murder.

Coroner Harry March, of Canton, who performed an autopsy this morning, expresses certainty that the girl died of strychnine poisoning or that some equally powerful drug was used. As to whether the girl committed suicide or was murdered, opinion is divided. Coroner March will settle the question of what drug was used by having an analysis mad of the contents of the girl's stomach.

John Manz, I8 years age, a brother; Pauline Manz, 17 years old, a sister, and the father, says Elizabeth, had been happy over the prospect of meeting In Detroit next week her fiance, said to be Lee Fair, formerly of Canton. They say there could have been no Jealousy over Farr between the two girls.

The only ground for suicide, advanced by members of the family, is that Elizabeth had grieved over the conduct of her sister Catherine, with whose care she was charged. The girls, it is said, frequently quarreled about the younger girl's behavior. The mother had been dead 15 years.

It was learned to-night that Catherine Manz bought one drachm of strychnine from the Massillon Drug Company on February 21. She said she wanted to kill a dog. This Is shown by the poison register of the drug store

Catherine had prepared and served breakfast to her older sister yesterday morning. Mrs. Mary Wagner, a neighbor, says that Friday morning an automobile was driven to the Manz house by a strange man in an automobile coat and that he stayed at the house a short time. The neighbors do not know what occurred while he was there. Chief of Police Ertle attaches no importance to the visit of the automobilist. He declines to give his theory of the case and is exerting every effort to locate the missing girl who, he thinks, can explain the mystery. He thinks she is in Canton and has asked the police of that city to search for her.

FULL TEXT: Akron, O., March 21. Catherine Manz, the girl who disappeared from Massillon Friday afternoon, shortly before her sister was found dead on the kitchen floor of their home, was found here by the police and others about 10 o'clock this forenoon.

She was taken in charge by Detective Harry Welch and was detained at the police station, pending the arrival of Chief Ertle from Massillon.

As up to the time of her arrest no charge had been preferred against her she was not at first questioned with regard to the death of her sister. She was asked however, to give an account of her movements since arriving here, and this she did.

According to her statement to the po lice here she arrived m the city about 7 o'clock Friday evening and went to No. 612 Sherman street. Looking for rooms. It was stated that while there she had asked for a Massillon friend of her’s. Carl George, supposed, to be Greek and who roomed there. She informed that George was in.

She then asked if she could remain during the night and was told there was no accommodation. She was directed however, to No. 305 Sherman street, a rooming bouse kept by Marry Rosenbloom, and there she spent Friday night, giving her name as Ethel Morgan.

On Saturday morning, again under the name of Ethel Morgan, she went to the plant of the B. F. Goodrich Rubber Co., where she made an application for work. She was told to come again morning, and in the meantime she was told that there was good rooming house at No. 693 Rhodes avenue, kept by F. R. Heller. She went to the new rooming house, told Mr. Heller that she was probably going to work at the rubber plant. this morning, and was assigned to a room there. she stayed in the house for the rest of Saturday and lo yesterday.

This morning shortly before 7 o'clock she left the house and made application at the rubber plant. She gave the name of Ethel Morgan again, but the suspicion of the employment agent had been aroused and he began to question her closely. She became confused in her answers, but was asked to enter the plant.

When she had done son, the police were notified and Detective Harry Welch was hurried to the plant. It was stated that, after he had had a conversation with her, she admitted that her name was not Ethel Morgan, and on being asked to give her right name, it was stated by the police that she wrote, "Catherine Manz."

She remained in the plant for a little time until she had recovered from the experience she had undergone and then with splendid nerve, told the detective she was ready to go wherever she was wanted. The two went to the police station here, where she was immediately closeted with the chief of police.

~ NOT QUESTIONED ABOUT SISTER. ~

In his private office she again detailed her movements since coming to this city, making what she termed one or two corrections, she denied having asked for George at the first house she visited on Sherman street and she denied knowing George or that he had been a friend of hers.

While the girl was waiting in the private office she made a good impression on the police officer who happened to see her or who talked with her. One of them, in talking about her  later, declared that judging from her calm, unruffled demeanor and from her manner of talking personally he did not think she would be guilty of any serious crime. "She is a pretty girl," he added, "and. to me, looks innocent."

Massillon. O., March 21. A warrant was issued - this morning by Mayor Charles J. Remley for the arrest of Catherine Manz, charging her with the murder of her sister. Elizabeth, by the administration of some deadly drug.

The warrant was given to Chief of Police E. M. Ertle, who left for Akron, where the girl is under arrest. She will be brought to Massillon this afternoon and sweated.

FULL TEXT: CANTON, Ohio, Dec. 13—Katie Manz, 16 years old, is literally CRAZY about clothes. And that
very fact, which gets so many women into pecks of trouble, will save Katie from a terrible fate, for Katie is an accused murderess, charged with poisoning her older sister at Massillon last spring.

Five alienists have examined Katie in jail here, and unite in declaring her mind is absolutely absorbed by a diseased- vanity that finds expression in an abnormal passion for things to wear —clothes and jewelry. She's fairly good looking, and seemingly intelligent, but is obsessed about clothes.

Her mania grew out of peculiar conditions. Katie was the house hold drudge, slaving from early morning till late night like a modern Cinderella. Her older sister had good clothes and beaux. Katie had nothing but drudgery. Life was one terrible drab horizon for her, a dreary, weary round of toil and soul-starvation. The child's natural longing for pleasure, for pretty things, for sunshine, for happiness, was crushed. Yet in the very same house her sister enjoyed all these things.

Suddenly the older sister died. The autopsy revealed poison. Strong circumstantial evidence accused Katie. Stunted and repressed by the conditions under which she lived, they say this child's jealousy
drove her to murder her sister who had all the bright things she craved and was denied. Young as she was, she must stand trial for murder. Conviction meant the electric chair for this 16-year-old girl.

Katie denied the murder charge, yet it seemed to weigh upon her not at all. During many months in
jail she talked and thought of little but clothes. She was delighted when anyone sent her something pretty to wear. She had no horror of the coming trial, except that she might have to appear in ugly clothes. Interested persons helped her, and Katie made, with her own hands, a modish gown and a stylish hat, to lie worn in court.

Her story attracted the attention of Harry LaDue, a young man in Saginaw, Mich. He wrote to Katie. A correspondence developed. He asked Katie what she most wanted. "Pretty clothes," wrote Katie. Then LaDue came to Canton to visit Katie. When she saw her admirer Katie changed her request to what seemed the height of luxury – a gold watch. LaDue bought it for her. Then Katie promptly refused to see LaDue again. She had what she wanted, something pretty to wear.

The report of the alienists will quash the murder proceedings and result, in the girl's detention in an asylum. 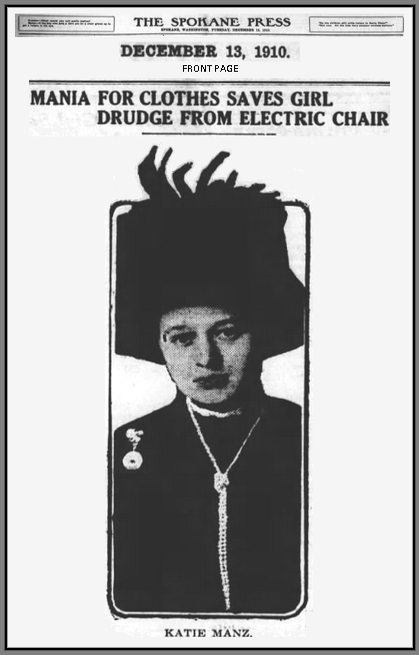 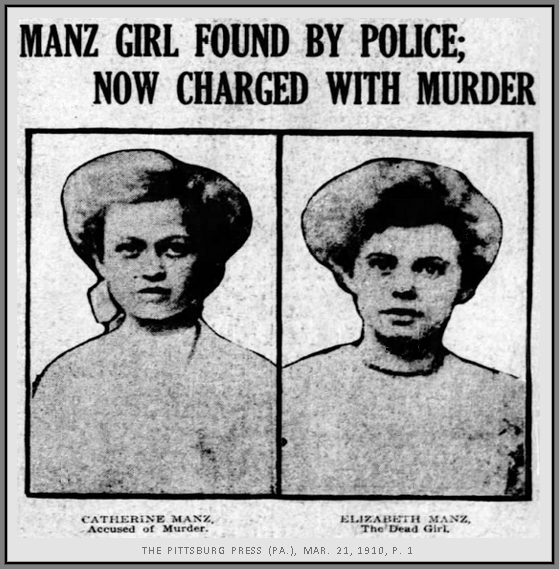 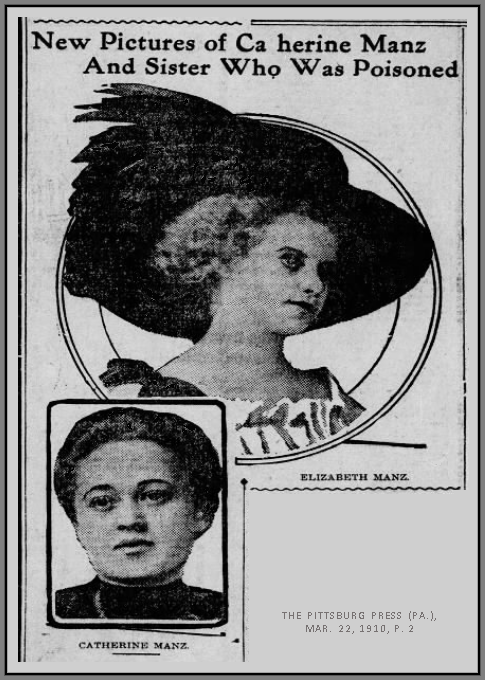 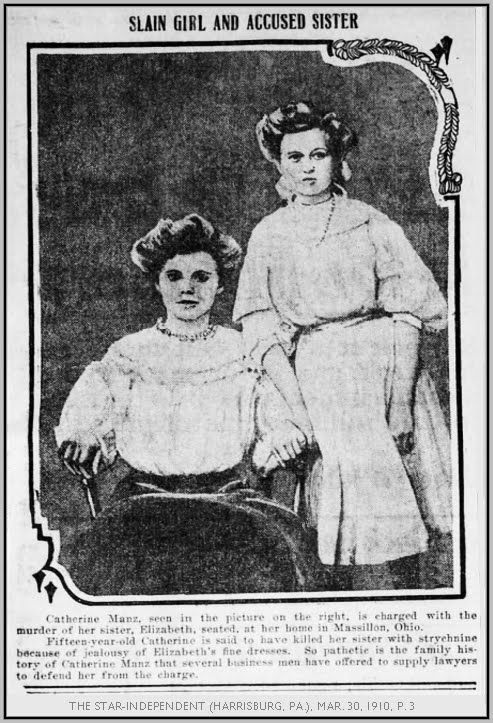 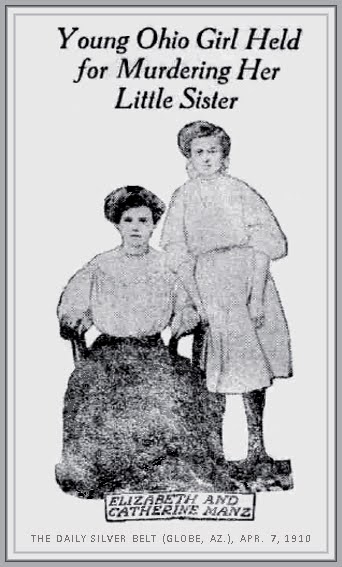