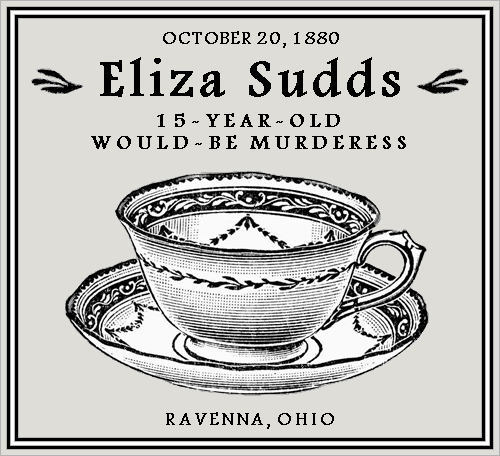 FULL TEXT: Cleveland, October 20. – A strange case of youthful depravity came to light here to-day. Eliza Sudds, fifteen years old, a domestic employed in the family of J. J. Crooks, her eighteen months old babe and Mrs. Gage, where she worked at the Commercial hotel as chambermaid. She became intimate with a colored waiter named Wilson, and four weeks ago both disappeared. It has been ascertained that Eliza went to Milwaukee and it is supposed that Wilson went with her. Eliza returned here two weeks ago, but Wilson’s whereabouts are unknown.

The girl found a place as a domestic, as above stated. Sunday Mrs. Crooks was suddenly taken sick, and the babe was also taken sick, and the babe was also taken sick, and the babe was also taken sick at about the same time. Monday night a physician was called, who pronounced it a case of poisoning. The cause of mystery to the family was that Mrs. Gage, called in as nurse, yesterday, this morning was taken with the same symptoms. Suspicion then fastened upon Eliza, and this afternoon she was detected by Mr. Crooks pouring a white powder into a cup of tea the nurse had poured out. He stepped towards her, when she quickly turned the tea into a pan of dish-water, emptied the pan and wiped ity, but Mr. Crooks found in her hand a piece of paper with the advertisement of a drug store named on the paper, where the prescription clerk failed to identify her, but said that on Saturday he sold arsenic to a woman, who gave her name and residence. Inquiry at the place as given showed that no such person lives there. The girl was taken to the police superintendent’s office, but while momentarily unwatched, she made her escape. The police were at once notified, and this evening she was found at Newburgh station, in the train bound for Pittsburg, and she is now safely in prison. Her motive in poisoning cannot be imagined. To-day, when she packed her effects in a bundle, which she secreted. It was discovered, and in it was found some stolen articles of wearing apparel. The victims of this juvenile Lucretia Borgia are now considered out of danger.

FULL TEXT: The jury in the case of the State vs. Eliza Sudds, on trial during the latter part of last week and the first of this, in Cleveland, on a charge of poisoning the family of her employer, returned a verdict of “not guilty.” The defense was conducted by W. B. Thomas, of this village.