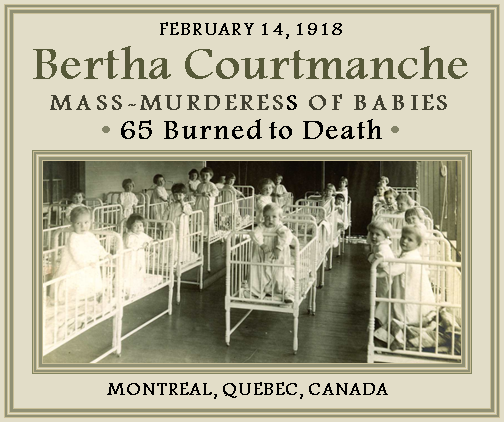 FULL TEXT:  Montreal, Sept. 19. - The disastrous fire of the Grey Nunnery on February 14 last, in which 65 victims were burned to death, was purposely caused by a female orderly of the Institution, Bertha Courtmanche, who was supposed to have perished in the flames. The woman was still working at the institution this afternoon when she was arrested. After keeping Courtmanche under observation at the Grey Nunnery for a week past Detective Proulx, of the Provincial police department, taxed, taxed the woman with the crime and obtained a full confession last night. She was arraigned on a charge of arson.

“I crept out of bed,” she told the police, “and set fire to a pile of newspapers, which I had placed behind the radiator in the room where the babies were sleeping. The curtains caught fire then I went back to bed. God knows why I did it. After I had in bed some minutes I heard cries of ‘Fire’ and rushing back to the nursery in my night clothes I carried two of the babies to safety. I was then taken to the Khaki Club for the night, and afterwards to the Notre Dame Hospital, where I was sick for two days.”

Courtmanche admits having made two other attempts to set fire to the Nunnery. She is a woman of 27 and is well connected in the Eastern Townships, where she has lived most of her life. she came to Montreal in February last to enter the service of the Grey Nunnery as an orderly it the babies’ orphanage. Her removal to Montreal was brought about, the police state, as a result of a discovery that she possessed fire mania, and had attempted incendiarism in her home.