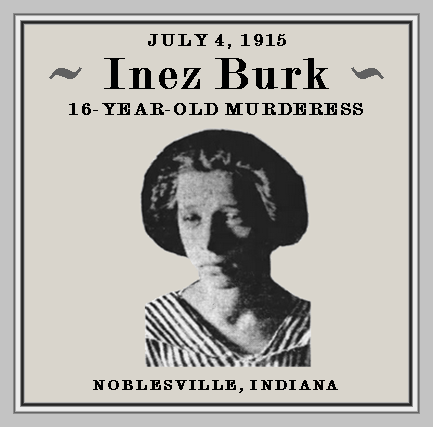 FULL TEXT: At five o’clock Wednesday evening the grand jury returned a truer bill for manslaughter against Miss Inez Burk, who has confessed to killing her mother, Mrs. Archie McClain, a week ago last Sunday by striking her on the head with an ax and cutting her across the face with a paring knife. The jury recommended the release of Frank Taylor, Miss Burk’s sweetheart, who accompanied her to Pekin, Ill., where they were arrested last Saturday afternoon [Jul. 15]. There was no evidence at all to connect Taylor with the crime and Sheriff Woddell has released him from jail.

Under the law Miss Burk, on the strength of her confession, could be sent to the Indiana Women’s prison to serve a sentence from two to fourteen years, but it is understood that the court officials have no intention of doing this. They desire to place her in some State Institution where she can have the advantage of schooling until she is twenty-one and by that time, it is believed, she will be able to see things in a different light.

A. H. Wells. Of Irvington, an insurance man well known over the state, was in the city Wednesday afternoon on business. While he is not a member of any church he has devoted much time during the past twenty years to helping the downtrodden and friendless. He had heard of the Burk and Taylor cases through the newspapers and while here called at the jail to see the young people.

Mr. Wells was accompanied to the jail by Mrs. Rex Jackson and they conversed with Miss Burk and Taylor for some time. Mrs. Jackson took a copy of “Freckles” to Miss Burk for her to read and gave her a bucket of ice cream. She also gave her some change to buy candy and in addition to encouraging her to form new associations she pointed out the advantage of an education and impressed upon her the necessity of going to school.

Mr. Wells gave words of encouragement to young Taylor and purchased several good periodicals for him to read. He discovered that the boy had considerable natural talent as a cartoonist and encouraged him to develop his talent.

Then Mr. Wells asked the couple what churches they attend. They told him and when they said not a single pastor had called upon them since they have been in jail he walked to the telephone and called up the two ministers who preside over the docks of which they are members.

“Here are two young people just dying for some one to say a good word to the, he told the pastors. “They tell me that you haven’t called on them. Why haven’t you? If the distance from your residence to the jail is too far for you to walk, just phone for a cab and send the bill to me. My address is Irvington Station, Indianapolis. Here is missionary work for you to do at home. I want you to give this matter your attention without delay.”

FULL TEXT: Miss Inez Burk, who killed her mother, Mrs. Archie McClain, two weeks ago by striking her two blows on the hand and slashing her face with a paring knife, waived arraignment before Judge Vestal at 5:00 o’clock Friday afternoon and entered a plea of guilty to a grand jury indictment charging her with manslaughter.

The court sent her to the Indiana Reform School for Girls at Clermont, Marion county, to remain until she is twenty years of age. She was sixteen on the 29th of last January. This sentence was agreed to by the court and Prosecutor Guy before arraignment, when it was understood that she would enter a plea of guilty.

She wore a white shirt waist with a pink skirt, a pair of white slippers and a blue straw hat with a bright ribbon completely encircling it. She sobbed at intervals during the fifteen minutes she was in the court room. On the middle finger of her left hand, she wore a gold ring. This ring, she told the officers of East Peoria, ll., when she was arrested, was an engagement ring given her by her lover, Frank Taylor.

In passing sentence on her, Judge Vestal was inclined to blot out the past in her live and hold up a bright future.

“This school to which you are going,” said the Judge, “is a correctional department of the Indiana Women’s Prison – a training school for girls – where you can learn to work and have other advantages of an education. The sympathy of the people generally is with you in your troubles. I don’t know all the ordeals through with you have passed. It is not necessary to put you on the witness stand and have you repeat your story again. I would rather the past be blotted out and look for the future. It is common knowledge that you have had a hard time in life and lots to contend with, but at the same time the law cannot pass over the crime to which you have entered a plea of guilty.

“I do not take it that you have committed premeditated murder. You are guilty of killing a human being, in the heat of anger. Look into the future and, so far as possible, forget the past. You are young.

“It is fortunate that the law has provided a place for just such girls. The object of the institution to which you are going is to help you. There will be instructors there, you will be given employment and not subject to the temptations which heretofore have been placed before you. In many trials of life, the darkest hour is just before dawn. Perhaps, in a measure, the past will be forgotten in the events of the future.  At least, it sometimes happens that way. I don’t know the rules of the school, but I am sure that the influence there will be for good. The life will be better than the one you have been leading.

“Society is not always able to seek out and find girls in distress until it is too late into to save them from the conditions by which they are surrounded. Whatever may be the rules of the school, obey them, and, in the course of time, I believe you will be glad you have gone there.”

The court appointed Mrs. Woddell to accompany Miss Burk to the school. They were accompanied by Sheriff Woddell and made the trip Saturday in an automobile.

[“Miss Burk Sentenced To Girls School Girl Who Killed Her Mother Will Stay At State Institution Four Years – Guilty of Manslaughter – In Commenting on the Case, Judge Vestal Said He Would Rather Blot Out Past and Look to Future.” Noblesville Daily Ledger (In.), Jul. 17, 1915, p. 1]

FULL TEXT: Sheriff Woddell has received word from the management of the Indiana Reform School for Girls at Clermont that Miss Inez Burk attempted to escape a few days ago and, as a result of her escapade, she is in solitary confinement.

Miss Burk confessed to the killing of her mother, Mrs. Archie McClain, in this city, a few weeks ago. She is sixteen years of age and was sent to the Reform School by Judge Vestal to remain until she is twenty years old.

She was put to work in the laundry, where all new comers are first employed. She became dissatisfied with her employment and also disliked her confinement and confided this information, it is said, to some of her associates. The report finally reached the management and, as a result, she was watched closer than usual, but she succeeded in eluding her superintendent last Friday and got away from the building without being observed. There is no fence around the institution and she made straightaway to a small patch of woods about a mile from the school. She had been gone only about an hour when her absence was discovered and a search instituted for her. The officers of the school found her hiding behind a clump of bushes in the woods and she was taken back to the institution and placed in the room where she can see no one and nobody is permitted to communicate with her. It is said she will be kept there until the authorities are satisfied that she will not attempt to repeat her effort to escape.

[“Inez Burk Attempts to Escape – Noblesville Girl Foiled In Her Effort To Get Away From Reform School. – In Solitary Confinement – Caught in the Woods a Mile from the Institution – Confessed to Murder of Her Mother.” Noblesville Daily Ledger (In.), Aug. 4, 1915, p. 1] 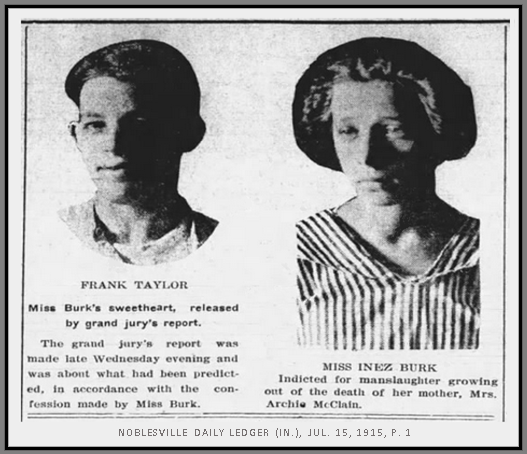 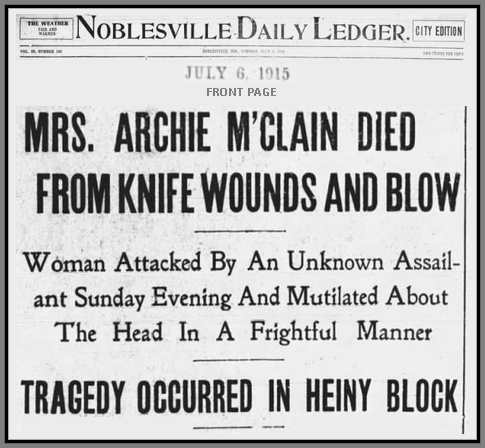