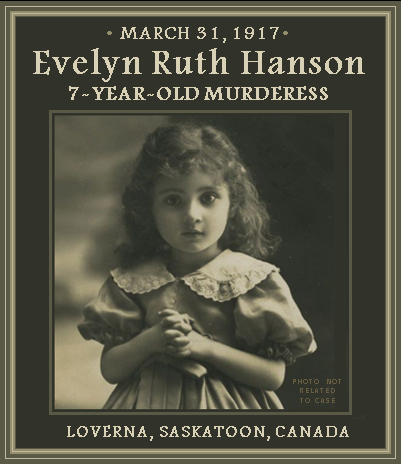 FULL TEXT: After causing death of her four-year-old brother by cruel treatment during fits of morbid jealousy. Evelyn Ruth Hanson, aged seven, daughter of Oswald Hanson, a farmer living eight miles northeast of Loverna, Sask., has become insane and will be handed over to the authorities. According to reports received at provincial police headquarters her last night, the little girl’s mind, at times defective in the past, is now deranged and medical men say she is insane.

Jealous of petting her baby brother, received from its parents, the girl is alleged to have struck the child, trampled on his stomach and beaten him with a shovel. Death followed and the provincial police held an investigation. Coroner Quinn, of Alsask, decided on an inquest and the verdict brought in was:

“We, the jury, find that Glenn Hanson died from strangulated hernia, caused by injuries inflicted by his sister, Evelyn Ruth Hanson.”

On the last day of March, according to evidence given at the inquest, Evelyn threw the baby down and trampled on him. With the assistance of his wife, Mr. Hanson the child into the house, bandaged him and attended to his injuries. Next day the boy was taken to Dr. Fizzeil [?]. of Loverna, who have him further attention. After coming home the boy played a little, but could not keep food in his stomach.

One day later on he fell down and hurt himself. His illness grew. Testimony was given that during the past year the sister had often quarreled with the boy and beaten him, for which she had been spanked and locked alone in a room. But when the opportunity presented itself she would do the same thing again.

At the inquest, Mrs. Hannah Hanson, stepmother of the children, told of having seen Ruth tramp on the boy’s stomach. She had seen her use a shovel with which to beat him. She swore that no one but the seven-year-old girl had ever mistreated the little boy. The girl also abused the other children at times. 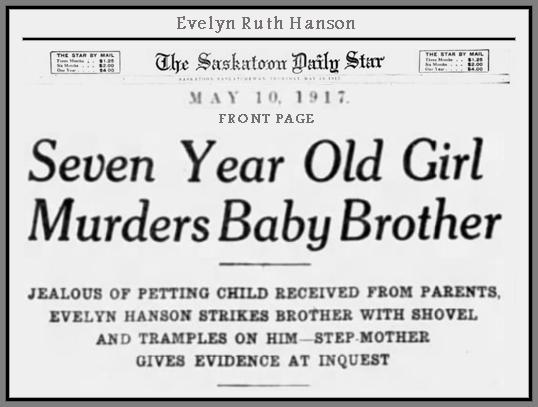