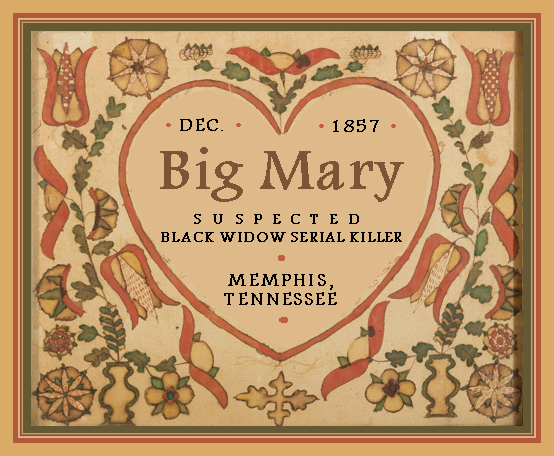 FULL TEXT (Article 1 of 2): An Irishwoman, known as “Big Mary” has been arrested in Mobile, Alabama [sic: error], suspected of having murdered four husbands – the last on the 18th ult. She has been married seven times. Three of her husbands died from natural causes.

FULL TEXT (Article 2 of 2): At the southeast corner of Main and Commerce streets stands a gloomy looking dilapidated house, above the level of the street. Tie front apartment is of the sort of half grocery that is generally denominated a doggery. The rear is used as a boarding house by a number of Irish laborers. The house is kept by a tall stout Irish woman who is known by the name of "Big Mary," the only name for her that we could learn. Big Mary and the purlieus of her gloomy habitation are celebrated in the neighborhood from their connection with their deeds of blood and death, Big Mary, as we are informed by the police, to whom she and her house are well known, is living with her seventh husband. Three of her husbands have met with violent deaths, being killed in or near the "dark house of blood." A son met the same sanguinary fate, also near his mother's gloomy habitation. The other three husbands died of cholera or other diseases. A week ago a nephew of Mary’s, a fine looking young Irishman of twenty-one, came up from Dean's Landing, where he had been working as a laborer, he became boarder with his aunt, in the fatal house so teeming with violence and death to his family.

Last night, soon after dark, just as some dozen boarders had concluded supper, a crush was heard in the grocery, and the upper part oi the door was split and partly forced in. The whole party, with one exception, remained seated, without any curiosity as to the cause of the attack, or any desire to protect the property of their hostess. One man looked out, but he could see nobody, and all concluded that "somebody" had been throwing bricks. Twenty minutes after this, Peter Conmagher, Big Mary's nephew, went out at the side door; he soon came in again, exclaiming: "I am shot;" fell into one of the boarder's arms and instantly died.

Examination showed that a pistol ball had penetrated the right side just below the breast. It had traversed the entire breadth of the chest, and lay under the skin on the left side, rather lower than the point of entrance on the opposite side of the body. On receiving information of the occurrence, officer Cain went to the spot. He found some twenty persons kneeling around the corpse, praying for the soul that had gone where the murderer will have to meet its accusing presence. No further information could be obtained than we have detailed above. Our reporter visited the place at ten o'clock last night, and interrogated the inmates of the "dark house o' blood," but all, men and women alike, professed entire ignorance. They had seen no Hash, did not know in what direction the ball was fired from, could not tell what Peter went out for. In short, they could not, or would not ten anything. 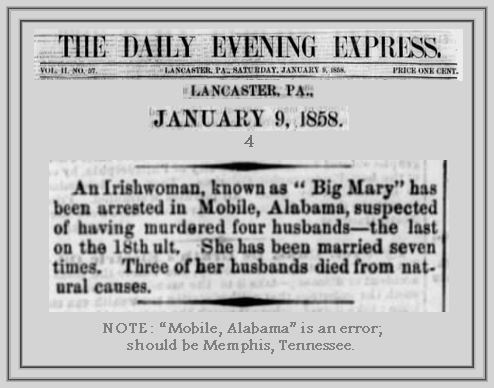