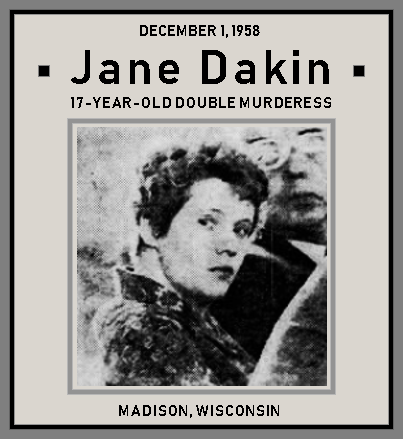 FULL TEXT: Mauston, Wis. – A finance company president and his wife were shot to death in their home last night. Dist. Atty. William Brady said today that their 17-year-old daughter, apprehended in the family car a few hours later, admitted killing her parents.

The bodies of Thomas Dakin, 46, and his 43-year-old wife Betty were found where they were cut down by blasts of pistol fire. They were the parents of two girls, the other 11.

Brady said that Jane Dakin would be taken before Juneau County Juvenile Judge William R. Curran on a delinquency petition. He declined to reveal any details of her statement.

FULL TEXT: Mautson  – A 17-year-old high school girl was quoted by her best friend’s mother today as saying calmly, a few minutes after the crime. “I just shot my mother and my father came home so I had to shoot him too.”

Mrs. Gunnar Johnson, a state witness in the first degree murder trial of Jane Dakin, said that Jane called her out of a 4-H club meeting at the Mauston Court House at about 8 p. m. last Dec. 1 to make the statement.

“She was so calm,” Mrs. Johnson testified.  “I couldn’t believe it. I thought she was crazy. I thought things like that don’t happen. I didn’t realize she had really done it.”

Mrs. Johnson’s 16-year-old daughter, Kathy, also took the stand and described her friendship with Jane/ Pagel testified on finding the bodies at the Dakin home.

Tuesday Jane picked a bouquet of flowers for the sheriff's wife when the jury and principals visited her family home.

Miss Dakin, on trial in Circuit Court on I wo counts of first degree nun der, kept her head bowed low as the tape recorded statement she gave authorities on the night her parents were killed was played for the court. She has pleaded innocent by reason of insanity.

Earlier, as the court visited the Dakin home where the double slaying occurred Dec. 1. Mis Dakin picked a small bouquet for Mrs. Arlene Ripley, who acted as matron during the tour.

Circuit Court Judge Bruce Beilfuss was expected to rule today on whether the tape recording shall be entered as evidence. He permitted the tapes to be played back to the court while the jurors were in their quarters at a hotel on the outskirts of the city.

Miss Dakin said she shot her father, Thomas, 46, and her mother. Elizabeth, 43 about 8 p. m. after watching television. Former Dist.  Atty. William Brady questioned Miss Dakin for four hours on the night of the shooting.

During the questioning, Miss Dakin told of constant bickering between herself and her mother. She said the spats usually concerned her friends, where she spent her time, school work and things she did or didn’t do.

Miss Dakin said that she shot at her mother from the top of the stairway in her home.

Q – What did you do when you stopped watching television.
A—Went upstairs.
Q—What did you go upstairs for.
A—To get the gun.
Q – Why.
A – That’s a silly question.

Miss Dakin refused to answer several other questions but explained her father had taught her to load the weapon, a .22 caliber Winchester. She said she filled the magazine.

A – She ran upstairs and I went into Mary’s room and then I shot her when she reached the top of the stairs. She fell down the stairs and I was getting ready to leave when dad came in.

Q – Did he say anything to you.
A – No. I just started shooting.

The father died of two bullet wounds, his wife had been shot seven times. Miss Dakin’s sister, Mary, 11, was at a movie at the time of the shootings.

The statement continued with Miss Dakin relating how she asked a family friend to care for Mary, then drove out of town contemplating suicide. She changed her mind and called authorities.

Miss Dakin seemed wistful as she walked through the empty rooms of the family home. She took a few books left on a living room shelf and several phonograph records from the kitchen, handed them to Mrs. Ripley and left. Outside, she walked around the house picking flowers and waved to a neighbor boy when he called to her before the group returned to their automobiles and drove back to the court room.

FULL TEXT: Mautson – Seventeen-year-old Jane Dakin, on trial for slaying her parents, testified Thursday that five or six years ago she killed two baby rabbits by burying them alive because voices told her, "They're dumb things they won't live anyway.

The same voices, she told a Circuit Court jury of 11 men and one woman, kept telling her, "You’re crazy, you're crazy when she shot her mother death last Dec. 1.

Miss Dakin is on trial for first degree murder for killing her mother Elizabeth, 43, and her father, Thomas. 46, in the family home here. She has pleaded in nocent by reason of insanity.

She testified that she and her mother talked of Christmas presents the night of Dec. 1 before she went upstairs and loaded an automatic .22 caliber rifle.

After shooting her mother, she said, "It wasn't like I was doing bad. I was just shooting and then I heard the voices again telling me, 'You're crazy.' "

When her father entered the house shortly after the mother had been shot, she said, "1 felt like saying 'look, Dad, I'm crazy, I just shot mother'." Instead she shot and killed her father.

There was no cross examination of Miss Dakin.

Jane Dakin followed her 11-year-old sister Mary on the stand. Jane kissed Mary on the forehead after the younger girl testified that on the last night she saw her parents and Jane together “we were talking about Christmas presents – about what I’d like and what Jane would like.”

Mary was at a movie at the time her parents were slain.

When Defense Attorney Arlo McKinnon asked Mary if “everything was happy and all right with you, your mother and Jane,” the girl replied “as far as I can remember, everything was normal.”

The state rested its case after playing a four-hour tape recording made by Jane to county authorities a few hours after her parents were slain. In it she described in details of the shooting and events that led up to it.

Dr. Vernon M. Griffin, one of the first defense witnesses to be called, testified that Jane “was mentally disturbed and in need of psychiatric care.” He was the Dakin family physician.

Another defense witness, Mrs. Louise Hale, practical nurse who said she had known the Dakin family for 20 years thought Jane was “insane at times.”

"She was sane at the time the act was committed," Dr. Weber testified, "and she is sane now. She knew right from wrong and was aware of the nature and quality of her acts."

Dr. Weber’s testimony directly contradicted by a number of defense psychiatrists who said they believed the girl to be insane during the slayings.

Miss Dakin, a 17-year-old high school student, has admitted the automatic rifle slayings of her father, Thomas, 46, and her mother, Elizabeth, 43, the night of Dec. 1. She has pleaded innocent by reason of insanity to two counts of first degree murder at her Circuit Court trial before Judge Bruce Bellfuss.

Dr. Weber said that his opinion as to Miss Dakin being mentally ill would have to be negative. He said this was based on examinations of Miss Dakin and observing her actions on many occasions.

She was able to participate in group activity Nov. 30 by attending a movie with others, Dr. Weber said, in addition to roller skating and driving an automobile.

He said that on Dec. 1 her actions were also normal, that she was able to eat her meals, answer the door when visitors called and complete the rather complicated process of loading the rifle though she had only done it once before.

Dr. Weber also said that after the shootings Miss Dakin's action were rational in that she could drive an automobile.

"These acts required coordinated movements," Dr. Weber said, "and were not the nets of an insane person."

He added that he did not believe her statements of attempted suicides were genuine but were attempts to gain sympathy.

"Desire for Immediate gratification in this girl was immense," Dr. Weber said. "She has always wanted things when she wanted them—right away."

Authorities found the bodies of her parents in the living room of the Dakin home after they were called and told of the crime by Miss Dakin. Both husband and wife died of multiple bullet wounds.

FULL TEXT: MAUSTON, Wis. – A jury decided last night that attractive 17-year-old Jane Dakin, who likes to read Shakespeare and play the piano, was insane at the time she killed her wealthy parents.

The circuit court jury of 11 men and one woman, after deliberating three hours, found that Miss Dakin was innocent on two counts of first degree murder, because she was insane at the tame of the act, the plea she entered for her trial.

The girl admitted shooting her mother, Elizabeth, 43, and then her father, Thomas, 46, with an automatic .22 caliber rifle the night of Dec. 1. Seventeen shots were fired from the gun, most of them striking the parents. Afterward she went to a friend's home and told of the double slaying.

She testified at her trial that she had discussed Hamlet and other works of Shakespeare her mother shortly before she shot her to death in their home here. She killed her father when he entered the home a short time later, she said.

Miss Dakin, who maintained remarkable composure during her 15-day trial, wept on the shoulder of her uncle, Phillip Dakin of Milwaukee, when the verdict was read to Judge Bruce Beilfuss.

Judge Beilfuss remanded the girl to the custody of the Juneau County sheriff and said he would confer with public welfare officials before deciding whether the girl should be sent to an institution for a determination of her sanity now and whether she should have psychiatric treatment.

The statute under which the girl was found innocent empowers the judge to have her committed for further treatment until she is cured to the point where there is reasonable certainty she would not again commit such an act.

The Wisconsin Diagnostic Center at Madison, which examined Miss Dakin for 60 days after the shooting, said the girl was mentally ill. It indicated that she could eventually be restored. If that happens she would be free, under Wisconsin law.

Judge Beilfuss gave the jury three alternatives. It could have found Miss Dakin guilty of first degree murder, punishable by life imprisonment; innocent by reason of insanity at the time of the act or acquittal.

Testimony at the trial, and from a tape recorded interview with the | girl admitted as evidence, disclosed she had planned to kill herself but instead shot her mother. The tape recording also quoted Miss Dakin as saying she "heard voices" telling her that she was crazy and that at another time the same voices told her to bury two rabbits alive because "they couldn't live anyway." 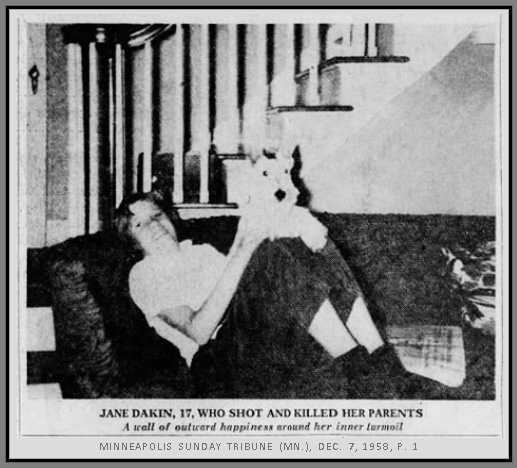 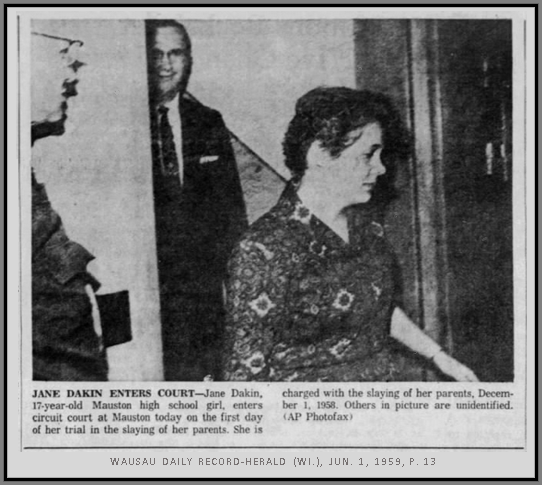 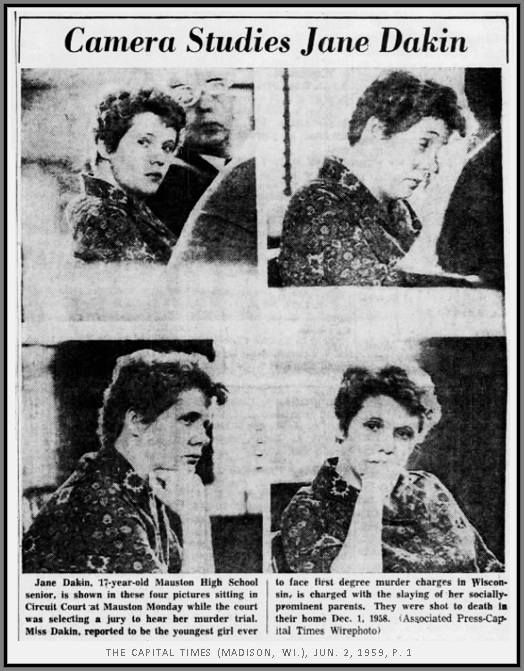 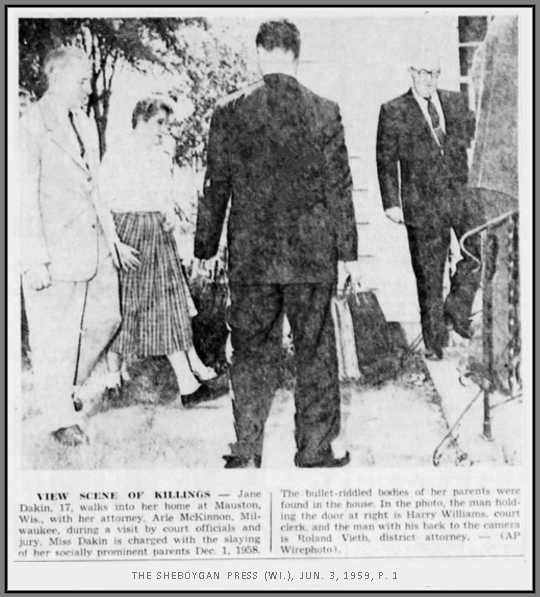 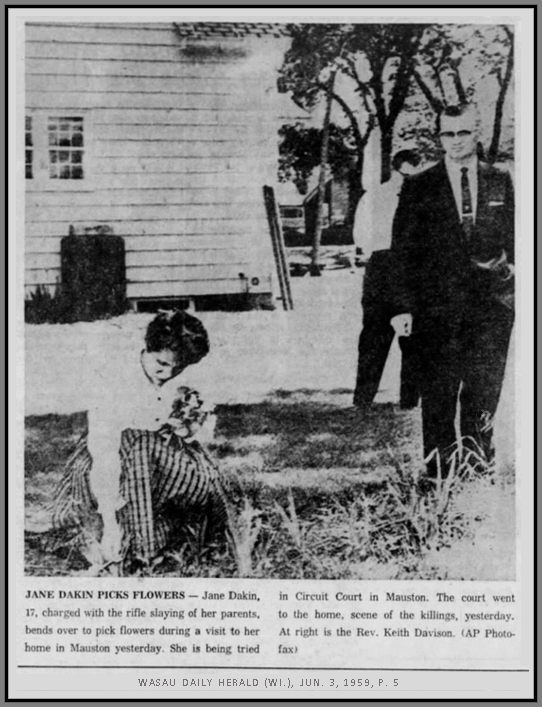 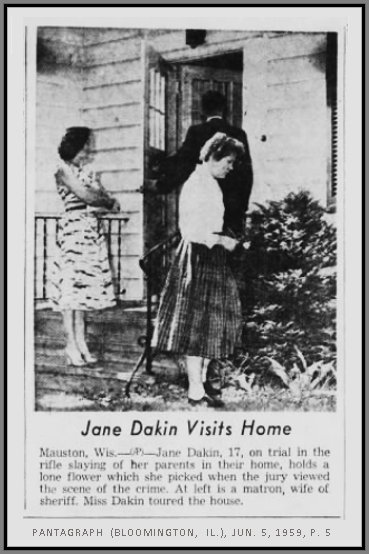 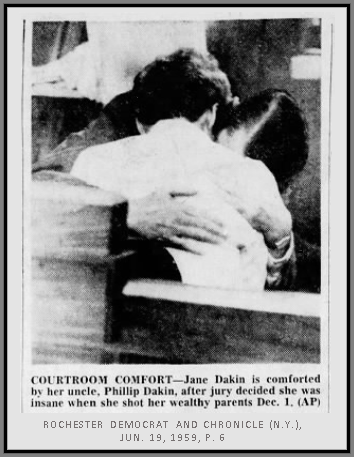 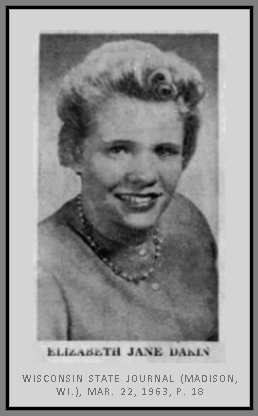