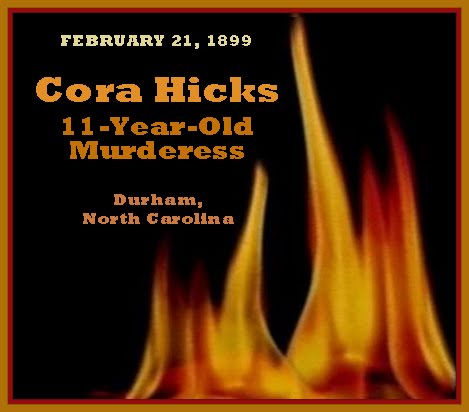 FULL TEXT: Durham, Reb. 21. – Cora Hicks, a negro girl about 13 years old, is in jail upon the charge of committing a most inhuman crime. The charge against her is that she threw a colored child she was nursing into the fire. It was burned badly before another member of the family snatched it from the flames. It seems that she was nursing the child of Justina Justice, who works away from home, and because the little one was fretful she proceeded to punish it as stated.

FULL TEXT: Today Mary Hicks, colored, mother of Cora Hicks, the girl murderer, was arrested upon the charge of being an accessory to the crime. While the mother did not actually assist in the crime, evidence has been brought to light to show that she tried to conceal the crime after it was committed, and even went so far as to threaten to cut her daughter’s throat if she ever told anything about who placed the child in the fire or how it was burned. She will be held for the grand jury.

***
FULL TEXT: Cora Hicks, the colored girl, who pat a child of Justina Justice, colored, into a blazing fire a short time since, has been committed to jail to answer to the charge of murdering the child. Although the child was very badly burned, it lingered until last night, when it passed away.

As our readers will remember, the girl became offended at the child from some cause and grabbing hold of it sat it down on the fire.

It was fiendish and atrocious act, one that will place her neck in jeopardy. Even if she does not suffer death for it, it will in all probability be a close call.

There are some people in this world too mean to live, and this Hicks girl is one of them. All the evidence in the matter points strongly to the fact that it was her determination when she put the child into the fire to injure it badly if not causing it to be burned to death outright.

Coroner J. Maddry began an inquest over the remains of the dead body of the child at 3 o’clock this afternoon, to determine whether the injuries received caused death. We go to press too soon to give the verdict of the coroner’s jury.

***
FULL TEXT: When the Sun went to press Wednesday afternoon the Coroner’s inquest was being held over the dead body of Anabel Justice, the colored child whose death was caused by Cora Hicks, a colored girl, the circumstances of which have already been related through these columns.

Agnes Leathers testified that she did not know anything about the burning only what her child, Sallie Leathers, told her. That was the same statement just made by her to the jury.

Sallie Leathers testified that Cora Hicks took Anabel Justice and set it on some hot ashes. The child screamed and cried while on the ashes. Witness jerked her out. The child died yesterday. Cora was asked by witness what she burnt the child for and she replied “I don’t care.” She held the child by the legs and had its head between her (Cora’s) legs. On cross examination Sallie said that after the child was burned Cora put soda on the place.

Dr. S. L. Warren’s evidence was as follows: I saw the child (Anabel Justice) several days after she was burned. The burn was on the left hip and aide. It was a bad burn. I think the burning was the cause of the child’s death. That is, I believe the burning was either the cause of the child’s death or brought on complications that caused her death. I am a practicing physician in this (Durham) county. The child was burned on February 11th and died March 7th, 1899.

Nat Morton testified that he heard Mary Jack, alias Mary Hicks, mother of Cora Hicks, say that if “my child did set Anabel Justice in the hot ashes she should never tell it, and would cut her G d throat before she would let her go to the court house.” This was several days after the burning.

Alex Harris’ testimony was as follows: I heard Mary Hicks say, after the child was burned, that she would cut her daughter’s throat from ear to ear before she should tell how it was burned. After the hearing of the testimony, the coroner’s jury rendered their verdict as follows:

“Be it remembered that on the 8th day of March, 1899, J. Frank Maddry, Acting Coroner of said county, attended by a jury of good and lawful men, viz., T. Lea, Walter Hicks C. W. Barbee, W. A. Hewitt, L. W. Leigh and J. L. Clark, by me summoned for the purpose, according to law, and after being by me duly sworn and empanneled, at Durham, in Durham township, Durham county, did hold an inquest over the dead body of Anabel Justice, daughter of Justina Justice and after inquiring into the facts and circumstances of the death of the deceased, from a view of the corpse, and of all the testimony to be procured, the jury finds as  follows:

“We the jury, find that the de. ceased, Anabel Justice, came to her death from the effects of burns, inflicted by Cora Hicks. We recommend that the said Cora Hicks be committed to jail without bail, to await the action of the grand jury,”

Mary Hicks, the mother of Cora Hicks, was re-arrested today as accessory to the murder of Anabel Justice, and. was locked up in jail.