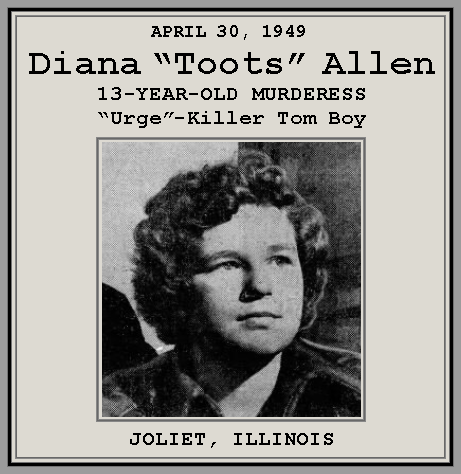 She could give no motive for her act. She said an urge to kill the boy struck her while they were picking flowers. Before drowning him, she said, she tied her scarf over his mouth.

Later, she aided Charles’ parents, Mr. and Mrs. Eric Johnson, and neighbors, in an all night search for the lad, and the next day, after his body was found in the creek, she took up a collection to buy flowers for the funeral.

She was questioned, together with other playmates of the dead boy, but denied knowledge of his death. Tuesday, the Allen family moved from their former house at707 Blackhawk st., Joliet, near the Johnson home, to 8641 Roberts rd., Oak Lawn, where Diane’s father, Clarence, opened a snack bar.

It was not until yesterday afternoon that Deputy Sheriff Roy Doerfler of Will county obtained an admission from Diane. He visited the Allens’ new home in Oak Lawn for a routine recheck, and questioned Diane in the presence of her parents. Stolidly, she repeated her denials.

She admitted that she was with Charles and another neighbor boy, James Parsons, 4, of 715 Osage st., Saturday afternoon picking flowers, but insisted that Charles had left them to return home.

She was unable to explain why, in that event, he had not taken his new bicycle from the yard of another neighbor between the creek and his home. When Doerfler rose to leave, he said:

“Now, Diane, I am going back to Joliet and I hope you have been telling me the truth. Of course, we are going to continue investigations, and if I come back to see you again, it will be to take you to Joliet.”

Tears appeared momentarily in her eyes, but in the state’s attorney’s office, where she later gave her statement to Doerfler and James Clark, a special investigator, her composure returned.

She said she left after 1 p. m. Saturday to pick flowers, taking the Parsons boy with her. On the way, they met the Johnson boy and invited him to go along. He did so, leaving his bicycle is the yard of Diane’s grandmother, where it later was found.

“We picked flowers for a while, and then sat beside the stream,” Diane said. The stream is at the foot of Osage st., about 700 yards from the Johnson home.

“I told the Parsons boy to go and get his sister and some playmates and he left,” Diane went on.

“Then I Took off my scarf and tied it around Charles’ mouth, and then untied it again.

“Then I grabbed him by the arms, just below the shoulders, from behind. He struggled, but I got into the creek and pressed him down into the water. He screamed once, but then his whole head was under water. Pretty soon he stopped struggling. I held him there about two minutes, and then I let him go.

“He rolled sort of to one side, and I waded out of the stream and ran back to Osage st., where I met the Parsons boy and some other children on their way to the stream. I suggested we should go play near my house.

“Where’s Charles?” the Parsons boy asked. I told him Charles had gone home.”

She told of joining in the search which started when Charles failed to return home for supper, and of sitting in the Johnson home until 2 a. m., reading comic books.

The fact that Charles was missing had been kept from a younger sister, Judy, 5. When her parents returned to the home during the search, they told Judy they had gone to buy Charles a bed.

Doerfler later was informed by Johnson that Judy replied:

“But Charles doesn’t need a bed.”

When they asked her why, the child replied “Because he’s drowned.”

“Who told you?” Judy was asked.

“Toots,” said Judy, “He was drowned when you were calling him for supper.”

Mr. and Mrs. Johnson yesterday expressed sympathy for Diane’s parents, but they said they felt that the girl should be punished.

Denied that there was any sex motive in the crime.

“Did you take him down to the creek to drown him?” she was asked.

“Well, I wanted to, but I didn’t know whether I would be able to. The idea struck me while we were in the field picking flowers.”

“Are you sorry you drowned Charles?”

“Yes, I was sorry when I was doung it, but I was afraid if I let him go he would go home and tell his folks.”

~ Inquest To Be Reopened ~

Coroner Willard Blood of Will county said last night last he will reopen the inquest into the Johnson boy’s death today. At a preliminary hearing Tuesday, a coroner’s jury found that the boy died of drowning, but was unable to determine whether the death was accidental, or a homicide.

Diane was a student at the A. O. Marshall grade school in Joliet. Teachers said that while she made passing marks, she was only an average student. Doerfler said Diane’s parents told him she had run away from home several times, once being picked up in Chicago and held in the Juvenile detention home. She has a younger sister, Shirley, 12.

FULL TEXT: Diana (Toots) Allen, 13, found not guilty by reason of insanity in Joliet yesterday on a charge of murdering her playmate, Charles Johnson, 7, and then ordered committed to the Elgin state hospital, made an unsuccessful attempt to escape as she was being led across the street from the Will county court house to the county jail after the verdict was pronounced.

The girl slayer, who had confessed drowning the boy last April 30 in a shallow creek near his home at 707 Osage st., Joliet, broke away from Mrs. Elizabeth Sable, special matron assigned to care for her.

Deputy Sherif [sic] Roy Doerfler caught her after a short chase down the street. As she struggled to free herself from his grasp, she told Doerfler: “let me alone. Keep your dirty hands off me. I don’t want to go back to jail.”

Three hours later Diana was admitted to the Elgin hospital. Dr. Daniel Haffron, assistant superintendent, said she would be sent to the woman’s diagnostic center for examination and study before a plan of treatment is decided upon.

The verdict was returned by a jury of nine women and three men in Will county Circuit court after John Irving Pearce, state’s attorney, and the defense lawyers, James W. Faulkner and Francis A. Dunn, joined in recommending is to the promptly ordered her committed to the hospital until she is pronounced  fully permanently cured.

The jury deliberated 2 ½ hours. The foreman, Frank J. Ambrose, 511 N. Buff st., Joliet, said out of court the delay resulted because one juror, Donald O. Ferguson of route 1, Joliet, insisted that Diana should be sent to prison.

After the verdict was read Mrs. Rosella Johnson, mother of the slain boy, shouted, “So she’s going to get a second chance,” and then buried her face in her hands and wept. Diana, who lived at 8641 Roberts rd., Oak Lawn, greeted the verdict without emotion. A boyish appearing and pale child, Diana had displayed virtually no emotion thru the four day trial except when she burst into tears and wept several minutes shortly after the case went to the jury.

Three psychiatrists testified during the trial  that Diana is a victim of schizophrenia (split personality). Dr. Sophie Schroeder Sloman, superintendent of the Illinois institute for Juvenile Research in Chicago, a court witness and last of the psychiatrists to testify, said in response to a question, “I’m afraid she will get progressively worse.”

Judge Bentley, over protests of defense counsel, had admitted her signed confession as evidence early in the trial.

FULL TEXT: Diana Allen, 21, slayer of a 7 year old boy in 1949, who was found not guilty of murder because of insanity, yesterday was sentenced to 20 years in the Illinois women’s reformatory at Dwight for robbery.

Herbert Wetzel, her attorney, pleaded for probation, but was refused by Judge James V. Bartley in Will county Circuit court, Joliet, who imposed the sentence. He said he believed the prison term would best serve the needs of society.

Miss Allen spent seven years in the state hospital for the murder of Charles Johnson, 7, on April 30, 1949. She held him under water and drowned him in a shallow creek near his home, 707 Osage st., Joliet. 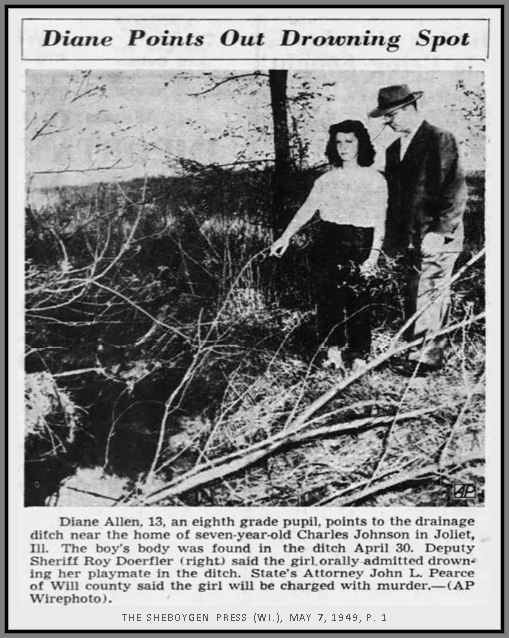 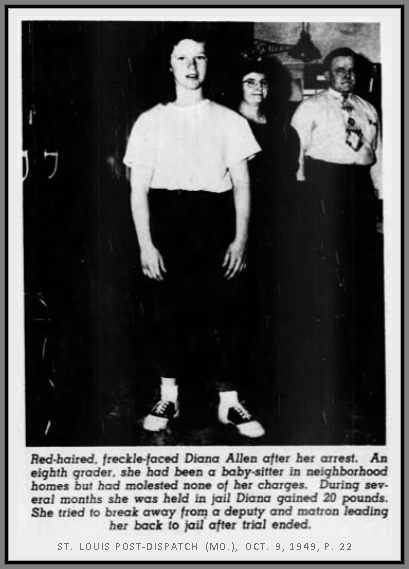 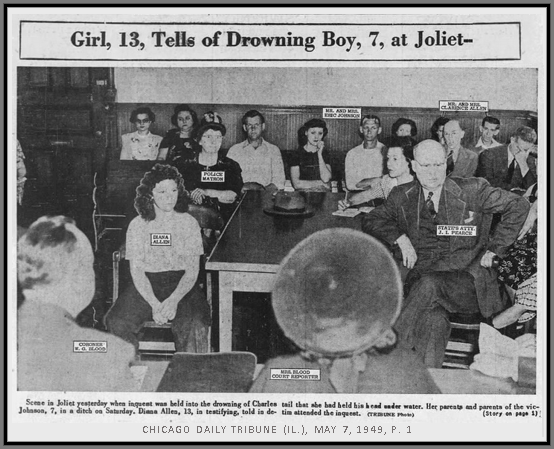 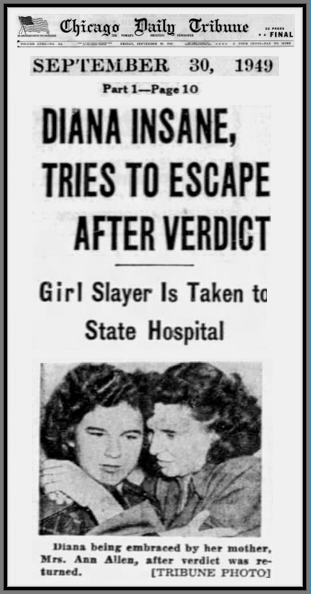 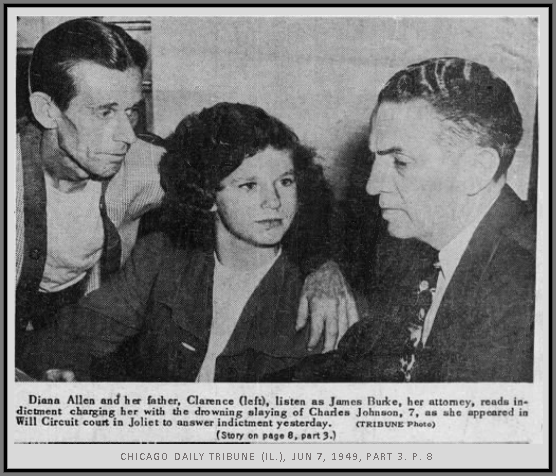 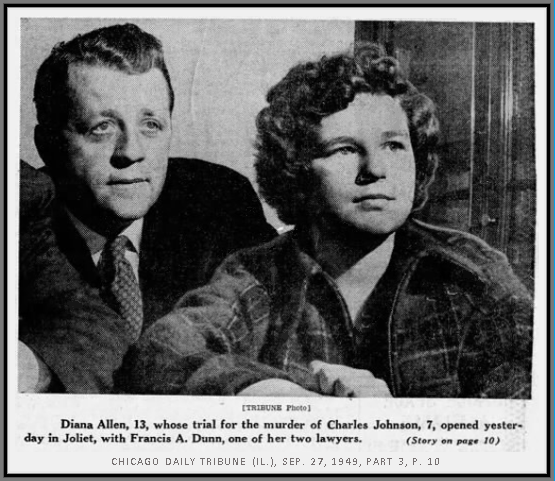