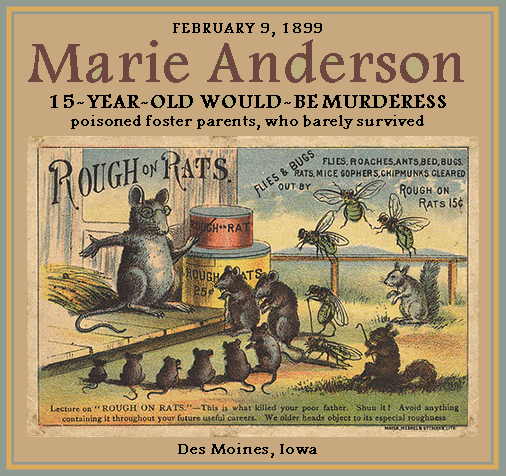 FULL TEXT: Marie Anderson, the 15-year-old adopted daughter of Dr. and Mrs. Albert Anderson, of this city, has confessed that she put poison in the coffee of her parents a week ago, with the intention of killing them. Mrs. Anderson is at the point of death, but the doctor has recovered. The girl is in the custody of the officers.

In her confession she says she is the daughter of a family named Obrey, and was adopted in September, 1892. She and her adopted mother never got along well together, and she frequently left home on account of their quarrels. Her adopted father loved her. On the morning of Feb. 9, she cooked pancakes and her mother scolded her. Her mother had told her not to do it, but the doctor wanted pancakes, so she cooked therm. On account of the scolding she procured the rough on rats and put it in the coffee pot after breakfast. She said the grounds would not be thrown out, and she knew the noon coffee would be made in the same pot. The poison she had found six months before, and had preserved it on a shelf in the cupboard.

[“Marie Anderson Confesses to the Crime of Poisoning Her Parents by Placing Rough on Rats in Their Coffee.” The Weekly Foreign Vindicator (Des Moines, Io.), Mar. 2, 1899, p. 2]

FULL TEXT: Marie Anderson, or Blanche Obsey, has confessed to putting poison in the coffee which Dr. and Mrs. A. A. Anderson, of Des Moines, drank on February 9, and which came near killing them. The girl says that she put some powder that she found in a box- in a dresser into the coffee pot on the afternoon of February 9.

She then went to Mrs. Prewitt's, near by, throwing the box away. Mrs. Anderson is still very ill from the effects of the poison, which has been found to be rough on rats. Dr. Anderson is about fully recovered. The girl states that she was adopted by them in 1892, but she never liked Mrs. Anderson, and that on the morning of February 9 that lady scolded her for not making pancakes for breakfast, and that scolding determined her to poison her foster mother. She stated that several times she thought of taking poison hex-self. Judge Holmes has sentenced the girl to the girls' reform school at Mitchellville.