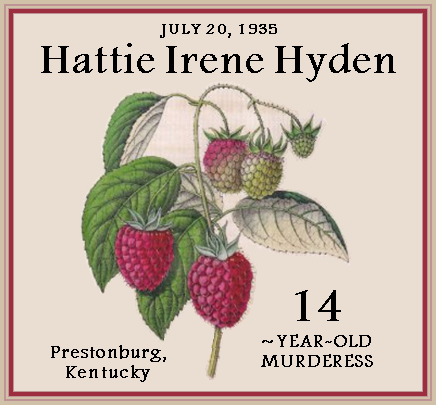 Officers said the girl, apparently crazed by the sun beating down on the mountainside, slashed his throat with a butcher knife with which she had been whacking at the undergrowth as they climbed the mountain.

Described as pretty, the girl was held in jail awaiting trial In Juvenile Court here next Thursday on a murder charge. If convicted she would face sentence to a State reform school for girls. The body was found by the father,

M. Hyden, a coal miner at Weeksbury, In the undergrowth at Caleb Fork. Officers said the girl at first maintained she knew nothing of the tragedy, but that later confessed she cut her brother's throat in a "mad fit."

Officers said she gave this explanation: "He was dragging along behind as we climbed the hill, and it was so hot I could hardly stand It. I flew into a mad fit and cut his throat."

Deputy Sheriff Willie Johnson said he found a blood-stained dress Inside a bundle of clean clothes at the Hyden home. The dress, he said, was worn by the girl when she and her brother left home together.

The girl’s parents were said to have been separated since she was eight months old. The mother was said to live in Ohio.

Mrs. Emma Hunt Krazeise, director of the Kentucky children’s bureau, announced at Louisville she would go to the trial “to look after the interests of the girl.”