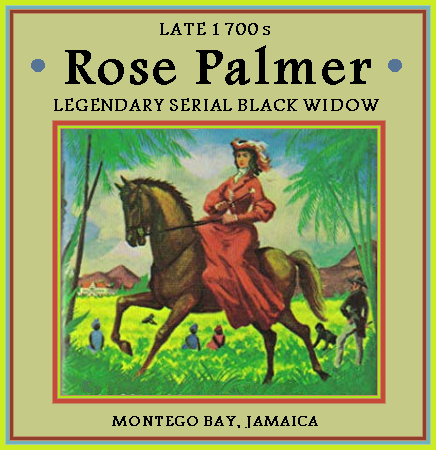 The name of Annie Palmer may have become confused with Rosa Palmer, the original mistress of Rose Hall who did have four husbands but was said to be unwaveringly virtuous.

FULL TEXT: Montego Bay – The old Church of St. James stands on high ground above canalized Montego River, a few blocks inland from the busy Town Square and it stands there looking as if it were some village church In England, though of course the tall royal palms in its yard do blur the Old Country illusion.

As I approached the main door a man walked slowly towards me.

"You want to get inside?" said he, as if the door weren't wide open.

"Why, yes," I said, walking in, and he with me. It is a grand old building, in which a first service was held on Christmas Day, 1782, as a posted notice tells.

It is a grand old building, in which a first service was held on Christmas Day, 1782, as a posted notice tells.

It is in the form of a Greek cross, end as I stood in the middle of It. looking around for one particular memorial, my hitherto silent attendant said "the Palmer statue Is over there."

He wasn't clairvoyant. It was Just that probably everyone who comes wants to see the monument so Mrs. Rosa Palmer, once identified as the White Witch or Obeah woman. Guides used to tell (some perhaps still do) the story of this Mistress of Rose Hall, and how

She kill tree husbins
An' the fort kill she.

The memorial, which Is in the left front corner, is a magnificent marble from the hand of John Bacon, R. A., one of the notable London sculptors of the 1700's. Done in 1794, it shows a beautiful young woman laying a floral garland upon an urn bearing a low-relief portrait of an older woman, who is doubtless Mrs. Palmer.

And the inscription tells that it was erected by Hon. John Palmer in memory of his beloved wife, a lady of "open, cheerful and agreeable disposition" Which are odd qualities for a witch.

She wasn't one, of course. Yet guides have been known to point to a stain on the neck of the young woman laying the floral tribute, and tell that it appeared there in some mysterious way "because she was strangled by her husband."

The grim, confused story of the White Witch provides a study in the development of folk-lore.

Rose Hall I had visited.

While I was still at the Half Moon hotel, nine miles east of town on the North Shore road, I learned that it stood on part of the old plantation grounds. Then Bill Thompson, the Montego representative of Colombian National Airways, whom I'd met when I stepped off the plane from New York, phoned to say that he had a spare hour.

Shortly we were traveling through fields of tall sugar-cane, and in a mile or so not far, anyway I saw the tall chimney of what turned out to be the Rose Hall sugar-works.

We turned in through the factory gate, stopped at the office for a moment "It's all right," a, man aid, "but I wouldn't go into the hall; it's too dangerous" and then we were going straight back through the fields to where the ruin of the wonderful old stone Great House stands on a hillside . . . Its roof caved in, its windows gaping; a dramatic, and, yet beautiful thing even with the horror of decay and vandalism upon it. Marbles from Italy, the richest of woods had been used in building it.

The plantation road swung around and climbed the rise at the left of the hall. And where a gate barred further driving we found three or four young men waiting to lead us on.

Now the language spoken today by the Jamaican masses is English with various trimmings from other sources. A shift of ac-CENT alone will baffle the stranger. Mosquito is MOSSkito, for instance. Poor enunciation completes the confusion.

So though our guide did his earnest best, I can report only that he said something about Rose Hall having been the home of "a very wee-ked woman called White Witch . . . and she had plenty slaves up here. She keel tree bus- bins and" then I lost It. "

'Was strangled by the fourth,' " said Thompson, interpreting.

By then we had got up to the hall, and had mounted the great double stair that now leads up into only thin air. There is a gap between it and the door. But I could see enough of the ghost-filled wreck to appreciate what must have been its palatial grandeur.

And there ARE ghosts or were one ghost, anyway. Some of the countryfolk were so certain that the wraith of the White Witch used to appear in the place that a lady-exorcist came two or three years ago and drove her out.

From the hall's height we looked down over the plantation fields, and to the open Caribbean beyond them.

"She was buried over there," said the guide, pointing to a spot over on the hillside, where there's a tomb.

A clump of coconut palms is in the canefleld, close to the highway.

"But there are four trees I Said. "She killed three. . . ." He had no solution to that problem.

We walked around to the side of the hall, and looked into the basement to see the cells in which the Mistress of Rose Hall used to imprison slaves who displeased her and from which their anguished cries when undergoing torment used to reach down into the slaves-cabins end chill the hearts of the poor blacks.

Death was in her look, they said. She was an obeah-woman who knew  the magic of Africa, and could make a death-producing charm. But above all she was unspeakably cruel.

She charged a young house-slave named Princess with having tried to poison her; and when the girl was convicted and hanged here in Montego Town, Mrs. Palmer had her head carried to Rose Hall and put up on a pole as a warning to the others.

The tale gets confused ... but in the end either a slave who had been her lover strangled her; or when a lad attacked her, other slaves Joined him and smothered her under a mattress.

So runs the story which you'll find novelised in "The White Witch of Rosehall," which has gone into many editions.

Now though this is folk-tale it deals with persons and happenings of only 125 years ago, and so must have some sound basis. Yet the "open, cheerful, and agreeable" lady of this monument in St. James Church seems to have been drawn into it through a confusion of identities. She did live at Rose Hall. She did have four husbands.

But there were two Mrs. Palmers ana two John Palmers at Rose Hall . . . and Rosa Palmer was dead probably before the While Witch was born.

In six months he was dead; and, to be brief, there followed him in succession George Ash, who built Rose Hall, Hon. Norwood Witter, and finally John Palmer, a widower with whom Rosa lived happily until her own death In 1790.

Jump now to 1819, when Palmer's grandnephew, John Rota Palmer comes from England to take residence, and in the next year marries Annie Mary Patterson. He died in 1826. but she lived on to became the mad mistress of the plantation, and to die somehow in 1833.

It Is easy to see how the tradition of the three murdered husbands could have developed, for there must have been talk among the slaves of Rosa Palmer's day. Then came the cruel Anna Palmer . . . and the two women became one.

Where the "agreeable" lady's husbands are buried I've never heard. Perhaps it is they who rest near the coconut trees that nearly every Jamaica visitor passes in the course of island sightseeing.

Wikipedia: The White Witch is a legendary story of a haunting in Jamaica. According to the legend, the spirit of "Annie Palmer" haunts the grounds of Rose Hall, Montego Bay. Despite many years of speculation, modern scholarship has shown the story to be untrue.

According to the legend, the spirit of "Annie Palmer" haunts the grounds of Rose Hall Plantation near Montego Bay. The story states that she was born in Haiti to an English mother and Irish father and spent most of her life in Haiti. When her parents died of yellow fever, she was adopted by a nanny who taught her witchcraft and voodoo. She moved to Jamaica and married John Palmer, owner of Rose Hall Plantation. Annie murdered Palmer along with two subsequent husbands and numerous male plantation slaves, later being murdered herself by a slave named "Takoo". A song about the legend called "The Ballad of Annee Palmer" was recorded by Johnny Cash.  For many years Cash owned the nearby Cinnamon Hill Great House.

~ Investigations of the legend ~

Geoffrey S. Yates, Assistant Archivist, Jamaica Archives, claimed that the story started with an account by Rev. Hope Masterton Waddell of the strangling of Mrs. Palmer at the adjacent Palmyra Estate in 1830. However the passage in Waddell's memoirs simply includes a footnote claiming that "The estate furnished scenes and characters for Dr. Moore's novel Zeluco. The cellars and spikes used by a lady owner therefor the necks of her slaves I have seen, and also the bed on which she was found dead one morning, having been strangled." However whilst the novel has an anti-slavery theme, the only scenes set in the Caribbean are located in Cuba and feature none of the details claimed by Waddell. Waddell, himself an abolitionist, was also writing in the context of the Baptist War of which Waddell was a first-hand witness. He stated that the Palmyra Estate was set on fire alongside the Kensington Estate, located further in land as a signal for a general insurrection.

The legend was elaborated by the journalist John Castello in 1868. Castello was the owner of the local Falmouth Post when he published a small pamphlet Legend of Rose Hall where he erroneously describes a memorial in St. James church to "Anne Palmer".

An investigation of the legend in 2007 by Benjamin Radford concluded that the story was fictionalized, modeled on the title character in a famous Jamaican novel, The White Witch of Rosehall by Herbert G. de Lisser, published in 1929. An Annie Palmer unrelated to Rose Hall did exist, and by all accounts had no tendencies toward sadism or lechery. Rough Guide To Jamaica author Polly Thomas writes that the name of Annie Palmer may have become confused with Rosa Palmer, the original mistress of Rose Hall who did have four husbands but was said to be unwaveringly virtuous. 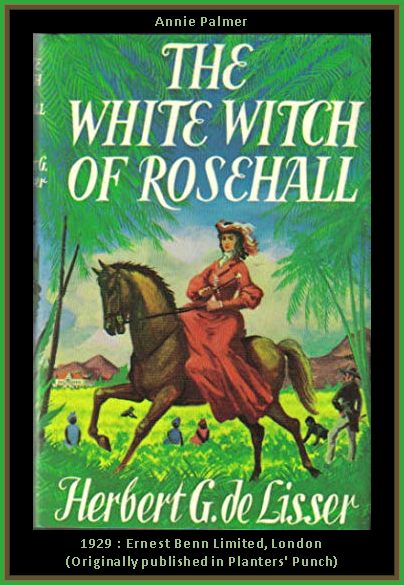