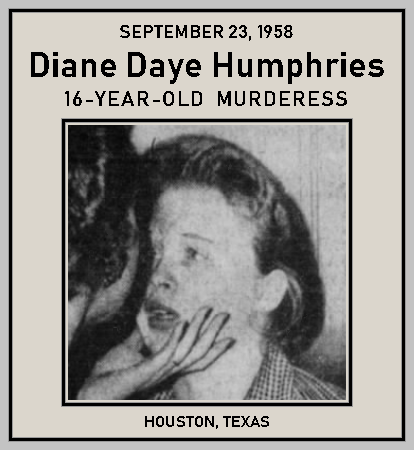 FULL TEXT: Houston, Tex. – The routine of everyday living closed in on Diana Daye Humphries yesterday and to escape the boredom she ambushed and killed her 14 year old brother, Robert D. Humphries, Jr., “I did it because everything was so routine,” said Diana. “My mother goes to work every day and comes home tired. So does my father and he is sick with ulcers.

“Everyone was always tired. Robert was tired of school. It seemed we were always getting up, going to work or school, coming home, cooking meats, eating, washing dishes, going to bed and getting it up again.

“I couldn’t stand it! I wanted to kill everyone quick so we wouldn’t have to suffer any more.”

The police said Robert did not suffer. He was shot through the forehead with an ancient .22 caliber rifle as he walked into the den of the Humphries home.

His sister said she stood over him and delivered a coup de grace shot in the back of the head.

“I didn’t want him to suffer,” she said.

Diana is an honor student at Reagan High School, where her teachers and schoolmates described her as a “brilliant student and well liked girl, not the type to do a thing like this.”

In her written statement to the police, Diana detailed how she stayed home from school yesterday, “because of an upset stomach,” and then conceived the plan.

She said she prepared carefully. She went to the garage and got the old rifle, handed down by her grandfather, and then found the bolt where her father had hidden it, she said her father, a retired chief Navy yeoman who now works for a manufacturing company, hid the bolt to keep Robert from hurting himself.”

She assembled the gun, and went to a neighborhood store and' bought a box of cartridges.

“I fired a test shot into my mattress to make sure the gun worked,” she said.

Then she sat down to watch television in the den and waited.

“I jumped up and got in back of the television set and raised the gun, aiming at the place in the door through which I knew he would walk,” said Diana.

“I didn’t want him to know it was me who shot him. I wanted to hit him quick, so he wouldn’t hurt.”

Diana reloaded and shot him again. She covered him with blanket and. then stationed herself to. await her mother.

Mrs. Humphries, a 34-year-old reservations clerk for Braniff International Airways, came up; the walk, outside.

"I saw then that there was no way that I could shoot mother without her seeing me," the girl sobbed. "I didn't want her to see me shoot her, so I told her to stay outside."

Mrs. Humphries said as she reached the door, she heard Diana laughing.

“But when I placed my hand on the doorknob,” she said. “I knew she wasn’t laughing but crying hysterically. She told me not to come in, that she had shot Robert and was going to shoot me.

"I walked in and took the rifle away from her. I thought she was joking. They're always playing jokes." The girl was turned over to probation officials today.

Paul Irick, head of the probation department, said Diana would be given a psychiatric examination.

FULL TEXT: Houston – A 16-year-old girl who killed her brother because nothing exciting happened around their Houston home was committed to a state hospital Thursday for an indefinite period.

The new commitment order was not contested.

Robert D. Humphries Jr., 14, was shot to death Sept. 10 as he arrived home from school.

Diana told investigators she also had planned to kill her mother, Mrs. Robert D. Humphries, but lost her nerve when she saw her mother drive into the driveway shortly after Robert had been shot as he entered the den of the suburban home. 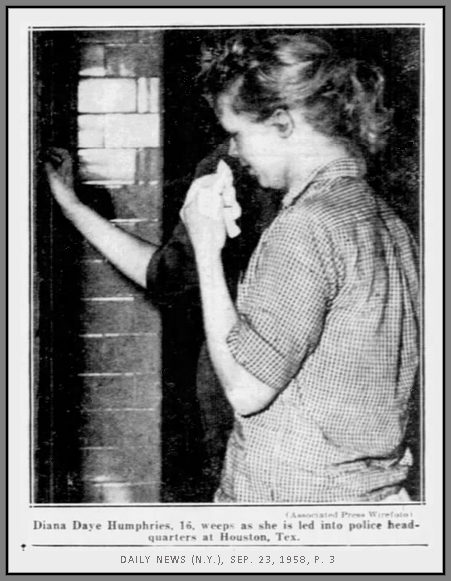 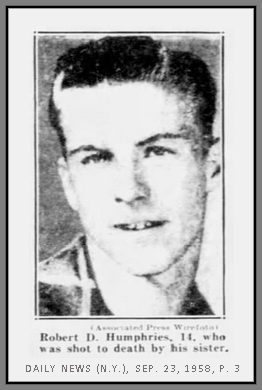 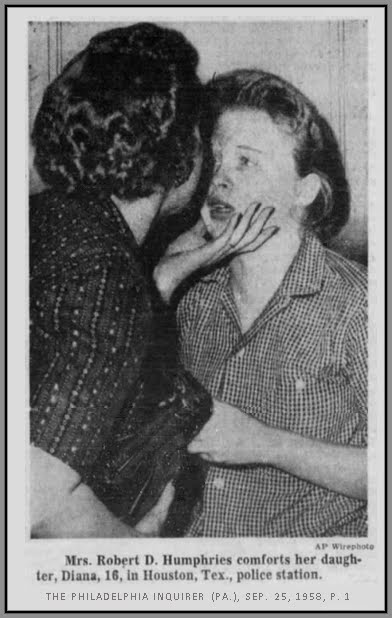