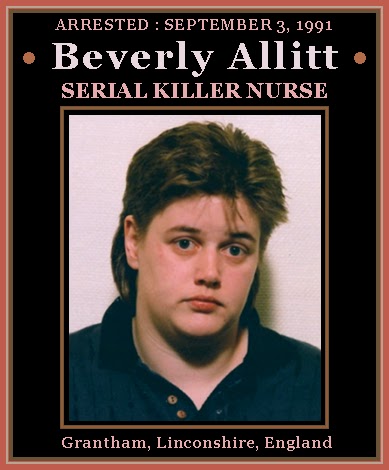 “‘The trouble is, the more you knew Beverly Allitt the more normal she appeared in every way,’ said Mrs Eileen Jobson, mother of Allitt’s lesbian lover, Tracy. Allitt stayed with the Jobsons for four months while the attacks at Grantham Hospital were under investigation.

During those four months Allitt left a knife stuck in Mrs Jobson’s pillow, tried to poison her dog, stole money from her purse, set fire to her curtains and poured bleach on her carpet. (She was acquitted of trying to murder Mrs Jobson’s son, Jonathan, by giving him insulin.).”

Wikipedia: Beverley Gail Allitt (born 4 October 1968) is an English serial killer who was convicted of murdering four children, attempting to murder three other children, and causing grievous bodily harm to a further six children. The crimes were committed over a period of 59 days between February and April 1991 in the children’s ward at Grantham and Kesteven Hospital, Lincolnshire, where Allitt was employed as a State Enrolled Nurse. She administered large doses of insulin to at least two victims and a large air bubble was found in the body of another, but police were unable to establish how all the attacks were carried out.

In May 1993, at Nottingham Crown Court, she received 13 life sentences for the crimes. Mr. Justice Latham, sentencing, told Allitt that she was “a serious danger” to others and was unlikely ever to be considered safe enough to be released. She is detained at Rampton Secure Hospital in Nottinghamshire.

Allitt was born on 4 October 1968 and grew up in the village of Corby Glen, near the town of Grantham. She had two sisters and a brother, her father Richard worked in an off-licence and her mother as a school cleaner. Allitt attended Charles Read Secondary Modern School having failed the test to enter Kesteven and Grantham Girls’ School. She would often volunteer for baby-sitting jobs and left school at the age of 16, taking a course in nursing at Grantham College.

Allitt had attacked thirteen children, four fatally, over a 59-day period before she was brought up on charges for her crimes. It was only following the death of Claire Peck that medical staff became suspicious of the number of cardiac arrests on the children’s ward and police were called in. It was found that Allitt was the only nurse on duty for all the attacks on the children and she also had access to the drugs.

Four of Allitt’s victims had died. She was charged with 4 counts of murder, 11 counts of attempted murder and 11 counts of causing grievous bodily harm. Allitt entered pleas of not guilty to all charges. On 28 May 1993 she was found guilty on each charge and sentenced to 13 concurrent terms of life imprisonment, which she is serving at Rampton Secure Hospital in Nottinghamshire.

Allitt’s trial judge recommended she serve a minimum term of 30 years, meaning she would not be released until at least 2022 and the age of 54, and then only if she was no longer considered to be a danger to the public. This represented one of the longest sentences given to a woman in Britain, exceeded only by those given to Rose West and Myra Hindley. In August 2006, Allitt launched an appeal against the length of her sentence. On 6 December 2007, Mr Justice Stanley Burnton, sitting in the High Court of Justice, London, confirmed that Allitt must serve the original minimum sentence of 30 years. It was reported that some families of Allitt’s victims had previously mistakenly believed that her minimum tariff had been set at 40 years.

Allitt’s motives have never been fully explained. According to one theory, she showed symptoms of factitious disorder, also known as Münchausen syndrome or Münchausen syndrome by proxy which may explain her actions. This controversial disorder is described as involving a pattern of abuse in which a perpetrator ascribes to, or physically falsifies illnesses in, someone under their care to attract attention.

Chronology:
Feb. 21 (23?), 1991 –old Liam Taylor, 7 mo. (elsewhere “seven months old”) died.
Mar. 3, 1991 – Eleven-year-old Timothy Hardwick had cerebral palsy and had been in hospital before. On March 3, he had an epileptic fit at home and was taken to Ward 4 at Grantham. Two days later he unexpectedly died from an apparent heart attack.
Mar. 10, 1991 – Five days later another child almost died of a heart attack. Fourteen-month-old Kayley Desmond was admitted as a precaution with a minor chest infection. She was expected to recover quickly but on March 10 the young nurse caring for her, Beverley Allitt, shouted for the ‘crash’ team. Kayley was having a heart attack. She survived, but doctors did notice strange mottled marks on her arm.
Mar. 28, 1991 – Five-month-old Paul Crampton; survived.
Mar. 30, 1991 – two-year-old Henry Chan; survived.
April 1, 1991 – three-month-old Becky Phillips was admitted to Ward 4 with a stomach upset. One of her nurses was Beverley Allitt.
April 5, 1991 – Allitt told another nurse she thought the child looked ill, but when the other nurse checked she could see nothing at all wrong.
April 22, 1991 – Then fifteen-month-old Claire Peck died.
May 2, 1991 – the hospital management called in the police. They had a secret meeting with Detective Superintendent Stuart Clifton.
Jul. 26, 1991 – By 26 July 1991, police felt that they had sufficient evidence to charge Allitt with murder but it wasn’t until November 1991 that she was formally charged.
Sep. 3, 1991 – “It was, however, not until two months later, on 3 September, that Allitt was arrested on suspicion of murdering Becky Phillips” [Vincent Marks and Caroline Richmond, “Beverly Allitt: the nurse who killed babies,” J R Soc Med. 2008 Mar 1; 101(3): 110–115.]
Feb 15, 1993 – she went to trial at Nottingham Crown Court on 15 February 1993.
May 28, 1993 – Sentenced to 13 concurrent terms of life imprisonment.
May 2005 – Allitt was the subject of a ‘Mirror’ newspaper enquiry in May 2005, when it was revealed that she had received over £25,000 in State benefits since her incarceration in 1993. 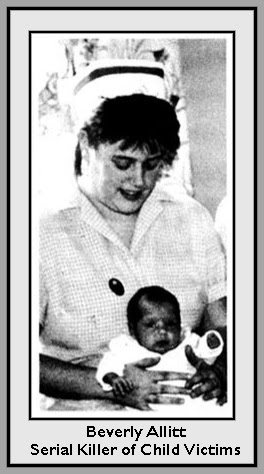 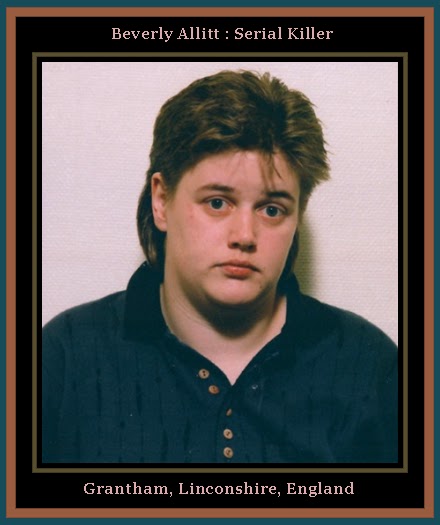 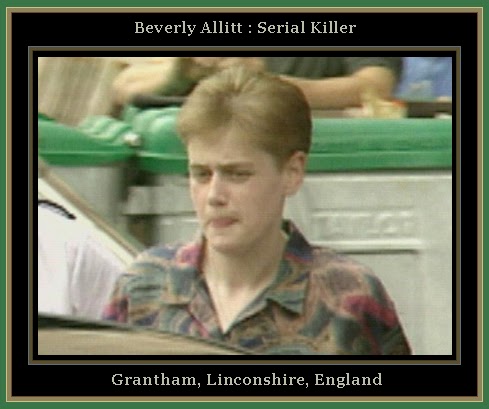 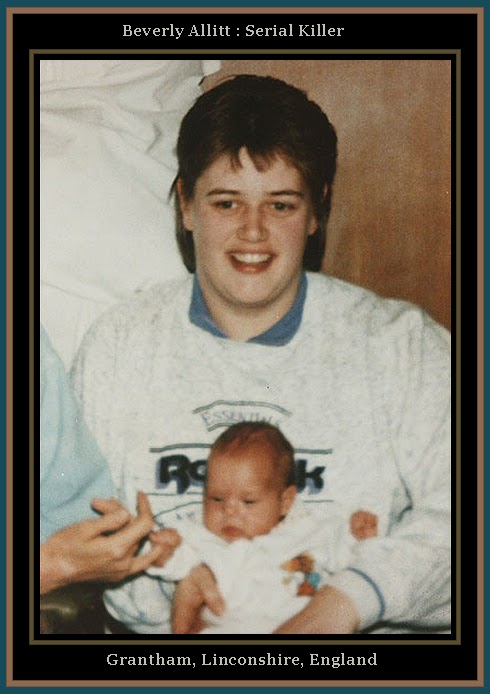 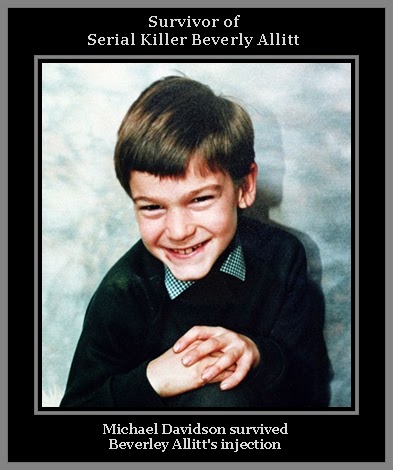 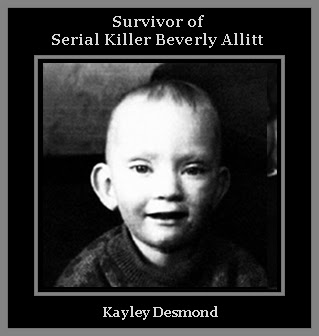 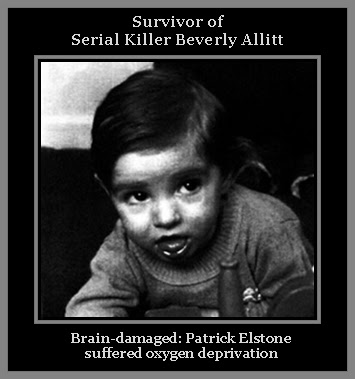 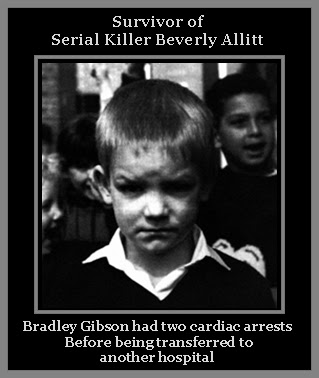 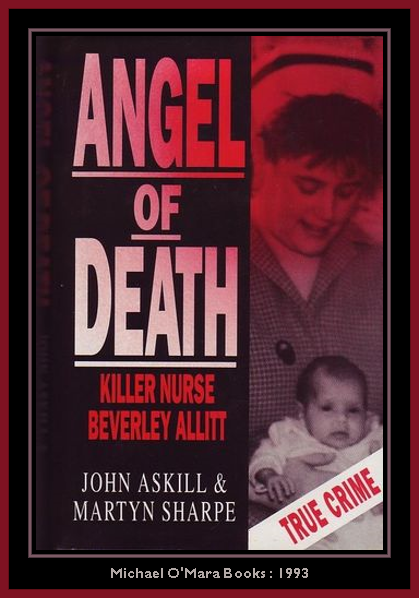