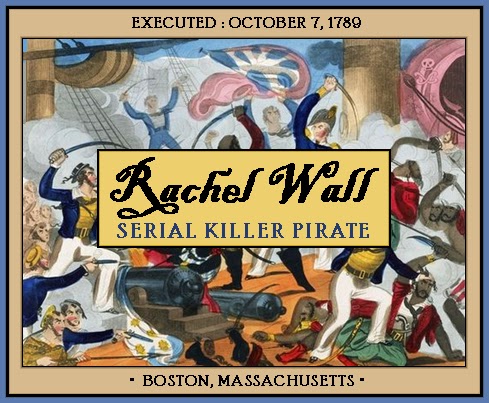 Rachel Wall was executed for a violent robbery, but she is thought to be responsible for 24 murders in partnership with her husband, George Wall.

EXCERPT: Rachel, around the age of 16, loved the water. The boats and dockyards always spoke to her. Born on a farm outside of Carlisle, Pennsylvania, it bored her; so, while in Harrisburg, she went to the docks. She was harassed, harangued and attacked by a group of girls. Enter George Wall –- a fisherman and former privateer who served in the Revolutionary War. He saved Rachel from the girls and Rachel, against her devout Presbyterian parents, eloped with him.

They went to Boston where she stayed on as a servant girl while George plundered. He convinced her to join him and his cohorts in piracy. It proved successful, for a time.

Their plan was this: anchor near an island during a storm. When it passed, make their boat appear damaged. When another boat came, Rachel would shout for help. Help would come. They’d then murder the would-be rescuers, steal their valuables, and sink their ship. Those awaiting the unfortunate sailors would think simply that the storm had taken them away, not Mr. and Mrs. Wall. Between 1781 and 1782 they captured 12 boats, murdered 24 sailors and kept around $6,000 in booty for themselves.

Rachel Wall (c.1760 – October 8, 1789) was an American female pirate, and the last woman to be hanged in Massachusetts. She may also have been the first American-born woman to become a pirate.

Wall was born Rachel Schmidt in Carlisle, in the Province of Pennsylvania, to a family of devout Presbyterians. She lived on a farm outside Carlisle as a child, but was not happy there. Having become a young woman she preferred the waterfront but she was attacked by a group of girls on the docks, and a man named George Wall came and rescued her. The two fell in love and, despite her mother’s concerns, they married.

~ Career as a pirate

When George went to the sea on a fishing schooner after the newlyweds moved to Boston, Rachel took up a job as a servant. When George came back, he brought with him five sailors and their lovers, and persuaded Rachel to join them. In one week, the party had spent all their money and the schooner set sail again, upon which George suggested they all become pirates. He borrowed another schooner from a friend, and the party set sail.

Rachel and her crew worked in the Isle of Shoals, just off the New Hampshire coast. After storms Rachel would stand on the deck and scream for help. When passers-by came to give aid, they were killed and all their goods stolen. The crew was successful in capturing twelve boats, stealing $6,000 cash, an indeterminate amount of valuables, and killing twenty-four sailors, all between 1781 and 1782.

Eventually, after her husband and the crew washed out to sea by accident, Rachel returned to Boston and resumed her role as a servant. However, she still enjoyed going to the docks and sneaking into harboured boats, stealing things from inside. Her final robbery occurred when she saw a young woman named Margaret Bender, wearing a bonnet which Rachel coveted. She attempted to steal the bonnet and rip Margaret’s tongue out, but was caught and arrested. She was tried for robbery on September 10, 1789 but requested that she be tried as a pirate, while maintaining that she had never killed anyone. However, she was found guilty of robbery and sentenced to be hanged on October 8, 1789. She is said to have quoted “...into the hands of the Almighty God I commit my soul, relying on his mercy...and die an unworthy member of the Presbyterian Church, in the 29th year of my age”, as her final words. Her death marked the last occasion a woman was hanged in Massachusetts.
***
EXCERPT: On 2 April 1789, Boston’s Independent Chronicle and the Universal Advertiser printed the following item on the attack, which had taken place on 27 March.
“A singular kind of robbery, for this part of the world, took place on Friday evening last : As a woman was walking alone, she was met by another woman, who seized hold of her and stopped her mouth with her handkerchief, and tore from her head her bonnet and cushion, after which she flung her down, took her shoes and buckles, and then fled. She was soon after overtaken and committed to jail.” (Proceedings of the Massachusetts Historical Society, Second Series, Vol. XIX, Boston: 1907, 184)
*** 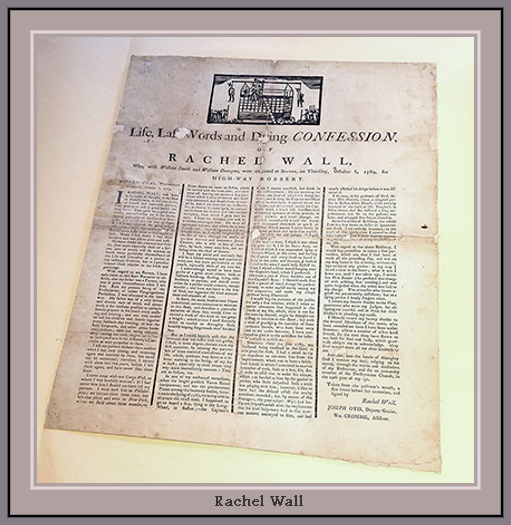