EXCERPT: [Haitian President] Duvalier also chose Sanette Balmir, a lesbian, to command the [Tontons] Macoutes in Jérémie, near the tip of the southern peninsula. Balmir, a convicted thief, had felt publicly humiliated by having to perform convict labor in black-and-white prison garb on the streets of Jérémie. As Macoute comandant, she targeted relatively prosperous mulattos with extreme savagery in the massacres known as the Vespers of Jérémie. [Andrew Reding, Democracy and Human Rights in Haiti, World Policy Institute, ‎2004, p. 82]

[T]hey were commonly known as Tontons Macoutes, Creole for “Uncle Knapsack,” evoking a Vodou image of a bogeyman who takes away misbehaving children in a peasant’s straw knapsack. In rural areas, their preferred dress was blue denim and red scarves, as the Cacos had worn. In urban areas they emulated Duvalier himself, who deliberately dressed in the style of Vodou lwa (spirit) Bawon Samdi, guardian of the cemetery, in black suits, hat, and sunglasses (see next section). The Tontons Macoutes were part of a conscious strategy to identify spiritual forces and nationalism with loyalty to Duvalier, and to instill fear in opponents. [Andrew Reding, Democracy and Human Rights in Haiti, World Policy Institute, ‎2004, p. 16]

Wikipedia: The Jérémie Vespers refer to a massacre that took place in August, September and October 1964 in the Haitian town of Jérémie. It took place after a group of 13 young Haitians calling themselves “Jeune Haiti” landed on August 6, 1964 at Petite-Rivière-de-Dame-Marie with the intention of overthrowing the regime of François ‘Papa Doc’ Duvalier.

The massacre was called the “vespers” because many of the families killed by the regime are remembered as the families who took many aforementioned “vesper” picnic excursions.

Several of the group were from the town of Jérémie. During two months they fought in the hills, the regime ordered the arrest and murder of Jeune Haiti’s family members. 27 people were murdered, ranging in age from 85-year-old Mrs Chenier Villedrouin to 2-year-old Régine Sansaricq. Other children murdered were aged 4, 6, 8, 10, 16, 18. (A full list of victims is included in the Wikipedia article.)

The members of “Jeune Haiti” were killed one by one in combat with Haiti’s army, until the last two survivors, Louis Drouin and Marcel Numa, out of ammunition, were captured alive, brought back to Port-au-Prince and shot in public against the cemetery wall on November 12, 1964.

Wikipedia: The Tonton Macoute (Haitian Creole: Tonton Makout) or simply as the Macoute was a special operations unit within the Haitian paramilitary force created in 1959 by dictator François “Papa Doc” Duvalier. In 1970 the militia was renamed the Milice de Volontaires de la Sécurité Nationale (Militia of National Security Volunteers or MVSN, perhaps named after the homonymous Italian Fascist paramilitary organisation. Haitians named this force after the Haitian Creole mythological bogeyman Tonton Macoute (“Uncle Gunnysack”), who kidnaps and punishes unruly children by snaring them in a gunny sack (French: macoute) and carrying them off to be consumed at breakfast.

Papa Doc Duvalier created the Tontons Macoutes because he perceived the military to be a threat to his power.

After the July 1958 Haitian coup d’état attempt against President François Duvalier, he disbanded the army and all law enforcement agencies in Haiti and executed numerous officers. He created a paramilitary force in 1959, Milice de Volontaires de la Sécurité Nationale (Militia of National Security Volunteers or MVSN), two years after he became president, that answered only to him. He perceived a threat to his regime from the regular armed forces.

Duvalier authorized the Tontons Macoutes to commit systematic violence and human rights abuses to suppress political opposition. They were responsible for unknown numbers of murders and rapes in Haiti. Political opponents often disappeared overnight, or were sometimes attacked in broad daylight. Tontons Macoutes stoned and burned people alive. Many times they put the corpses of their victims on display, often hung in trees for everyone to see and take as warnings against opposition. Family members who tried to remove the bodies for proper burial often disappeared themselves. Anyone who challenged the MVSN risked assassination. Their unrestrained state terrorism was accompanied by corruption, extortion and personal aggrandizement among the leadership. The victims of Tontons Macoutes could range from a woman in the poorest of neighborhoods who had previously supported an opposing politician to a businessman who refused to comply with extortion threats (ostensibly as donations for public works, but which were in fact the source of profit for corrupt officials and even President Duvalier). The Tontons Macoutes murdered between 30,000 and 60,000 Haitians.

Luckner Cambronne led the Tonton Macoute throughout the 1960s and the beginning of the 1970s. His cruelty earned him the nickname “Vampire of the Caribbean”. He profited by extortion carried out by his followers. In 1971, President Duvalier died and his widow Simone, and son Baby Doc Duvalier ordered Cambronne into exile. Cambronne moved to Miami, Florida where he lived until his death in 2006.

Some of the most important members of the Tonton Macoute were Vodou leaders. This religious affiliation gave the Macoutes a kind of unearthly authority in the eyes of the public. From their methods to their choice of clothes, Vodou always played an important role in their actions. The Tontons Macoutes wore straw hats, blue denim shirts and dark glasses, and were armed with machetes and guns. Both their allusions to the supernatural and their physical presentations were used with the intention of instilling fear and respect.

The Tontons Macoutes were a ubiquitous presence at the polls in the 1961 election, in which Duvalier’s official vote count was an “outrageous” and fraudulent 1,320,748 to 0, electing him to another term. They appeared in force again at polls in 1964, when Duvalier held a rigged referendum that declared him President for Life. 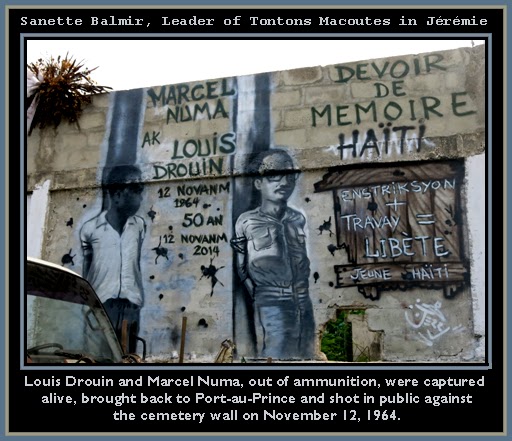