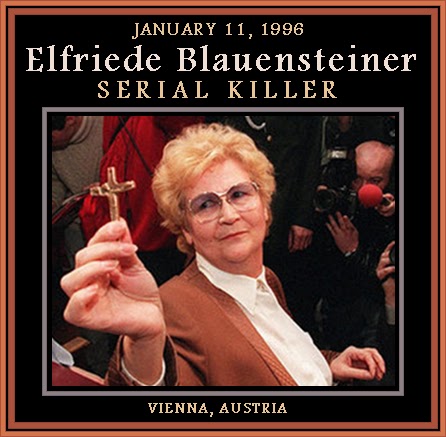 EXCERPT: Elfriede Blauensteiner, described as the most venomous female poisoner in Austria since the Middle Ages, has a female fan club who applaud Austrian women standing up to their men, by whatever means. [Gail Bell, The Poison Principle, Australia, Picador, 2001, 2002; later edns: Poison, 2001, The Poisoner: A Story of Family Secrets, St. Martins Griffin, 2003]

She was a lunatic’s lunatic. Elfriede Blauensteiner was one of the most unique serial killers of modern times. A compulsive roulette gambler who in one year alone dropped into the casino, Spielcasino Baden, on no less than 230 occasions, she was suspected of 15 murders and confessed to six, offering “good” reasons why each needed to be polished off. When investigators asked about other murders she was suspected of having committed her reply was “How much will you pay me for it?”

The police saw this bejeweled fur-sporting bourgeoise as a manipulative charming “visionary” fantasist. She fit the profile of Histrionic Personality Disorder and was incapable of empathy. She was a psychopath, albeit an amusing one. She was a cold-blooded killer with no remorse and preyed upon the lonesome and fragile in order to fuel her lavish tastes and her reckless gambling passion. She was capable of generosity with her blood money though. In the Baden casino would hand out chips to wiped out losers. She would shower neighbors with expensive gifts. When her daughter she lost her job, Elfriede gave her the equivalent of about $150,000 to help out.

Yet the serial widow’s dark side would show itself strikingly in her bold and shameless trial testimony. On trial admitted an intense hatred for two things: poverty and the male sex. Her first husband divorced her after the birth of their daughter. “Since then, I’ve hated men” Blauensteiner should later testify. She was an admitted misandric serial killer.

Her first murder came in 1981 at the age of 50, was that of the janitor of her apartment building, Erwin Niedermayer, whom, she asserted she had helped to commit suicide. “He was a criminal.” “I despise him because he always beat his wife and children.”

She came across her second addictive habit after gambling – serial murder – serendipitously. While looking after Otto Reinl,a 78-year-old diabetic, she began to experiment with his blood sugar controlling medication, Euglucon. She began to give him modest overdoses and discovered that when done gradually the result was fatal: producing a death that seemed “natural.”

Murder number three did not occur for another nine years. It was her second husband, Rudolf Blauensteiner, who died in August 1992 “after being in a mysterious coma for 10 days.” His widow told police, “Rudi deserved to die.”

She developed a fierce gambling habit and she was not blessed with luck. She lost and she lost. From then on she eyed wealthy elderly targets whose estates she could loot with forged wills concocted with the assistance of a crooked attorney, Harald Schmidt. After the will was readied, she would prepare food for the victim full of Euglucon (hypoglycaemic drug) and Anafranil, an antidepressant. When close to death she would call for emergency assistance and they would then expire, in most cases, on hospital premises.

Her first mark in the fund-raising campaign to support her gambling habit was a wealthy 84-year-old female neighbor. Elfiede offered her assistance and her caring gave her a plausible explanation for having  the woman willing 170,000 Euros to her friend. Franziska Köberl met her death on December 15, 1992 and Elfriede collected her loot.

She then started using the “personal ads” to lure elderly men, offering to be a “loyal caring companion.” In 1994 she sunk her claws into a retired 64-year-old, Friedrich Döcker, and promptly married him. Once he transferred the deed to his home to his new bride his fate was sealed. It took extra effort to finish off this resilient spouse. He managed to survive a dose of 20 tablets worth of Euglucon. Finally he met his death on June 11, 1995. Bilateral pneumonia resulting from cardiovascular failure, was the official cause of death. Döcker’s body is in the Vienna Anatomical Institute in a tank of formaldehyde. The widow had donated his remains to medical science.

Blauenstein was a quick worker; placed another ad – even before Döcker had passed on – reading: “Widow, sixty-four . . . would like to share the autumn of her life with a widower.” She got plenty of replies. She selected the respondent named Alois Pilcher. Blauensteiner had an especially attractive haul in her sights, Pilcher’s $400,000 home and it was her impatience that led to her downfall. She got her lawyer to draw up the usual fake will and rushed her usual “treatment” of incremental drugging to death. Rather than gradually prepare her prey for an innocent-looking “natural” death in the hospital, Elfried took short-cuts. She put 70 doses of Euglucon in his milk, nce unconscious she stripped her husband naked place ice-cold towels on him, opened the window and locked the door. He developed pneumonia and died on November 11, 1995. It was seen as a sudden and unexpected death by the man’s family and he had died at home in the presence of a woman twice widowed before. At Pilcher’s funeral on December 1, his nephew, who would have inherited the money the widow had soaked up, harbored suspicions and decided to have his corpse exhumed. Thus began the investigation of the the Black Widow and the discovery of her series of crimes.

Her trial in Krems in February 1997 for the Pilcher murder became a media circus, one which Elefiede milked to the limit with the histrionics she delighted in. She would show up ready to perform for an army of photographers and journalists, posing with her gold cross raised for the cameras. She’d clasp her gold crucifix in her fist raising it in the air – for the ready cameras – and dramatically announce, “I wash my hands of it,” evoking Pontious Pilate of scripture. She explained only God could judge her and admonished the newsmen: “If there’s a vampire among you, he will turn you to a heap of ashes.” Elfriede was, in journalism lingo, “good copy,” the best you can get. Her trial testimony was likewise strewn with sensational rhetorical nuggets: “I pity no man when he dies” (“Es ist um keinen Mann schade, wenn er stirbt”).

She told reporters she was looking forward to prison, After all, she would not have to cook for herself and she could sit down and write her memoirs, which would, no doubt, be a bestseller. She was, she said, on the lookout for a well-heeled publisher. She released some of her writings to the Austrian weekly “News”. She told her readers she did nothing evil, because she only wanted to help her sickly husbands. She remained optimistic and stated her hope to marry again once the troublesome and unreasonable murder trial was over and done with.

She was not so lucky. On March 7, 1997 the Krems court found her guilty of murder and  Sentenced to life in Schwarzau prison. Police continued their investigations however, ordering autopsies on neighbor Franziska Köberl who passed away in late 1992 and ex-husband Friedrich Döcker who died back in 1995. In July 2000, the Vienna public prosecutor indicted Blauensteiner for two more murders. On April 20, 2001 she was convicted of each and was handed an additional life sentence. It was her last trial though police suspected her of many more murders, up to fifteen.

Her story inspired a movie, “Die Gottesanbeterin,” (“The Mantis”), which was released in 2001. On November 16, 2003 at the age of 72, Elfriede Martha Blauensteiner, died in Schwarzau prison. from the effects of a brain tumor and was buried in the Feuerhalle Simmering cemetery.

1981 – Erwin Niedermayer, 59; “janitor of her apartment building who, in 1981, she ‘helped commit suicide’ because he was abusing his wife and children.” EB: “He was a criminal.” “I despise him because he always beat his wife and children.”
1986 – second (called the first in some reports) victim was Otto Reinl (“Reindl”), 78, diabetic,  died in her care.
Aug. 1992 – Rudolf Blauensteiner, second husband, died “after being in a mysterious coma for 10 days.” EB: “Rudi deserved to die.”
Dec. 15, 1992 – Franziska Koeberl (Köberl), 84, “a wealthy woman who was Blauensteiner’s neighbour in Vienna died after being cared for by her.” 170,000 Euro takings.
1994 – meets through a newspaper personal ad and marries Friedrich Doecker (Döcker), 64, retired, marries him (husband No. 3). “His honeymoon lasted until he transferred his house over to his spouse.”
May 1994 – married. called him “the love of my life.”
Jun. 11, 1995 – Friedrich Döcker, 65, dies. Bilateral pneumonia following cardiovascular failure, was the official cause of death.
Nov. (?) 1995 – Even before Pilcher’s death, swift Elfriede had switched the next personal ad.”; “loyal caring companion.”
Nov. 11, 1995 – Alois Pilcher, 77, Krems (30? Miles from Vienna), murdered. “at least 70 doses of euglucon in his milk, a drug to lower his blood sugar.” Fake will got her 190,000 Euro.
Dec. 1, 1995 – Alois Pilcher funeral; nephew was suspicious and had the corpse autopsied.
Jan. 11, 1996 – EB, 64, confessed to killing six people; later recanted. “I killed only people who deserved to die,” she said. She reportedly possessed £6 million at time of arrest.
Feb. 10, 1997 – trial begins in Krems; murder of Alois Pichler. “On her first day in court, Elle appeared in a beige suit and clutching a little golden crucifix. “My hands are clean. I’ve nothing to hide,” she told the throng of reporters that crowded around the steps of the courthouse in Krems, a town 30 miles west of Vienna. Asked if she would plead guilty, she said: “I would never kill. I believe in my innocence.” Then, in a strange existential moment, she proclaimed: “Death is only the beginning of eternal life.”
1997 – “Meanwhile Elfi has released her memoirs in the Austrian weekly “News”. In them she claims that she has done nothing evil, because she only wanted to help her husbands. Always the optimist, Elfriede still hopes to marry again once her legal troubles wash over.”
March 7, 1997 – Krems; Sentenced to life in prison. Schwarzau prison.
1997 – Harald Schmidt, her lawyer, was sentenced to 7 years.
Jul. 2000 – “In July 2000, the Vienna public prosecutor brought in cases Döcker and Köberl a second murder charge.
2001 – after exhumation of two more suspected victims confirmed more traces of deadly caretaking - and Euglucon.
Apr. 20, 2001 – “The trial ended on 20 April 2001 with two clear convictions.”
Nov. 16, 2003 – EB, 72, dies in Schwarzau prison. Buried in the Feuerhalle Simmering cemetery.
Suspected additional murders: “Blauensteiner is already serving a life sentence for murder. Police say she could be responsible for a further 10 deaths.”
***
Method:
Euglucon – hypoglycaemic drug.
Anafranil – antidepressant.
Food, Coffee, milk.
Nicknames –  “Devil Woman,” “Poison Widow”, “Merry Widow”, “Black Angel”, “widow Bluebeard.”
***
[“‘Schwarze Witwe’ gab lachend vier Giftmorde zu,” Berliner Kurier (Germany), Jan. 16, 1996]
[Adrian Bridge, “Fatal games of the ‘Black Widow’,” The Independent (London, England), Jan. 20, 1996]
[APA, “Elfriede Blauensteiner diesmal wegen Doppelmordes vor Gericht” (Elfriede Blauensteiner this time in court for double murder”), Die Standard (Austria), April 13, 2001]
[Michael Leidig, “Serial killer widow faces two more charges,” The Telegraph (London, England), Apr. 19, 2001]
[Reinhard Göweil, “Habe noch tagelang sauber gemacht” (“I still have days cleaned”),  Weiner Zeitung, Nov. 14, 2016]
[Robin Odell, The Mammoth Book of Bizarre Crimes, 2010. Running Press Pub.]
[Clemens Engert, “Legendäre Kriminalfälle: Elfriede Blauensteiner” (“Legendary criminal cases: Elfriede Blauensteiner”), Profil, 12. 1. 2016]
*** 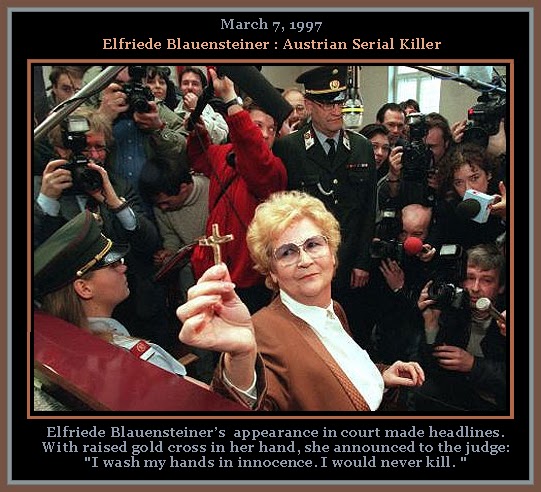 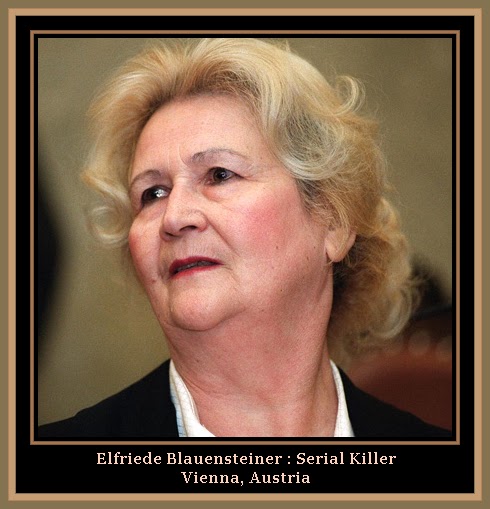 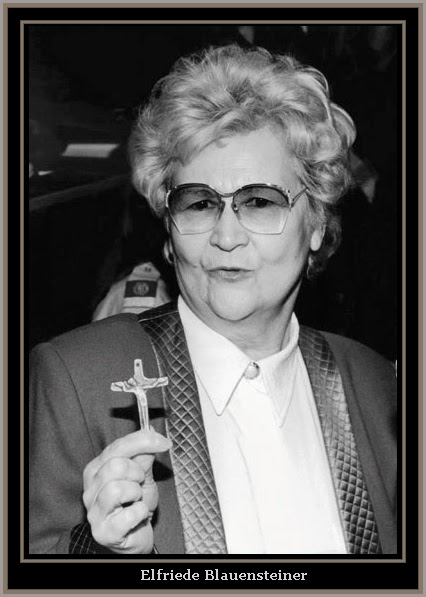 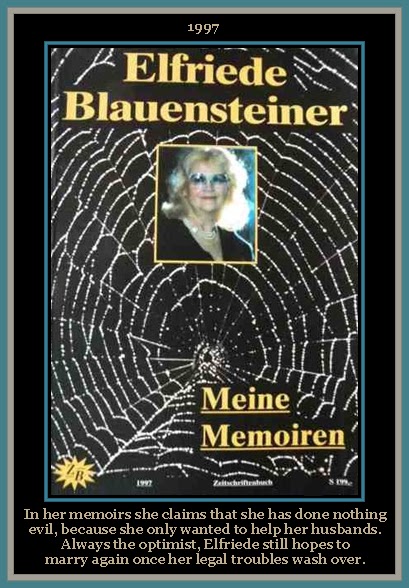 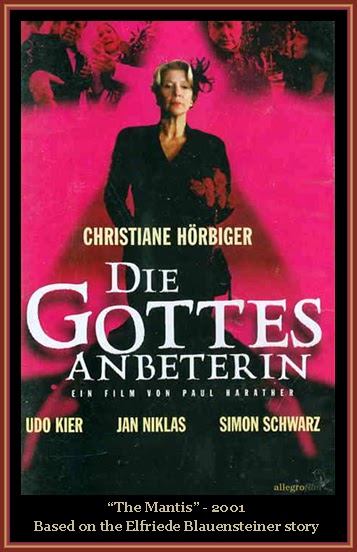 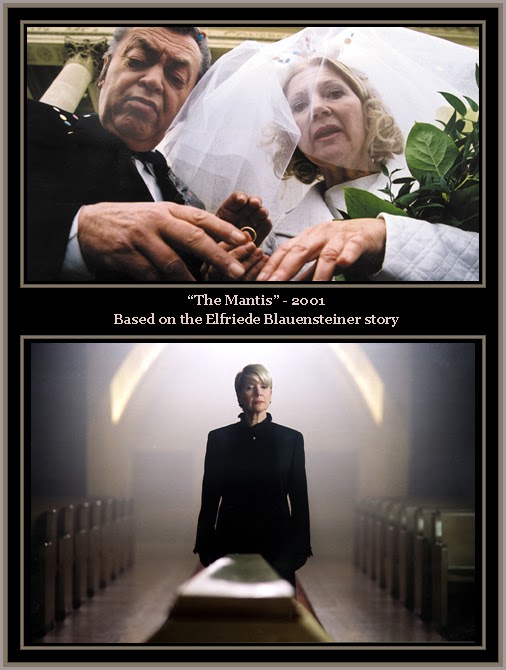