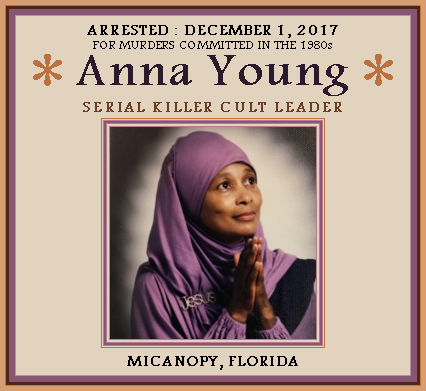 Anna Young, “Mother Anna,” and husband, Jonah Young, started a cult called The House of Prayer for All People, in Micanopy (near Gainesville), Alachua County, Florida. “Members and their children had to change their birth names to biblical ones and went by the titles of 'Brother' or 'Sister.' As the leader, Young dubbed herself 'Mother Anna.'  They were also required to wear Old Testament-style 'holy clothing,' including long robes and beards for men and long dresses and head coverings for women.” [Dailymail, 25 March 2021]

It is suspected that during her career as a cult leader she murdered four persons. She and husband are thought to have murdered their six-year old daughter, Catherine, whom they reported “missing” on September 1, 1973.

In November 2017, A fugitive from justice, Joy Fluker turned herself and her mother in.

She remembers when Nickelson was burned, but she doesn’t believe that it was intentional.

Fluker said her mom put detergent in all the kids’ baths as a cleansing measure.

“She didn’t know any better, because she didn’t believe in regular medicine. She believed, she was an herbalist. Yellow root tea was the cure for everything. Prayer and supplication. We didn’t go to doctors.”

On Dec. 27, 2016, Joy Fluker placed a desperate call to the Alachua County Sheriff’s Office, struggling with the internal conflict of whether to report the crimes she suspected her mother was responsible for. A lengthy investigation followed, leading  to 75-year-old Anna Young’s arrest on Nov. 30, 2017 in Marietta, Ga. , where she had been living under her latest husband’s last name, Anderson.

Anna Young served only 42 days of her sentence. It was reported that Anna Young had died on Mar. 31, 2021 at the Florida Women's Reception Center in Ocala. The circumstances of her expiration were not reported.

6)      Robert Davidson (“Brother Jonah”), AY husband, dies; found crushed under a Ford pick-up truck that he had been working on in a junkyard. His death was deemed an accident but many are suspicious of foul play. Mar. 1988.

The House of Prayer for All People, Micanopy (near Gainesville), Alachua County, Florida

Sep. 1, 1973 – Catherine Davidson (6; AY’s daughter); Joy Fluker (AY’s daughter), said her half-sister recalled Young beating the child, and locking her in a closet where she died. Young reported 6-year-old Catherine Davidson missing in 1973 at Lake Michigan. Catherine was never found. Young is also suspected in the death of another daughter, Catherine, in the 1970s in Chicago through the same sort of discipline given to Emon. Catherine's death was reported as a missing person case — the family had purportedly been at a Michigan state park and Catherine fell into a river. Her body was never found.

Sep. 1983 – The couple then bought a farm in Gainesville, Florida, in September of 1983. It was at this farm where the cult, House of Prayer for All People, would take place.

Sept. 28, 1983 – Robert and Anna Davidson and a fellow believer they met in Georgia signed the deed on Sept. 28, 1983 to four acres of property in a rural stretch of Florida.

1983 – Katonya Jackson (2); Meanwhile another family, Lea Vera Jackson and her son, John Neal, believe Young was responsible for the 1983 death of Jackson’s daughter, Katonya (2), through abuse and starvation when the three lived at House of Prayer.

Robert and Anna Davidson and a fellow believer they met in Georgia signed the deed on Sept. 28, 1983 to four acres of property in a rural stretch of Florida.

1983 – Sabrina Hamburg moved to the House of Prayer with her 1-year-old Marcos in 1983 when she was 24 years old. she saw her son being “beaten, starved, punished and placed in a small closet for days at a time without food or water” at Young’s direction, according to court records.

“She beat him so bad, she put him in a box,” Hamburg said through tears on the podcast, adding that the situation was “out of my control.”

Dec. 1984 – Marcos Cruz (2); Mother Anna claimed that Marcos was “full of the devil” and ordered that his mother abandon him. In December, Sabrina and another member flew to Puerto Rico and left 2-year-old Marcos outside of a Catholic church. / 1985 – Sabrina Hamburg told investigators Young ordered her to go to Puerto Rico and abandon the Marcos on the street when he was about 4 years old. Hamburg said she did as Young said and left him outside a Catholic Church on a bench. It was the last time she saw her son.

1985 – John Neal (8); A skin infection that landed 8-year-old John Neal in the hospital finally prompted a child abuse investigation. The same doctor who treated his sister Katonya noticed scars all over his body, and part of his ear missing. The ACSO pointed out there are many hidden compartments under the house and in walls on the property. “This house, it was designed to conceal,” Forgey said. “The hidden compartment on the farm,” Joy Fluker explained. “Those were areas built to hide John Neal.” Forgey said child abuse allegations led investigators to the house. “When they went in, they would see a very clean house,” Forgey said. “Very orderly, very organized.” What they did not see was John Neal. “Once again, there were no charges there, so it flew under the radar,” Forgey said. As an adult John Neal, whose mother had joined the House of Prayer, said Young was responsible for the death of his sister Katonya Jackson, who died of a seizure.

1986 – Emon Harper, who was called 'Baby Moses' by members of the religious community, was taken to the House of Prayer as a baby in 1986 because his mother was unable to care for him.

1980s – O. D. Pough “Elder Adam,” who would later be known as Elder Adam, was one of the first members of the House of Prayer in the early 1980s. Joy Fluker said although she did not know if Pough was legally married to a woman at the House of Prayer, the two were married in the eyes of Young. At one point, Young ordered the couple not to have sex. "She said he had a lust demon in him, Joy Fluker said. "At the time I didn't understand." Joy Fluker said she didn't understand how a man could have a "lust demon" if he was married to the woman. Joy Fluker said everyone at the compound felt compelled to admit anything to Young, including when the two had sex even though Young told them not to. "She ordered his castration," Joy Fluker said. Relatives told investigators Pough iced his penis and cut it off himself. Pough's daughter Sharon told investigators the deed referenced Young using scripture that "if your hand offend you, cut it off. If your eye, pluck it out. In this case, Young used the same logic. Members recall the infection the man received was terrible and he almost died. Pough left the cult in 1991 and moved to Mississippi.

Mar. 1988 – Robert Davidson, AY husband;  dies; found crushed under a Ford pick-up truck that he had been working on in a junkyard. His death was deemed an accident but many are suspicious of foul play.

1992 – Nikki Nickelson  (12); In 1992, Mother Anna was convicted of child abuse after having caused a 12-year-old girl to have permanent burn scars. Anna Young’s church collapsed in 1992 after the case of 12-year-old Nikki Nickelson. “She received a chemical bath. She had chemical burnings on her legs,” Forgey said. Police reports say Nikki was held down in metal tub filled with chemicals and scalding water.   “It took these ways to exonerate the devil from people,” Forgey said. Reports said Young was punishing the girl for improper hygiene. A police report said a male member of the cult held Nikki down in the water while Young scrubbed her. The report said Nikki was allowed out of the tub when another member of the cult in the bathroom pointed out skin was coming off of her foot. Nikki suffered second degree burns and had to learn how to walk again.

2001 – Charged with child abuse, Anna Young fled with Joy Fluker and remained on the run for nearly a decade. Recognized from the FBI’s most wanted list, Young was turned in in 2001. In 2001, she was convicted and sentenced to six months and 12 days in jail. Following her release, she moved to Marietta, Cobb County, where she kept her past hidden from her neighbors for more than 15 years.

Dec. 27, 2016 – Joy Fluker placed a desperate call to the Alachua County Sheriff’s Office, struggling with the internal conflict of whether to report the crimes she suspected her mother was responsible for.

Dec. 1, 2017 – Anna Young arrested after her daughter, Joy Fluker (39), told authorities here about Emon’s death, the House of Prayer and much more.

·         John Neal, 40, was a child at the cult. Police reports show he was beaten, but lied about it to detectives when asked as a child. His name there was “Brother James.” He now lives in Kennesaw with his wife and children.

·         Anna Elizabeth Young, 76, led the cult, known as the House of Prayer for All People. The subject of multiples investigations over the past half-century, Young is accused of abusing many children and killing a toddler. Her name at the cult that she uses to this day is “Mother Anna.” She had been living at the same Marietta home for more than 15 years.

·         Katonya Neal was 2 years old when she died of a seizure. Her brother John Neal, accuses Anna Elizabeth Young of killing his sister by not paying for her medication. Neals calls his sister “Kay.”

·         Robert Davidson died accidentally when a pick-up truck he was working on crushed him in March 1988. He helped run the cult with his wife Anna Elizabeth Young. His cult name was “Brother Jonah.”

·         Cathy Davidson was a 6-year-old girl who went missing in 1973 at a Michigan state park. She is Robert Davidson’s daughter and Anna Elizabeth Young’s step-daughter. Michigan police and the FBI are re-investigating the case in light of Young’s charges in Florida.

·         Joy Fluker lives in north metro Atlanta with her husband and children. She grew up inside the cult with her mother Anna Elizabeth Young. Her father is Robert Davidson. She described being abused at the cult but not as severely as others. Her name at the cult was “Sister Mary.”

·         Fonda Favors, 45, spent four years at the cult with her sister and mother. She now lives in nearby Ocala, Florida. Her name at the cult was “Sister Rachel.”

·         Emon Harper, known as “Moses” in the cult, was 2 or 3 years old when police say he was beaten and starved to death at the cult by Anna Elizabeth Young. His mother in Chicago gave him to the cult because she couldn’t care for him, police records indicate.

·         Sharon Pough was 20 years old when the cult was formed with the help of her father O.D. Pough. She told police she saw Emon Harper’s body being burned. 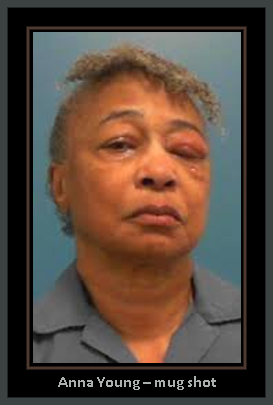 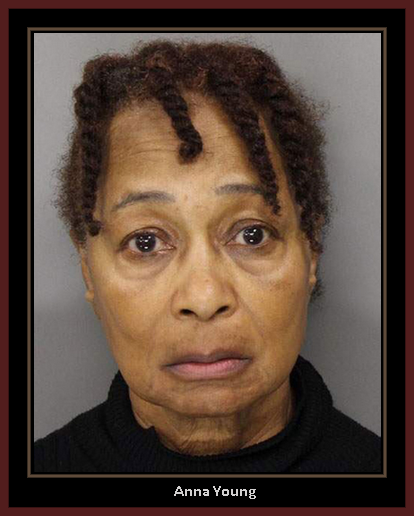 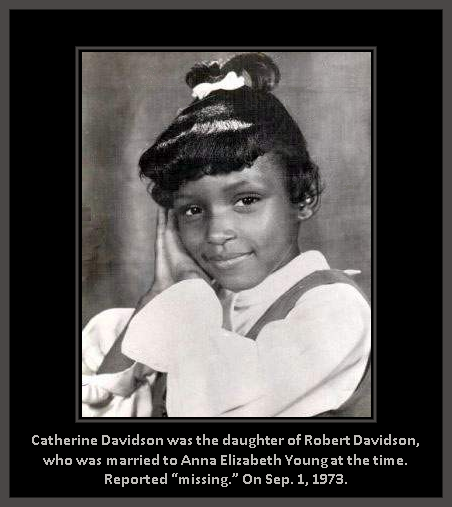 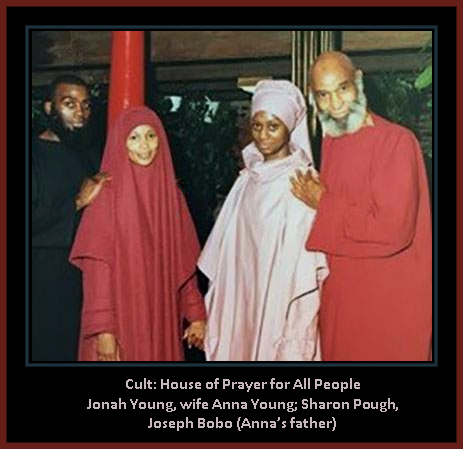 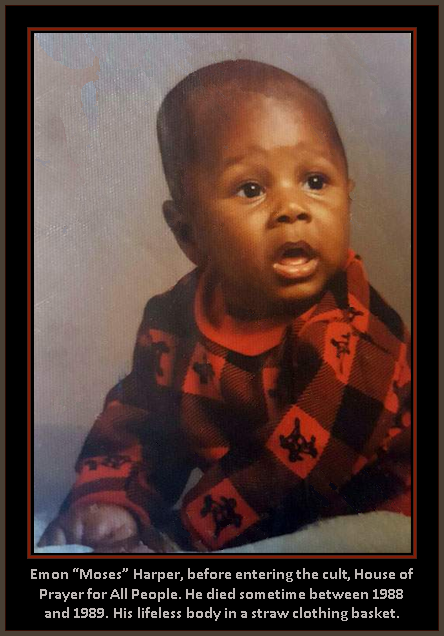 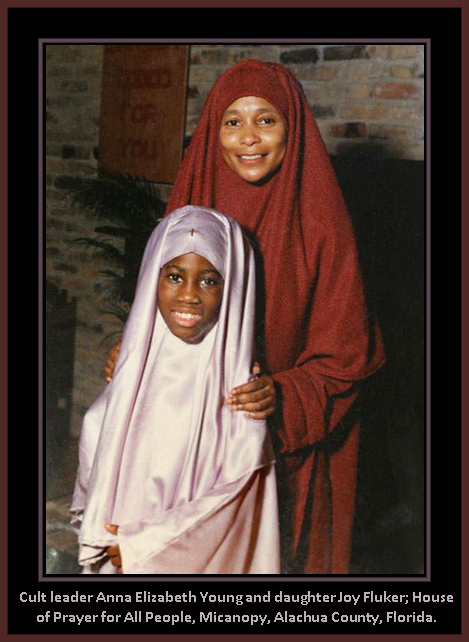 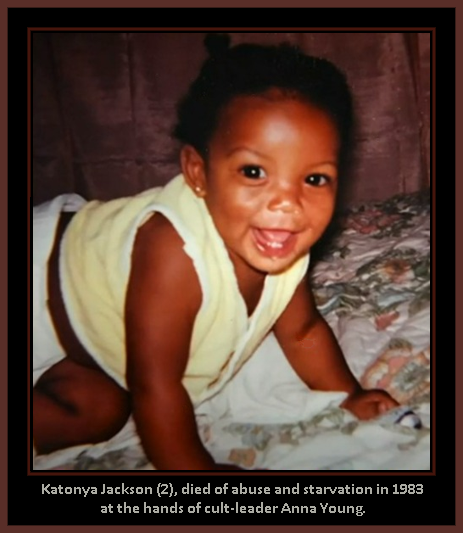 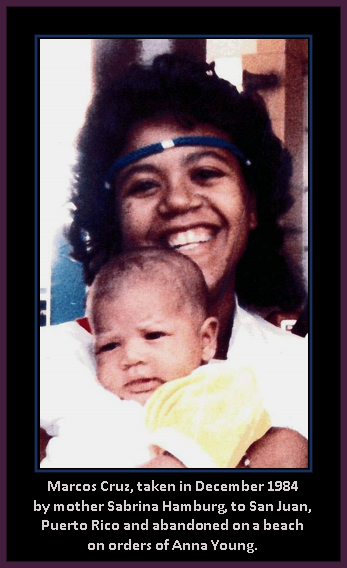 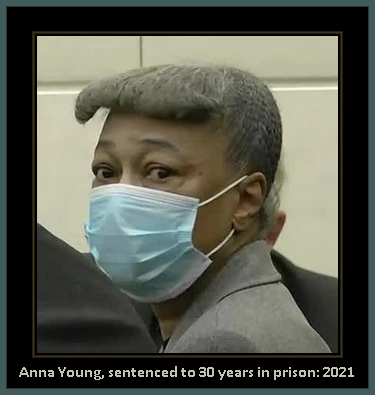 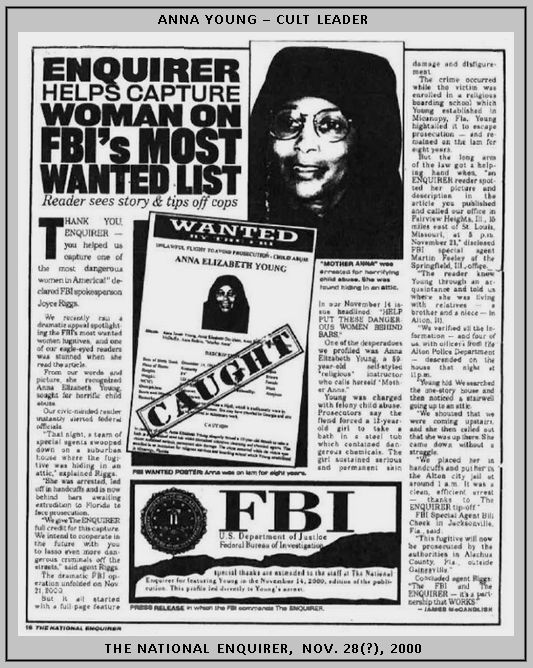 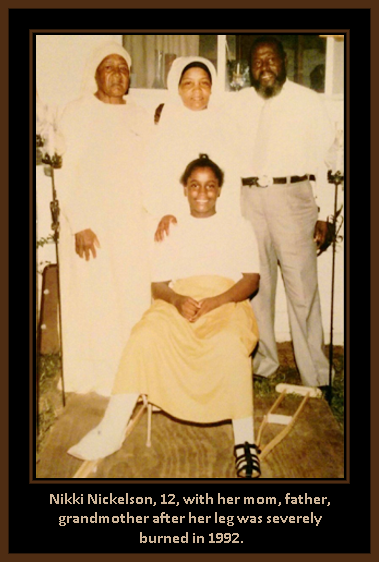 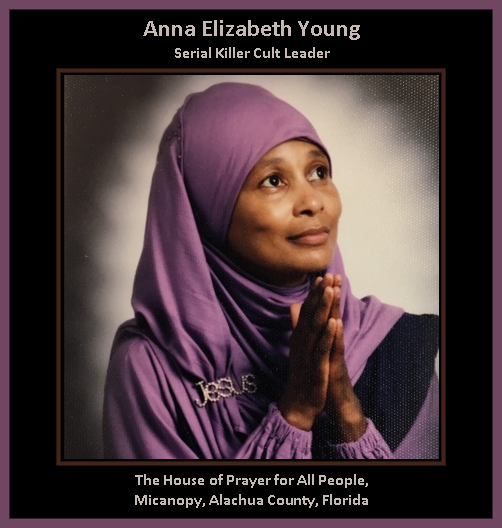