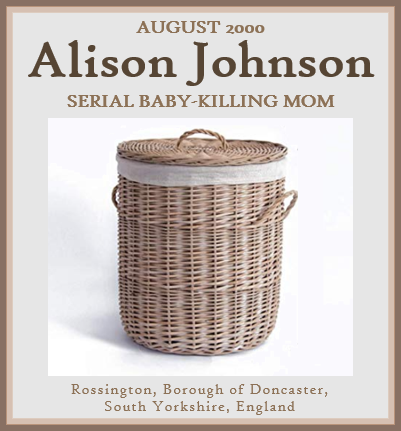 NOTE: News reports refer to the strong suspicion of a third dead baby, but, so far, the reason for that suspicion has not been found in news articles.

FULL TEXT (Article 1 of 4): A woman has been charged with murder after the discovery of a new born baby girl's body at a house in Rossington near Doncaster. A post mortem examination has shown that the child had been dead for up to three weeks. Alison Johnson, 34, will appear before Doncaster magistrates later on Friday charged with murder. The body of another new born baby has also been found at the house and South Yorkshire Police say that child could have died up to five years ago. Investigations into the second death are continuing.

***
FULL TEXT (Article 2 of 4): Detectives investigating the deaths of two newborn babies said last night their efforts to find the body of a possible third child had drawn a blank. The search followed the discovery of the body of a newborn baby girl at a home in Rossington, near Doncaster, on Monday. The remains of a second baby were found at the same address on Thursday. Mother-of-five Alison Johnson, 34, appeared in Doncaster magistrates court on Friday charged with murder and was remanded in custody for seven days.

***
FULL TEXT (Article 3 of 4): Detectives investigating the deaths of up to three babies revealed at an inquest yesterday that two small bodies had been found hidden in a laundry basket at a house near Doncaster.

One of the babies had been dead for an estimated three weeks, but the remains of the other were up to four years old, according to South Yorkshire Police. Officers are using a radar scanning device to search for a suspected third corpse in gardens at Rossington, a coalfield village.

A mother of five, Alison Johnson, 38, has been charged with the murder last month of the first baby, a one-day-old girl, and is due to appear before Doncaster magistrates on Friday.

Detective Superintendent Derek Deakin, heading the investigation, told the inquest in Doncaster that officers searched a house in Rossington last week following information from a reliable source. He said: "The body of the first baby had been placed in a laundry basket, along with bundles of clothing, in an outbuilding at the address.

"The whole basket was taken away for further examination. When we examined the contents further, that's when we discovered baby number two."

The inquest heard that tests on the baby girl's body suggested that the child had been born alive at full term. Doctors are now carrying out further checks to discover the identity of the child's parents.

Mr Deakin said: "We have spoken to a gentleman who thinks he may be the father but the only way to confirm this is by forensic examination of the DNA profile."

Pathologists are still working to determine the sex of the second baby and whether it was also born alive.

The Doncaster coroner, Stanley Hooper, adjourned the inquest pending further information, as officers began to dig up sections of garden at three houses in Rossington. Sniffer dogs are being used along with a radar device and fibre optic surveys of crevices and floor cavities in the three houses are being carried out.
Mr Deakin said: "There is a strong possibility that we will discover another body at some point and we will use everything we can to assist our search."

FULL TEXT (Article 4 of 4): A woman who killed her new-born daughter and hid the body in an outhouse alongside the mummified remains of her infant son was spared prison yesterday.

Alison Johnson, 35, had denied to her family and friends that she was pregnant but later claimed to have suffered a miscarriage.

She wrapped a towel tightly around the girl and placed her in a laundry basket which she locked in the shed outside her home.

Johnson was arrested the day after her sister, Pauline Love, reported her suspicions to police in August 2000, Sheffield Crown Court heard.

Officers who searched the outhouse in Rossington, near Doncaster, south Yorks, saw a baby's foot protruding from the towel in the basket.

When the bundle was unwrapped during a post mortem examination the "mummified body" of the other infant was found.

Robert Smith, QC, prosecuting, said pathologists believed the girl was born alive and may have been smothered or drowned. The boy had been at least 36 weeks in gestation and therefore capable of being born alive.

"Given its mummified state the baby was likely to have been born some years before. It was not possible to ascertain whether the cause of death was by natural disease," said Mr Smith.

Johnson had been described as a "good and caring mother" to her first five children and that "some psychiatric abnormality" could explain the killing.

Johnson, who was divorced from her husband, Stephen Johnson, in 1996, told police in interviews that she had become pregnant after "a one night stand with a man whose name I can now no longer recall". DNA tests on samples from the bodies showed a "high match probability" that the two were born to her by different fathers.

Johnson admitted manslaughter by negligence of her daughter and endeavouring to conceal the birth of her son.

Mr Justice Gage made her the subject of a three-year community rehabilitation order during which time she will live at a centre to undergo psychiatric treatment.