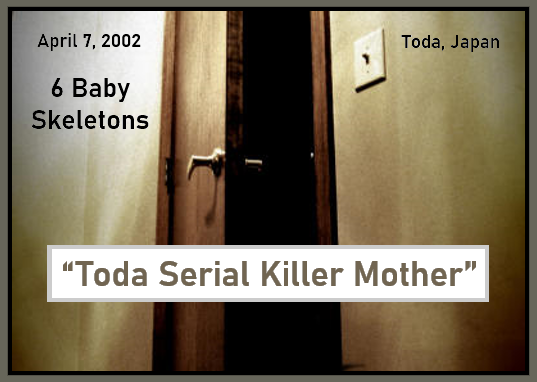 FULL TEXT: A 58-year-old woman has told police that she was the mother of six infants whose remains were found in an apartment near Tokyo on Sunday. The woman said she gave birth to the last of the babies more than 10 years ago, according to a police official in Toda, 20 kilometres (12 miles) northwest of Tokyo. Cleaners working in the apartment found six skeletons stacked on the top shelf of a closet - five were in a plastic bag and one in a plastic case, reports said. News reports said the woman's daughter and her husband had rented the apartment 12 years ago. After the daughter got divorced, the mother and a son moved in with her. The babies’ bodies were found after the son, who was the last person to live in the apartment, moved out in March and called in a cleaning service, according to television reports.

The infants were believed to be aged between six months and several years. The bodies were badly decomposed and neither the sex nor the cause of death have been confirmed by police. Japanese newspaper reports quoted neighbours who said that a couple in their 30s had lived in the apartment and were later joined by the wife's mother and younger brother. However, the renting agency later demanded that their agreement be cancelled as they were behind on rent, reports said.

FULL TEXT: Tokyo - A woman told police Monday that she gave birth to six babies whose badly decomposed bodies were found in a vacant apartment outside Tokyo, police said. The 58-year-old woman, whose daughter had been renting the apartment, said she delivered the last of the babies more than 10 years ago, local police official Kazuhiko Nakanishi said. Housekeepers found the bodies, five in plastic bags, in a closet on Sunday afternoon. The apartment is located in Toda, a city 20km north-west of Tokyo. Police were questioning the woman, whose name was being withheld. It was not clear if she killed the babies or why she kept the bodies for more than a decade, said Nakanishi, who declined to provide further details.

News reports said the woman's daughter began renting the apartment 12 years ago with her husband. After the couple divorced, the mother and her son moved in with the younger woman. The dead babies were discovered when the son, the last person to live in the apartment, moved out and called in a cleaning service, television news reports said. Five of the babies were wrapped in transparent bags and one was enclosed in a plastic case, police said. 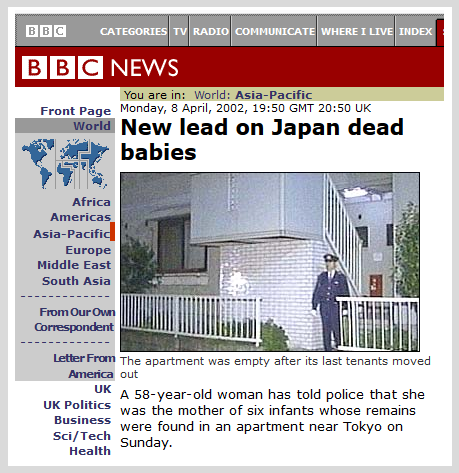