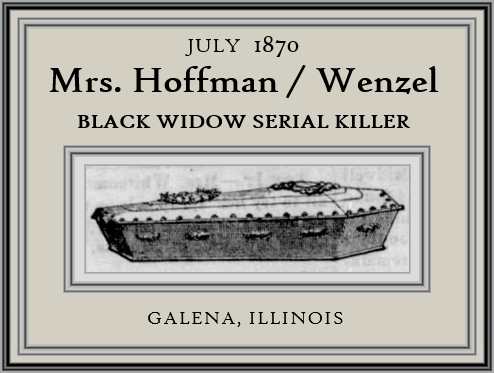 FULL TEXT: We mentioned a few days ago the death of Ms. Wenzel, better known as “Mrs. Hoffman,” who committed suicide by poisoning. We also stated that there was little doubt that she had previously poisoned her step-daughter to death, and had made attempts on the life of her husband, who was lying ill at the time of her death.

More light has been thrown upon the case by the death of her husband. Mr. John Wenzel, which took place at his residence near this city, last Tuesday evening, Dr. A. Weirich, who attended him, informs us that Mr. Wenzel unquestionably died from the effects of poison.

The circumstances, some of which we have previously related, are as follows: Mrs. Hoffman, a widow of bad repute, who had buried two husbands, was married four months ago to Mr. Wenzel. She soon took bitter dislike to Wenzel’s little daughter, about eight years old, who was living with them, and some two months ago the child died, evidently from the effects of poison. After the death of the child, the woman manifested a bitter hatred for her husband, and the couple lived together wretchedly unhappy. Wenzel told his former partner in the mining business that she was making his life miserable, and he very much regretted that he had married her. About six weeks ago, Wenzel, who had hardly seen a sick day before, was taken very ill with purging, vomiting, and cramps in the stomach, exhibiting all the symptoms of poisoning. As his wife showed him but little attention during his sickness, she was told by a neighbor that she had better “doctor the old man up,” and get him well, for if he died she would be arrested for poisoning him. He continued ill, however, and expressed his belief that his wife had given him poison. He showed to his neighbors the cup from which were grains of white powder – doubtless strychnine. These revelations apparently troubled Mrs. Wenzel, and she was soon taken ill with symptoms similar to those exhibited by her husband. When visited by the physician, she seemed reluctant to take medicine, and expressed a desire to die. She partially recovered, however. On the 11th inst., she was again taken in the same manner, and died that that night. The paper of strychnine which was afterwards found partially buried, left no doubt that she died from a dose of poison administered by herself. Mr. Wenzel lingered eight days after her death, apparently dying from the effects of poison in the system, and finally expired on Tuesday evening. His body was very much swollen.

The large does which the woman administered produced vomiting and purging, and it is doubtless owing to this fact that the victims survived the first attack. Thus this fiend in human form poisoned a step-daughter, a husband and herself. It is now stated by those who are acquainted with the circumstances of the death of her other two husbands, that their symptoms were similar to those of the last one, and it is believed that they were poisoned. We doubt if another such female poisoner has lived since the days of Lucretia Borgia. 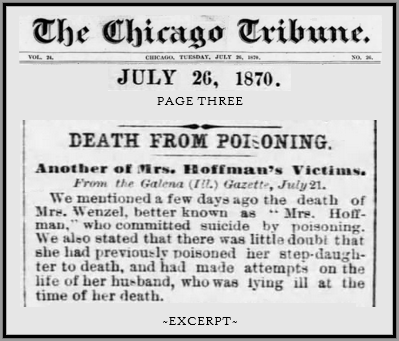