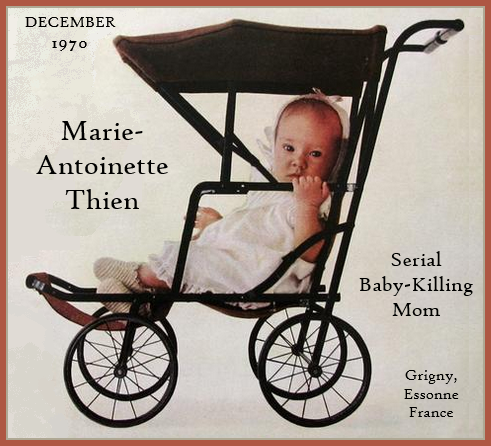 FULL TEXT: Paris – President Georges Pompidou is thinking about pardoning a woman who with her husband killed five of their newborn babies so their other three children could have a better life.

Pompidou said last week he was considering clemency for Marie-Antoinette Thien, 38, who was sentenced in December [1970] to five years in prison. Her husband, Rene, 43, a factory worker, got 10 years.

The jurors who convicted the Thiens wrote Poimpidou that the three remaining children – Gabriel, 17, Marie-Claude, 15, and Eric, 22 months – needed their mother.

The couple grew up in poverty and in recent years lived in an isolated neighborhood near Gigny, in the Rhone valley.

Social workers investigated after getting reports that Mrs. Thien had been pregnant considerably more times than there were Thien children growing up. Remains of three infants were found buried in the garden.

The mother told the nine men on the jury – all fathers – that she and her husband killed five babies “in order to give happiness to the older ones, so they would not have a childhood like ours.

After the trial the jurors worried about the surviving children, who had been sent to live with other families. They talked with Gabriel and Marie-Claude, then wrote to Pompidou urging clemency for the mother.

“We don’t disavow the verdict,” they said. “. . . Our initiative aims only . . . at avoiding the addition of indirect – pitiable – victims to all that has already happened.”

“The family lived completely isolated, without any news or information of any kind,” said one juror. “If they had only known about abortion.”