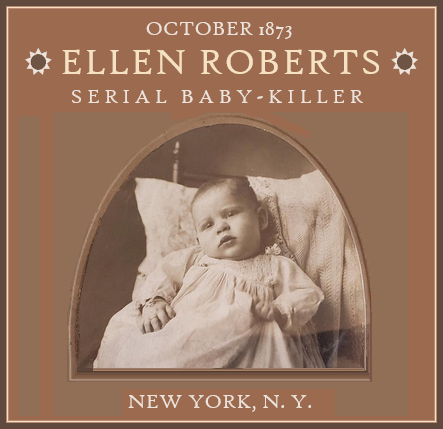 One of the complainants swears that she resided on the same floor with Mrs. Roberts from the 1st of January last to June 21st, and that during that time more than thirty of the infants died. Another witness swears that Mr. Roberts is drunk nearly all the time, and that on one occasion two babes nearly suffocated by her while in this condition. It is also alleged that several infants who died on her hands were kept for days in the stable of an undertaker named Boylston, on the opposite of the street, and removed in a mysterious manner. Mrs. Roberts has no babes in her charge at present. The last one she nursed was taken from her by Captain Allaire and Dr. Wooster Beach, for the reason that the neighbors complained that it was starving to death. The accused appears to be but little affected by the terrible charges brought against her, and claims her ability to disprove them all when accorded an examination. She is the mother of five children.

FULL TEXT: Reference was made yesterday to the operation of Mrs. Roberts, a baby farmer, and in the description of her methods of increasing the mortality reports, allusion was made to an undertaker, whose name, by the way, is Boylston, and exceedingly suggestive of the old hymn, beginning “Our days are as the “grass.” It is due to Mr. Boylston to say that he claims not to have had a monopoly of Mrs. Roberts’s patronage. He says he had only buried nine infants from this house, and for these he had certificates and burial permits. The question seems to be quite in order why the Health Bureau does not make some special inquiry into such peculiar facts as nine young children being buried from one house in New York, and that house not a hospital? And why should Mrs. Roberts divide her medical custom with Drs. Smith, Chambers and Cybert? In this business so common in New York that the Health Board winks at it and physicians maintain silence?

FULL TEXT: Mrs. Roberts, the alleged baby farmer, will be further examined to-day. Yesterday Dr. Harris, of the Board of Health, presented certificates of eleven deaths issued from the office for infants who died where Mrs. Roberts lived. Mrs. Thylfe testified to Mrs. Robert’s [sic] frequent and helpless drunkenness, that she had twelve children in her care the latter part of May, and the witness knew of fifteen having died there. She testified that eight had been taken away by Mr. Boylston, the undertaker.