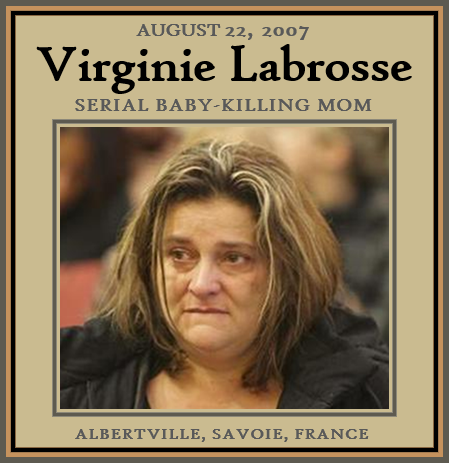 Ms Labrosse, a cleaning lady at the town hall of Albertville in the French Alps, risks a life sentence.

Two of the three babies were discovered by Ms Labrosse's companion of the last 16 years, Philippe Viguet-Poupelloz (40), a plumber.

Last year the couple moved into a chalet they had built on the heights above the ski resort.

However, they decided to separate, and Mr Viguet-Poupelloz had returned to the house to collect his belongings when he noticed a foul smell in the basement storage area.

Mr Viguet-Poupelloz opened a green, military-style metal trunk and found two babies, one male, the other female, in a nylon bag next to a set of bowling balls. He ran to the next-door neighbour, Eraldo Anselmo (87), and said: "Come quickly. Come quickly."

"He was overwhelmed," the neighbour recounted.

Mr Viguet-Poupelloz called the police and Ms Labrosse - without telling her what he had found. The police were already there when she arrived. "She sat down. She was very calm and she told the police, 'They're mine'," Mr Anselmo said.

Ms Labrosse alerted the police to the presence of a third baby, stored next to a plastic Christmas tree.

The babies were born in 2001, 2003 and 2006. Mr Viguet-Poupelloz was serving a seven-month sentence for sexually assaulting a hitch-hiker when the first child was born.

"She explained that she didn't want to admit she was pregnant, and since she didn't gain weight, neither her companion nor her family noticed anything," the prosecutor of Albertville, Henry-Michel Perret, told a press conference.

Ms Labrosse said the three infants were Mr Viguet-Poupelloz's, but he knew nothing about them. He was held overnight and freed yesterday morning.

Ms Labrosse is undergoing psychiatric examination. Autopsies of the bodies will determine the cause of death and whether Mr Viguet-Poupelloz was the father.

The prosecutor said it was not clear whether Ms Labrosse killed the babies, or simply let them die.

When the couple moved into their new house in 2006, Ms Labrosse brought the first two bodies with her. She kept them in the freezer when her companion was away, but hid them elsewhere when he returned home. Because they were repeatedly frozen and refrozen, two of the three bodies were well preserved.

On October 18, 2010 Virginie Labrosse is found guilty by the Assize Court of Savoy in Chambéry for "neglect followed by death" to her first child, "attempted murder" for the second and the "murder" of the third. Sentenced to 5 years. 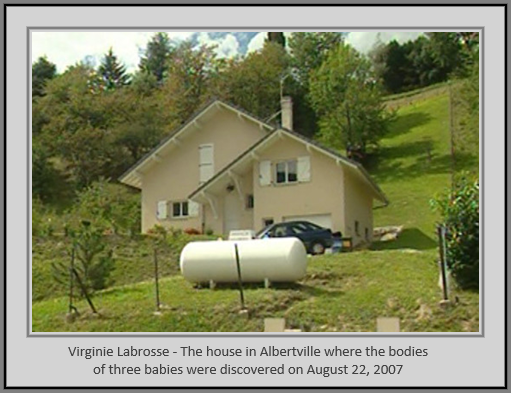 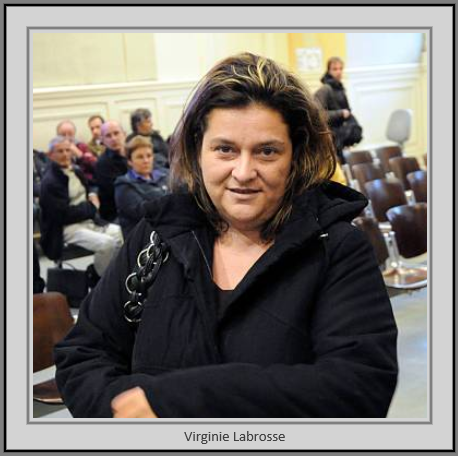 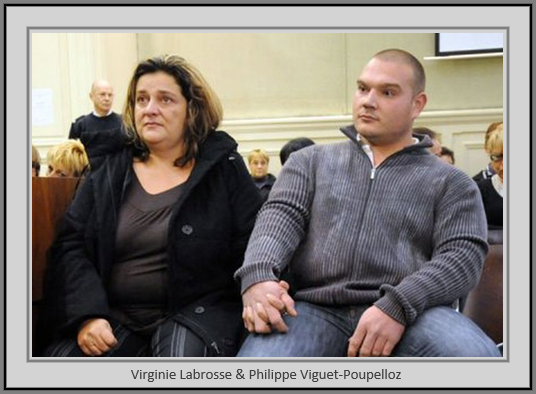