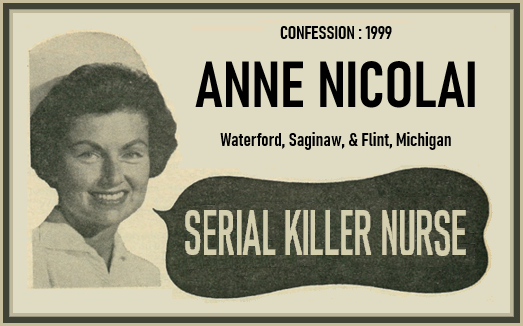 FULL TEXT: Oakland County prosecutors are awaiting a judge’s decision as to whether they can exhume the body of a woman who died in 1996 after a nurse says she gave her too much morphine.

A judge is to rule on their request next month.

The prosecutors want the body exhumed to see if there is evidence to charge Anne Nicolai, 37, with a crime.

The first patient was a 95-year-old resident at Standish Home for the elderly in Waterford. She was terminally ill and Nicolai gave her too many doses of Roxanol in July 1996, the nurse told police.

The second woman was a 67-year-old patient at St. Luke’s Hospital in Saginaw. She was diabetic and struggled with emphysema. After she died, her family had her cremated.

Nicolai told Michigan State Police she ignored prescribed doses of morphine and knew an increased dose would kill them.

The Michigan Department of Consumer and Industry Services suspended Nicolai’s nursing license until an Aug. 10 hearing.

“It’s the most unusual case I’ve seen,” Lori Donlan, a CIS spokesman, told the Flint Journal for a story Thursday.

She said it’s the first time Michigan has suspended a nurse for a suspected mercy killing.

But, Nicolai – who worked for a nursing agency that sent her to hospitals, nursing homes and patients’ homes – cannot be criminally charged until police have sufficient evidence that a crime was committed.

Flint police are also investigating a third death of a woman who Nicolai cared for at home in 1996.

The 80-year-old had cancer and Nicolai gave her pain medication after she fell, the elderly woman’s family told Flint police Sgt. Chris Curnow.

The Genesee County Prosecutor’s office would decide whether to exhume that body.

The cases came to light after Nicolai told a boyfriend about the deaths, Muir said. The boyfriend told a local minister, who notified police in October 1999.

Michigan has struggled with the issue of euthanasia since Dr. Jack Kervorkian began assisting with the deaths of terminally ill patients. The deaths possibly linked to Nicolai, however, are different, Muir said.

“Kervorkian’s patients knew the end was near and asked for him,” Muir said. “These people had no idea what was coming.”

***
FULL TEXT: Prosecutors are weighing whether to charge a nurse who authorities say admitted giving lethal doses of medicine to three elderly patients including a 95-year-old woman whose 1996 death in a Waterford elder-care home was recently reclassified a homicide.

Oakland County Prosecutor David Gorcyca said the decision hinges on registered nurse Anne Nicolai's mental state and the statements of witnesses, including a former colleague who moved out of state.

Charges against Nicolai, 37, of Davison would bring to a head an investigation that began in the. summer of 1999, when a boyfriend she told about the deaths confided in a minister who alerted police.

The state Department of Consumer and Industry Services later revoked her nursing license. She also told state officials she had been hospitalized several times for psychiatric treatment and diagnosed with bipolar disorder, de; pression and post-traumatic stress disorder.

Given her possible mental disorder, "what credibility and veracity do you give those statements?" Gorcyca said Wednesday. "We're going to have to decipher all that out."

Oakland County Medical Examiner L.J. Dragovic's recent decision to call Marie Waiting's death a homicide came after her body was exhumed from a Pontiac cemetery as part of the investigation.

Nicolai told authorities she gave a double dose of morphine to Walling, sensing she was in pain as she neared death at the Stan- dish Home for the Elderly in Waterford. At the time, Nicolai worked for Samaritan Care Hospice of Southfield.

Dragovic, who amended Walling's death certificate to say Walling died by morphine poisoning, was out of town Wednesday and unavailable for comment.

Medical ethicists say the case delves into an unsettled area of medicine in American society: Are people willing to accept aggressive pain control for the terminally ill, even if the methods hasten death?

Nicolai also admitted overmedicating a 67-year-old emphysema patient at a Saginaw hospital in
1997, but Michigan State Police said Wednesday that an investigation was dropped because the woman’s body cremated.

Nicolai’s lawyer, James Burdick, denied that her statements to police and others were admissions of guilt, but lamentations about her role in easing the pain of patients in their final hours.

It’s a hospice nurse’s duty to “find the level that will make the pain go away,” Burdick said Wednesday.

“Aggressive maintenance of pain at the end of life is crucial … so that death is more bearable. It’s not only legal but ethical, but it’s what hospice is all about.

They’ll likely have to prove that Nicolai intended death rather than pain relief, he said, and whether the three deaths constitute a troubling pattern.

“Three deaths over two years wouldn’t necessarily indicate a pattern, if she’s dealing with dying patients and there’s a lot of medication going around,” said Caplan, who directs the university’s Center for Bioethics.

“What we haven’t yet said, as a society, is if in the pursuit of pain control, do we accept the risk of death?”

Gorcyca acknowledged the validity of those questions and declined to speculate on potential charges.