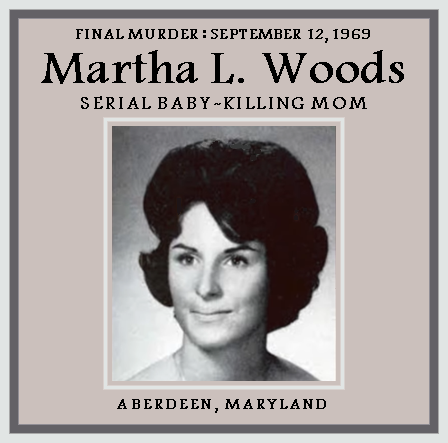 FULL TEXT: Martha Woods, a dutiful Army wife that followed her husband to every military base he was stationed at, was a female killer that suffered from Munchausen’s Syndrome by Proxy. A rare disease typically affecting women, Munchausen’s Syndrome by Proxy drives its victims to seek attention or sympathy by fabricating illnesses or causing deliberate harm to their loved ones. From 1946 to 1969, Woods accrued victims that included three of her own children, a nephew and niece, a neighbor’s child, and an adopted son.

Her pattern commonly involved rushing to the hospital with an unconscious baby that had curiously stopped breathing while alone in Woods’ care, consequently suffering more attacks after being sent home. Although the children’s symptoms were consistent with deliberate strangulation, because of the frequency with which the family relocated, the authorities never once connected the twenty-seven severe respiratory attacks, and six of the seven deaths that Woods caused were listed as natural.

As another symptom of Munchausen’s by Proxy, Woods was also a skilled pathological liar, complaining of threats from the biological parents of an adopted daughter, who, as Woods claimed, threatened her life when she refused to release custody of the girl. The police officers who investigated Woods’ allegations dismissed the case as a hoax, however, and no charges were brought forth against the parents who were found to be living in a different state.

After the death of her seven-month-old adopted son in Baltimore, Maryland turned up suspicious evidence against Woods, the authorities finally discovered the pattern linking the deaths of all the other children, and they conducted intensive psychiatric testing that found her sane and fit for a trial. Following five months of testimony, which included the evidence surrounding the previous deaths, Martha Woods was convicted of first-degree murder and sentenced to life imprisonment.

An Army wife who followed her husband around the country from one military base to the next, Martha Woods also suffered from the bizarre mental illness dubbed Munchausen’s syndrome by proxy.

Victims of this rare condition are driven to seek attention or sympathy by fabricating ailments for their loved ones, sometimes inflicting deliberate harm to support their claims of mysterious illness. In this case, the quirk cost seven children their lives.

Martha’s victims included three of her own children, a nephew, a niece, a neighbor’s child, and the son she adopted when targets grew scarce.

The cross-country killing spree lasted for most of a quarter-century, from 1946 to 1969. Geography was Martha’s friend, preventing medical practitioners in various locations from comparing notes and thus connecting her sequential crimes, until her luck ran out at last in Baltimore.

Martha’s pattern was always the same, involving a rush to the nearest hospital with an unconscious baby in her arms. Each time, the infant was alone in Martha’s care when it abruptly, inexplicably stopped breathing.

The children were revived, sent home with Woods, but they inevitably suffered more attacks within a span of hours or days. Altogether, police calculated in hindsight, nine children had suffered a total of twenty-seven life-threatening respiratory attacks, with seven resulting in death.

The first six deaths were listed as natural, though symptoms were consistent with deliberate suffocation. Aside from her penchant for smothering infants, Woods also displayed the typical Munchausen’s trait of pathological lying. Following the adoption of daughter Judy, she complained of threats from the girl’s biological parents.

They had turned up on her doorstep, Martha claimed, demanding their daughter back, threatening her life when she refused. Faceless strangers were circling her home in a car at odd hours, and someone had tried to burn the house.

In fact, Army CID agents found flammable liquid splashed on one wall of Martha’s home, but they suspected her of staging the scene herself. Judy’s actual parents were miles away, in another state, and officers finally dismissed the whole story as an elaborate hoax.

Time ran out for Woods in Baltimore, when authorities finally turned up evidence of murder in the death of her adopted son, seven-month-old Paul. Intensive psychiatric testing found her sane and fit for trial.

The judge admitted evidence from other deaths to prove the case on Paul, and Martha was convicted after five months of testimony, sentenced to life imprisonment on one count of first-degree murder. 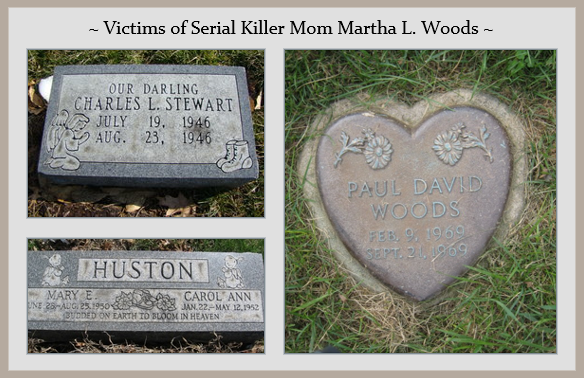 1) Judy Woods
Judy was adopted by defendant and her husband, and while under the age of two, had at least six episodes of blueness and breathing difficulties. Two episodes occurred on December 12, 1967, and Judy was hospitalized for six days. Another occurred March 22, 1968, and another on February 10, 1969. On March 16, 1969, Judy turned blue but responded to mouth-to-mouth resuscitation. On September 9, 1969, there was another episode and Judy was admitted to Kirk Army Hospital and later The Johns Hopkins Hospital. During no hospitalization, nor as a result of any other medical examination or test, was any cause for cyanosis and breathing difficulties discovered. On each occasion that Judy experienced cyanosis she was alone with defendant. When Judy was removed from defendant's custody after her last discharge from the hospital, she never again suffered from any type of cyanotic condition.

2) Charles Lewis Stewart
Charles was defendant's first natural child and although born prematurely in 1946, was born without congenital malformation. When he was one month old, he experienced two episodes of cyanosis while being held in defendant's arms. When taken to the hospital, Charles appeared to be in no apparent distress and his hospital course was normal. Two days after he was released from the hospital, he died after an episode of coughing, choking, and turning blue. Although defendant presented alibi evidence to show that she was not present when he died, the government's proof was to the contrary. The cause of death listed on the death certificate ("enlarged thymus" and "status lymphaticus") was shown to have been a medical impossibility.
3) Mary Elizabeth Huston
Mary was defendant's second born natural child and she was born in 1950. She died at the age of one month and twenty-seven days. Born prematurely, she spent the first three weeks of her life in a hospital and upon her release to defendant's care, she suffered four or five episodes of cyanosis at times when Mary was alone with her mother or in her care. She was hospitalized twice, and no medical reason for her cyanosis could be discovered. Her death occurred while she was in defendant's arms. The causes of death listed on her death certificate ("asphyxiation due to a mucous plug" and "patent foramen ovale") were shown to have been medically impossible or extremely unlikely.
4) Carol Ann Huston
Carol was the defendant's third natural child. She was born January 22, 1952, and died at the age of three months and twenty-one days. She was shown to be a normal, healthy baby, but she experienced cyanosis on the day of her death when she was in the care and custody of her mother. The government's evidence showed that the cause of death listed on her death certificate ("epiglossitis" and "bronchopneumonia") must have been diagnosed after death without an autopsy and that the diagnosis was medically impossible under these circumstances.
5) John Wise
John was defendant's nephew who died December 26, 1946, at the age of three years and seven months and who was suffering from diphtheria at the time of his death. The government's evidence was that John died while he was in bed with the defendant and that three other children from the home who also suffered from diphtheria all survived.
6) Lilly Marie Stewart
Lilly was defendant's niece who died May 18, 1958, at the age of fourteen months. The child's parents awoke one night to find the child in defendant's arms making a gurgling noise and appearing to be blue around the mouth. When rushed to the hospital, she was dead on arrival. No autopsy was performed.
7) Eddie Thomas
Eddie, an eighteen-month-old child, and his seven or eight-year-old brother, David, were left with defendant while the mother visited her husband in the hospital. Eddie experienced cyanosis and was taken to the hospital. There he appeared well and was released. His mother observed a bruise on his neck when she bathed him later in the day. Defendant conceded that she had been alone with Eddie when he experienced breathing difficulties. Her explanation of the cause of the difficulty, i.e., a mucous block, was shown to have been a medical impossibility.
8) Marlan Rash
Marlan was a child of a friend, who died on May 3, 1964, at the age of eighteen months. During the last five months of his life, he suffered three cyanotic attacks while in defendant's care. After the first attack he was hospitalized five days and suffered no seizures while in the hospital. An initial diagnosis of epilepsy was made. The second episode occurred four months later and he was again hospitalized. The third episode occurred on the day he was released from the hospital from the second episode, and the child died. An autopsy failed to reveal a cause of death. The preliminary diagnosis of epilepsy was largely disproved.
***

The penalties were imposed by Judge Frank A. Kaufman in Federal Court where Mrs. Woods, now of Aberdeen, was convicted by a jury after a trial that lasted nearly 45 days.

The infant boy died at Johns Hopkins Hospital in August, 1969, after he was rushed there by the defendant, who reported the baby was having a “breathing spell.”

The trial was in the Federal Court because the crime occurred at the Arm’s Aberdeen Proving Ground.

Mrs. Woods was embraced by her husband, and Army sergeant, as she stood before Judge Kaufman for sentencing and she sobbed profusely after the prison terms were imposed. She insisted she is innocent of smothering the child.

Robert E. Cahill, the court-appointed defense counsel, asked the judge to inform the parole board that Mrs. Woods would be eligible for parole at any time, under terms of a federal statute, but the judge declined, saying he doubted he had that authority in the life-imprisonment case.

Charles G. Bernstein, the prosecutor, opposed the request that would have made the defendant eligible for parole at any time, under terms of a federal statute, but the judge declined, saying he doubted her had that authority in the life-imprisonment case.

Charles G. Bernstein, the prosecutor, opposed the request that would have made the defendant eligible for parole before serving 15 years of the life term.

Judge Kaufman said he would exercise his discretion in recommending early parole on the 75-year concurrent term. He also said he would consider such a recommendation with regard to the life term if a higher court, on appeal, ruled he had the discretion to do so.

Mr. Cahill contended there was overwhelming evidence of the woman’s mental illness and said no motive was shown for the killing.

Mrs. Woods told the judge, “I did not hurt the child.” “If I did not want the child I would not have gone and gotten him” she added.

Judge Kaufman cited the problems involved in deciding on a sentence to be imposed, but said he agreed with the prosecutor that “society must be protected.”

He said he hoped that “during the years ahead the doctors and or others will find it poossible to discover why these acts were committed and will be able to treat or through other methods take such steps to insure they will not occur again.”

Mr. Bernstein produced evidence during the trial that since 1946 Mrs. Woods had been involved with six or eight normal children who were said to suffer suddenly from a lack of oxygen.

The jurors were told that three of her own children died in infancy, that she was present when a niece and a nephew died in infancy and had reported finding neighbors’ children who had stopped breathing.

In addition to the murder charge, Mrs. Woods also was convicted of attempted murder, assault and child-abuse counts involving other breathing episodes with Paul. Originally, she also had been charged with attempting to murder her year-old adopted daughter, Judy, but Judge Kaufman dismissed those counts. 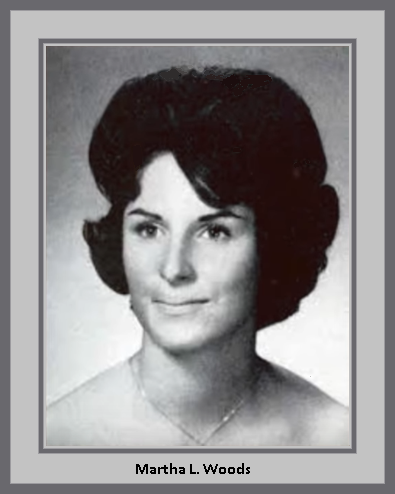 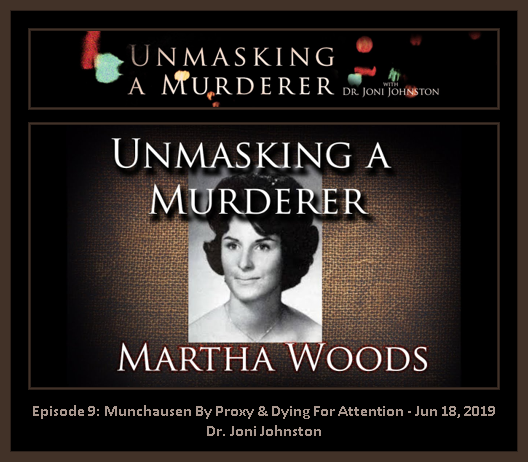