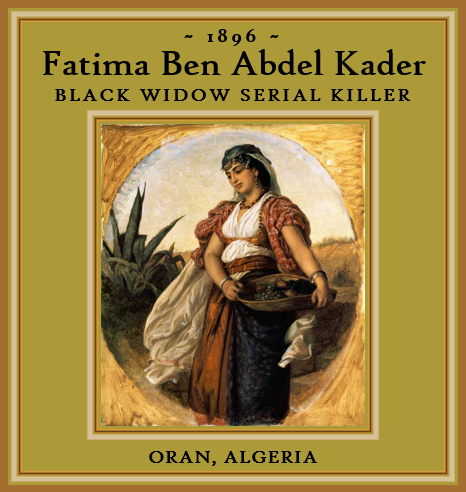 FULL TEXT: It is a good thing that Fatima Ben Abdel Kader has been consigned to prison, for she is a terrible man-killer in every sense of the word. She is only an Algerian beauty, not yet forty; but she has already had seven husbands. Her first marriage ended abruptly and early in a divorce. She shot her husband in a fit of jealousy, and the Algerian Judges, finding some extenuating circumstances in the matter, only gave her five years’ imprisonment for the offence. As soon as Fatima was liberated she married a marabout [Muslim teacher], who avenged his predecessors by nearly killing her. Him she deserted ten years ago. Since that event she has marred four times, and had murdered, or caused to be murdered, two of her later husbands and one of her children. As this adventurous widow is reported to be “of ravishing beauty,” it is pleasant to hear that for twenty years to come she will pine in prison at Oran. When she comes forth she will be sixty, and, so far as my recollection goes, no Algerian woman of that age is in the smallest degree “dangerous” in the sense in which that profound philosopher, the elder Weller, applied the word to widows.