FULL TEXT (Article 1 of 2): The number of inmates at the “baby farm” at No. 2812 Calumet avenue, operated by Mrs. Annie Hanson, or rather Mrs. Annie Doyle, for she has not been divorced from James Doyle, a traveler for a stock-yards firm, was depleted yesterday afternoon, two of its sickly infantile plants being removed to St. Luke’s Hospital. Oscar E. Little and George Nolan of the Illinois Humane Society transported little Hazel and Mabel, and it was well they did, for life had but a feeble holds on the infants. The doctors at the hospital think five-weeks-old Mabel may live, but the spark of life is feeble.

Shortly after 3 o’clock in the afternoon  the Humane officers and a reporter for The Tribune entered the house. Mrs. Amelie Brown, who with her little daughter Edna has been living with Mrs. Hanson since last August, had her hands full during the morning attending to the wants of the little ones. Experienced as are agents of the Humane Society in handling children, they called on Mrs. Brown for assistance ands she responded. Two rooms of the basement were ransacked for heavy wraps and tenderly the little ones were bundled up, for the wind was cold and they had been existing in a veritable hothouse. But the babes were hungry and then ensued a scene which had its ludicrous side.

Officer A. B. Smith, big as many men on the force, know what they wanted when their piping falsetto rang sharply out. He went on a hunt for feeding bottles and milk and found both. Then he proved himself a married man, for before the milk was handed over to Humane Officer Little he warmed the bottle and its contents in a kettle of boiling water. 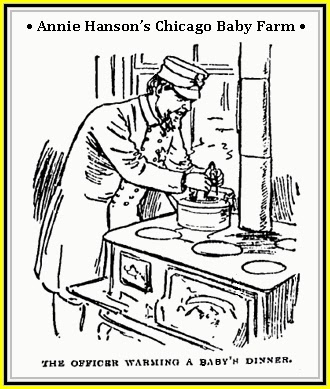 Daylight adds  no charms to the den where Mrs. Hanson has been carrying on her business. In fact it showed more strongly the horrors of the place, particularly of the closet where little ones have been kept. A little over six feet in length, barely four feet in width, with a low ceiling and one small window, it for the last two months has been the home of three babies and at other times has held twice that number. But its minute confines are not the worst feature. Mrs. Hanson evidently went on the principle that children were like exotics – needed to be kept in a hothouse. At one end of the closet four stove-pipes leading from a big furnace in the hall pass through the walls in various directions, producing a temperature almost suffocating to a grown person. The effect of the heat was plainly visible on the faces of the little ones.

Entrance to the street is obtained through the rear room or kitchen. And the kitchen was a sight to behold. On the floor were a few rag dolls, dirty and filthy. A shelf was liberally decorated with bottles labeled “castor oil” and “parygoric,” the former being largely in the majority. Half a dozen clothes lines were stretched from wall to wall, and held enough garments to clothe twenty babies. The clothes were not of fine linen or silk, decidedly the reverse, being ragged and torn. Feeding bottles, some whole and some broken, were piled in a heap in one corner. The room was dirty and the atmosphere of a character inimical to health.

~ Did a Thriving Business. ~

But the front room told more plainly the business Mrs. Hanson had been engaged in. babies were everywhere; not real live babies, but pictures of these little bits of humanity. And they were nearly all in long clothes. Some were large and encircled by gilt frames hung upon the walls. There were five of these. On the mantel shelf were several cabinet-sized photos of well-dressed little ones, and scattered around on tables in open trunks were others. A photograph album lay on a trunk. It did not contain many pictures, but between the torn leaves were several letters that are decidedly interesting. They show that Mrs. Hanson’s business was a thriving one, and that it was not confined to the City of Chicago nor the State of Illinois. The most interesting document perhaps was a bill showing the account between Mrs. Hanson and Lizzie Young, the mother of Hazel. It is as follows:

The handwriting is not that of Mrs. Hanson. It is fill, round, and legible, and bears no

In a copy of the letter given above the writer’s name is indicated by initials and the exact number of the house is not given, although in full in the letter itself. Another note from the burdened mother of a 5 month old boy reads: 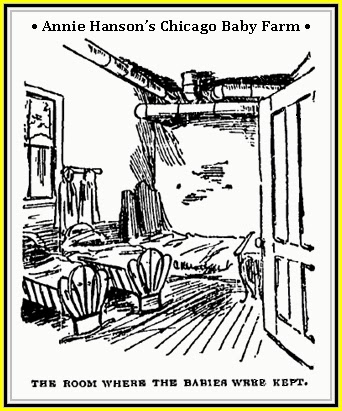 ~ Her Frame Reached to Iowa. ~

Another scrap, of paper had the office and residence addresses of five “doctoress.”

Mrs. Amelia Brown, who declares she is going to leave the place as soon as she can, gave additional details yesterday afternoon that throw light on the business conducted in that dingy basement.

“I had no idea that she was disposing of children in the manner charged,” she said. “I think that Hazel’s mother, Miss Young, will take her child to the hospital. When she brought the child here she said she didn’t want to see it again because it almost broke her heart to know that she could not keep it. A woman took Hazel away for several weeks, but brought her back a month ago sick with the croup. Mabel’s mother said she was employed as a first-class cook, and seemed to have lots of money. She has been to see her child twice since it has been here. Little Johnny, who died yesterday, and Mary and Annie all came in November. Mary, Mrs. Hanson told me, was adopted by a doctor in South Chicago, and Annie, so she said, was taken away by a woman.” 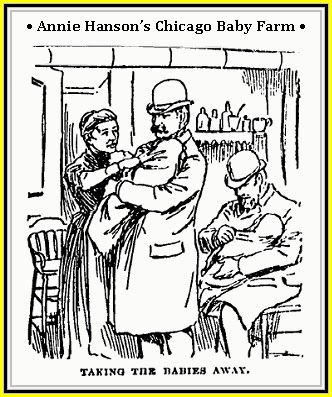 Mrs. Hanson was “not at home” to reporters at the Harrison Street Police Station yesterday, the authorities declining to allow her to be seen. They think she has talked enough already, and want her to tell her story at the inquest over little Johnny Brown’s body this morning. But Mrs. Hanson had a talk with Lieut. Healy and practically admitted that her story of the death of the child and its subsequent burial was a myth. Last night, however, in conversation with the matron she reiterated the statement that she had given the child to a man, to take to the Home for the Friendless. She said she had done nothing wrong and had nothing of which to be ashamed.

Mrs. Fanny Brown, mother of the dead child, was released from her cell long enough during the morning to visit St. Vincent’s Hospital, where she identified the little one as her own. Her testimony will be the most important at the inquest.

Lieut. Healy hinted yesterday that two South Side physicians had been engaged with Mrs. Hanson in the operation of her farm, and also stated that several midwives in the neighborhood doubtless had been aiding her.

When Mrs. Hanson was arrested Sunday afternoon she told Lieut. Healy that others were in the same business as herself, boarding babies, and mentioned a Mrs. Burke, No. 3121 Wentworth avenue, as being one of whom she knew. It seems that Mrs. Hanson and Mrs. Burke were friends, Mrs. Amelia Brown, Mrs. Hanson’s boarder, saying yesterday afternoon that Mrs. Burke was a frequent visitor to 2812 Calumet avenue.

A reporter for The Tribune called at Mrs. Burke’s residence yesterday afternoon and inquired if he could obtain board for a baby six weeks old.

“How much a week do you charge?”

“Isn’t that a little high?”

It was conceded that a special cow on the spot was worth the extra dollar, and then the question of the adoption of the baby was taken up.

“It’s a little bit difficult to get homes for children,” said Mrs. Burke. “Before I was married I sometimes did so, but the majority of children I took care of were from the Children’s Aid Society, and of course I could not dispose of them.

Mrs. Burke has three little boarders now, and as far as could be seen confined to her bed with the grip, and hired a nurse to look after the little ones, and the woman was rocking cradles when the reporter called yesterday afternoon.

[“Baby Farm Victims. What Investigation of Mrs. Hanson’s Place Reveals.- It Is A House Of Death. – Two of the Infants May Not Survive Their Treatment. – Mrs. Hanson’s Statements. – She Contradicts Herself in Talking of the Child That Died. – Labors Of The Police Officers.” St. Louis Post-Dispatch (Mo.),  Jan, 5, 1892, p. 1]

FULL TEXT (Article 2 of 2): Chicago – Mrs. Annie Hanson was arrested tonight on a charge of manslaughter, it having been discovered that she runs a baby farm at 2812 Calumet avenue. Her dealings in the children traffic, it is said, are extensive.

Six babies are known to have been taken to her house during the last five months, while five dead babies have been found during the last six months within a half-mile of her place. Mrs. Hanson professed to find homes for illegitimate children, and her advertisement has been running in the daily papers for several months. The police claim to have a chain of evidence that will be sufficient to convict her of many crimes. 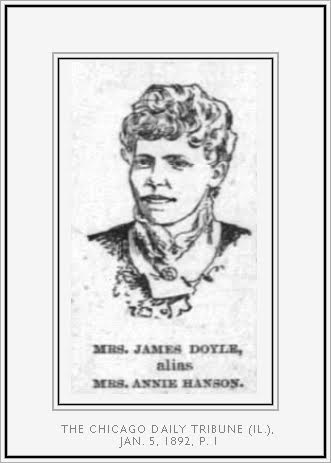