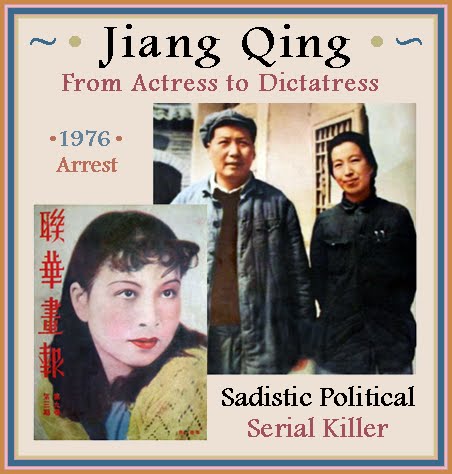 Jiang Qing (19 March 1914 – 14 May 1991), also known as Madame Mao, was a Chinese Communist Revolutionary, actress, and major political figure during the Cultural Revolution (1966–76). She was the fourth wife of Mao Zedong, the Chairman of the Communist Party and Paramount leader of China. She used the stage name Lan Ping (藍蘋) during her acting career (which ended in 1938), and was known by many other names. She married Mao in Yan'an in November 1938 and served as the inaugural "First Lady" of the People's Republic of China. Jiang Qing was best known for playing a major role in the Cultural Revolution and for forming the radical political alliance known as the "Gang of Four".

Jiang Qing incited radical youths organized as Red Guards against other senior political leaders and government officials, including Liu Shaoqi, the President at the time, and Deng Xiaoping, the Deputy Premier. Internally divided into factions both to the "left" and "right" of Jiang Qing and Mao, not all Red Guards were friendly to Jiang Qing.

Jiang's rivalry with, and personal dislike of, Zhou Enlai led Jiang to hurt Zhou where he was most vulnerable. In 1968 Jiang Qing had Zhou's adopted son (Sun Yang) and daughter (Sun Weishi) tortured and murdered by Maoist Red Guards. Sun Yang was murdered in the basement of Renmin University. After Sun Weishi died following seven months of torture in a secret prison (at Jiang's direction), Jiang made sure that Sun's body was cremated and disposed of so that no autopsy could be performed, and so that Sun's family could not have her ashes.

In 1968 Jiang forced Zhou to sign an arrest warrant for his own brother. In 1973 and 1974, Jiang directed the "Criticize Lin, Criticize Confucius" campaign against premier Zhou because Zhou was viewed as one of Jiang's primary political opponents.

When Philippines president Ferdinand Marcos and his wife Imelda visited China in 1974, Jiang Qing was said to be "extremely jealous" of the latter's flashy clothing, hair, and makeup.

In 1975, Jiang initiated a campaign named "Criticizing Song Jiang, Evaluating the Water Margin", which encouraged the use of Zhou as an example of a political loser. After Zhou Enlai died in 1976, Jiang initiated the "Five Nos" campaign in order to discourage and prohibit any public mourning for Zhou.

EXCERPT: On July 28, 1966, Jiang Qing, Mao’s wife and a key figure of the Central Cultural Revolution Group, conveyed Mao’s instruction regarding mass violence at a students’ rally: “If good people beat bad people, it serves them right; if bad people beat good people, the good people achieve glory; if good people beat good people, it is a misunderstanding; without beatings, you do not get acquainted and then no longer need to beat them.”. In other words, Mao thought the government “should turn a blind eye to violence as an inevitable by-product” of the Red Guard mobilization (Walder, 2009: 149). [Song Yongyi, Chronology of Mass Killings during the Chinese Cultural Revolution (1966-1976), 25 August, 2011]
https://www.sciencespo.fr/mass-violence-war-massacre-resistance/en/document/chronology-mass-killings-during-chinese-cultural-revolution-1966-1976

EXCERPT: Indeed, if Mr. Terrill's rendering of Jiang Qing is correct, much of the Cultural Revolution - one of the great disasters of modern Chinese history - can be explained by her willful, vindictive personality and tempestuous relationship with Mao. For her, the Cultural Revolution, during which millions of Chinese were persecuted, had no ''deep meaning'' but was only a chance for revenge on the people she felt had wronged her, dating back to the 1930's. [Fox Butterfield, Lust, Revenge And Revolution,” Book Review: The White-Boned Demon: A Biography of Madame Mao Zedong. By Ross Terrill. The New York Times, Mar. 4, 1984] 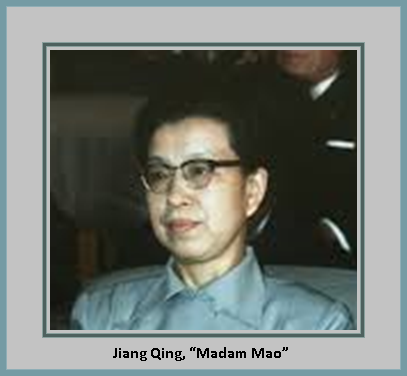