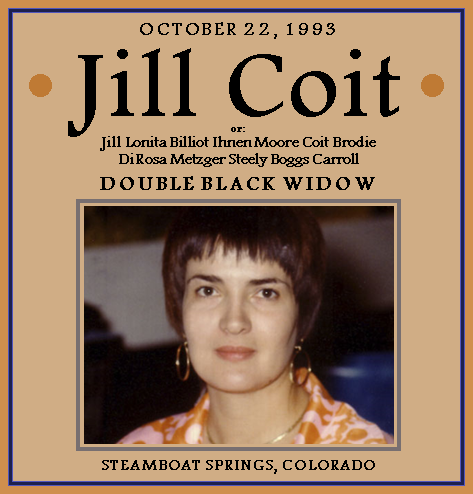 Jill Coit (born June 11, 1943 or 1944) is an American convicted murderer. A con artist and serial bigamist who has been married 11 times to nine different men, Coit was convicted of killing her eighth husband in 1993 and is also suspected of killing her third husband in 1972. Coit is serving a life sentence with no possibility of parole at the Denver Women's Correctional Facility.

Her criminal CV covers the entire gamut of gender-specific cons that she committed at the height of gender theory-inspired politics and justice, the 1970s-1990s.

Coit was born Jill Lonita Billiott in Louisiana. Her upbringing was apparently normal and without any major trauma or unusual features, and she was described as popular at her school. However, Coit did not fare well academically and dropped out of high school to marry her first husband. Less than a year later she filed for divorce and liquidated their shared bank accounts.
She married for a second time, to Steven Moore, and gave birth to a son in 1964, filing for divorce soon afterwards.

William Coit, Jr. was killed on March 29, 1972, shot twice in the back by an apparent intruder shortly after he filed for divorce from Jill. She was suspected of the murder, but the police could never find sufficient evidence to charge her. Additionally, she checked herself into a mental hospital to avoid further questioning.

Shortly after Clark's death, Jill Coit moved to California where she also persuaded an elderly gentleman to informally adopt her, and subsequently inherited "a large portion of his estate" after his death.

Coit's fourth marriage was to Donald Charles Brodie, an officer in the U.S. Marine Corps. The couple divorced in 1975 after two years of marriage. Coit later twice married and twice divorced one of the lawyers who represented her during the investigation into William Coit's murder. While separated from her fifth husband, Coit married Eldon Duane Metzger in Ohio. In 1983, she married husband number seven, a schoolteacher in Indiana.

While renovating a bed and breakfast with her sons, Coit regularly visited Gerald Boggs' hardware store in Steamboat Springs, Colorado. They struck up a relationship and in 1991 Boggs, a 52-year-old bachelor, married her, becoming (unbeknown to him) her eighth husband. Boggs' brother Doug was concerned by Coit's excessive interest in her husband's finances, and hired a private investigator, who discovered that Coit was a complete fraud: she had been married nine times, had several aliases, had been involved in various financial and insurance scams, was still married to her seventh husband, and had invented a pregnancy, having had a hysterectomy. On the basis of this information, Boggs annulled the marriage after seven months.

After the annulment, Coit and Boggs were involved in an acrimonious lawsuit over the bed and breakfast. Boggs had a substantial financial interest in the establishment that was complicated by her use of mortgage fraud, apparently to conceal her assets due to a financial judgment against her by yet another previous husband. The murder of Boggs happened shortly before the trial was scheduled to begin.

Coit briefly married husband number nine before entering into a relationship with Michael Backus, and convinced him to help her murder Boggs. In October 1993, they acted on their plot. Wearing a disguise which included a false mustache, Coit and Backus broke into Boggs's home. They beat him, shocked him with a stun gun, and ultimately murdered him using a .22 caliber pistol.

Police quickly centered on Coit as a suspect. After she confided to her younger son about the murder and asked for his help in covering it up, he instead went to the police. She was arrested in December 1993, and found guilty of first-degree murder in 1995.

She is currently serving a life sentence with no possibility of parole after all appeals were denied. She has repeatedly attempted to find a new husband via the internet.

Jun. 11, 1943 (or 1944) – Jill Lonita Billiott born, Louisiana.
July 24, 1961 – One of the young boys enamored with Jill was Larry Eugene Ihnen, and Jill was quite smitten with him too. So much was she in love with Larry, Jill dropped out of high school and the two eloped on July 24, 1961. Larry was eighteen; Jill was seventeen.
1962 – divorced.
May 5, 1964 – She marries Steven Moore, Mississippi;
Mar. 28, 1965 – gave birth to a son, filing for divorce soon afterwards.
Jan. 29, 1966 – Coit married engineer William Clark Coit, Jr. (35) in January 1966, while still legally married to Moore. The couple had two children, William Andrew Coit (called Andrew) and William Coit III. William Coit, Jr. adopted Jill's son from her previous marriage.
Mar. 8, 1972 – files for divorce.
Mar. 29, 1972 – William Coit, Jr. was killed on March 29, 1972, shot twice in the back by an apparent intruder shortly after he filed for divorce from Jill. She was suspected of the murder, but the police could never find sufficient evidence to charge her. Additionally, she checked herself into a mental hospital to avoid further questioning.
Mar. 29, 1972 – William Coit, Jr. was killed, shot twice in the back by an apparent intruder shortly after he filed for divorce.
1972 – Shortly after Clark's death, Jill Coit moved to California where she also persuaded Bruce Johansen (90s) an elderly gentleman to informally adopt her, and subsequently inherited "a large portion of his estate" after his death.
1972? – concurrent with the Johansen seduction, Jill marries U.S. Marine Corp Major Donald Charles Brodie.
Oct. 18, 1974 – After they separated, Jill come up with a scam to get money out of her soon-to-be ex. She claimed to have delivered a son on October 18, 1974, and named him Thadeus John Brodie. But the Major was smarter than the other men in Jill's past and didn't so easily believe this story; not even when Jill presented him with an infant.  Later it was learned that Jill had paid people to "borrow" their baby for a few hours and these were the infants she had used to try to squeeze child support of husband number four. Fortunately, it didn't work.
Oct. 11, 1976 – Jill marries Louis A. DiRosa, lawyer, Wilkinson County, Mississippi.
Mar. 27, 1978 – Jill meets and marries Indiana auctioneer Eldon Duane Metzger in Lima, Ohio.
Nov. 4, 1978 – Still married to Di Rosa, Jill travels to Haiti to file and is granted a divorce from Louis on Nov. 4, 1978. - a divorce not recognized by the United States; so Jill is a bigamist for a second time.
Jan. 6, 1983 – Jill marries Carl V. Steely at teacher at Culver Academy in Culver, Indiana. This invalid marriage would last for nine years, although they only lived together as man and wife for seven of those years.
Jul. 26, 1985 – couple obtained a legal divorce Louis DaRosa on Jul. 26, 1985.
Apr. 4, 1991 – Jill (41), marries 8th husband, Gerry Boggs, one of the wealthiest men in Colorado.
Dec. 3, 1991 – Gerry Boggs immediately sought an annulment that was granted.
Dec. 23, 1991 – Her marriage to Carl Steely having been discovered, Jill filed for divorce from Carl and it was finalized.
On February 7, 1992, Jill turned up like a bad penny in Las Vegas, Nevada, where she married Roy Carroll, a retired U.S. Navy Petty Officer. The couple returned to Carroll's Houston, Texas, home to begin their lives as husband and wife.
Oct. 22, 1993 – Gerald Boggs (52), murdered, Steamboat Springs, Colorado. Michael Backus, accomplice.
Dec. 23, 1993 – Jill arrested.
Mar. 17, 1995 – Hot Sulphur Springs District Court - Jill Coit (51) & Michael Backus are
convicted of first-degree murder and conspiracy to commit murder.
May 24, 1995 – Jill Coit & Michael Backus are both sentenced to life in prison without parole and each is levied a fine of $1 million dollars so that neither can profit from their life stories.
Nov. 29 1997 – Jill Coit appeals her life sentence. The appeal is denied. Jill Coit is 54.
May 22, 1998 – Jill Coit has someone post an advertisement on the Internet for her. She
advertises for a husband.  The Colorado Women's Correctional Institute has the ad shut down.
Dec. 1998 – Jill Coit again advertises on the Internet "Want U.S. Citizenship? Marry an
inmate" on a website "Cyberspace-Inmates.com" The Dept. of Immigration & Naturalization shuts the site down.
Aug. 6 - 2001 – Colorado Supreme Court - Jill Coit's Petition for Writ of Certiorari is denied.
May 9, 2002 – Routt County District Court - Jill Coit Backus files a motion for post-conviction relief of her charges. Her motion is denied.  Jill is 58.
Oct. 27, 2002 – Jill Coit has an appeal to the people of Colorado posted online. She called for an investigation into abuse and human rights violations against her that have occurred in jail. Jill reports that she has been denied use of her therapeutic braces for her back and both hands for arthritis. She also alleges that she was sexually abused and had her finger broken by a guard.
Dec. 19, 2005 – United States District Court for the District of Colorado - Jill Coit filed a Montez Claim.
Apr. 7, 2006 – United Sates Court of Appeals for the Tenth Circuit - Jill Coit-Backus files suit against Correctional Officers. 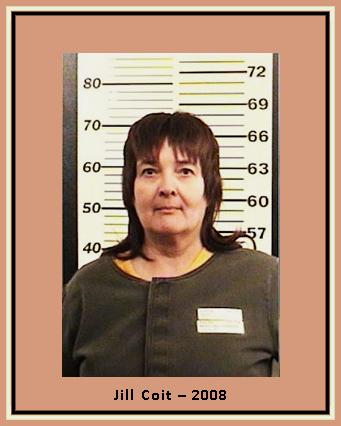 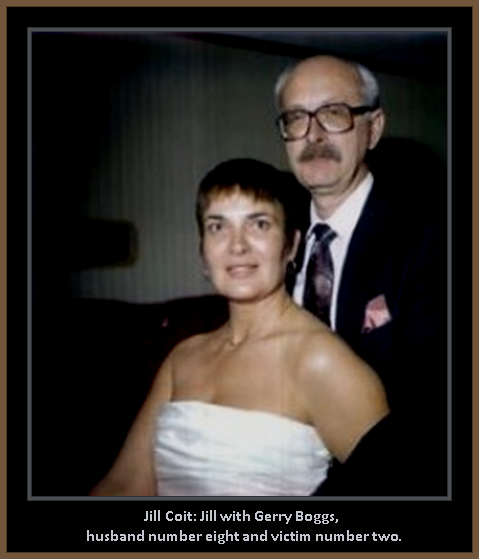 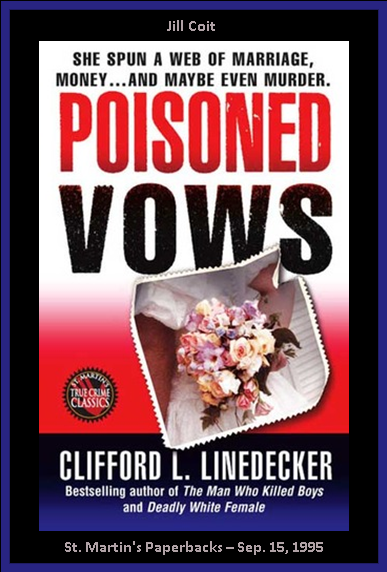 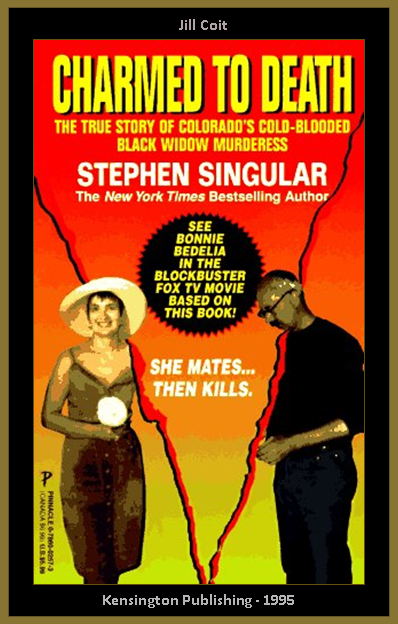