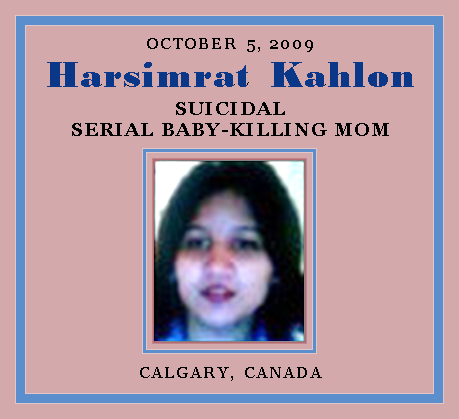 FULL TEXT: Calgary, Canada – On the surface everything appeared normal.

Harsimrat Kahlon and her common-law husband were a quiet couple who kept to themselves. He was a long-distance trucker who was often away from home. She worked as an assistant at a law firm in Calgary. Her friends called her Simmi.

She was a "fastidious housekeeper" who kept her Calgary basement suite as neat as a pin.
But Kahlon had a secret -- three secrets to be exact -- and after her body was found in the suite last fall [Oct. 4, 2009, police made a shocking discovery. The remains of three newborns, a boy and two girls, had been hidden away in a bedroom closet. The infants had been born at different times and two of the bodies could have been there for years.

It was still unclear how the newborns died, although investigators did say there were three separate pregnancies and evidence suggested infanticide.

No charges against anyone else are being laid.

"The bodies were contained in airtight containers, inside suitcases in a closet in one of the rooms in the house. This played a significant part in concealing the bodies and also any odour that may have resulted," said Insp. Guy Slater from the major crimes unit.

One of the girl babies, identified as Reet Kahlon, had been born at a Calgary hospital in December 2005, but it appears medical attention wasn't sought in the other two births.
Nobody ever knew that Kahlon was pregnant.

"Every indication is Simmi's common-law husband, co-workers and family were unaware of her pregnancies as she went to great lengths to conceal them," Slater said.

"From the get-go, she was a very private person, she and her husband. And the efforts she went through -- she concealed her actions and the births of the children and their bodies not just from him but from family and friends."

It was a painstaking investigation involving detectives and forensic psychologists, who pieced together what they think might have happened.

"Simmi's behaviour is consistent with depression and borderline personality disorder, which is defined as a pervasive pattern of instability of personal relationships, self-image and impulsivity that begins by early adulthood and is present in a variety of contexts," said Slater.

"Based on the physical and psychological evidence this case has many of the characteristics of infanticide."

Forensic psychologist Dr. J. Thomas Dalby was called in to do a "psychological autopsy" to gain insight into Kahlon's behaviour. His review included a diary that the young woman had been keeping.

"She didn't address the babies, and therefore there was no remorse, but it was clear that she was significantly depressed at times, looked at herself as worthless and had lost her will for life," Dalby said.

"The deceased had friends and acquaintances, but those attachments were rather ambiguous. Her attachment to her children seemed to be much stronger."
Dalby said the most disturbing part of the case was that Kahlon kept her dead children close to her despite having "many opportunities to leave the children or discard their bodies."

He couldn't say whether Kahlon, who died weeks after her last child was born, actually killed them, but he said "it certainly is the strongest hypothesis that would come out of this."

Dalby said several factors can lead to infanticide, including wanting to avoid the responsibility of becoming a mother or denial of the pregnancy.

"There's a phenomenon called denial of pregnancy where many women, even though they know they're pregnant, simply carry on as if they're not and not seek medical attention. Even when the birth comes, it's a surprise to them, because they have denied that it's there."

Slater said the case is closed but there will always be questions.

"We will never have all the answers in this case. Many of the answers are known only to Simmi."