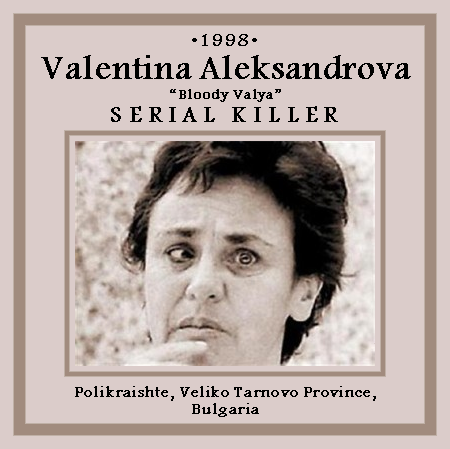 NOTE: The inclusion of this case is another exception to the “serial killer” definition. It involves three murders (and one attempt) which took place on only two separate occasions.

On July 18, 1998, in the Bulgarian town of Polikraishte with 3,000 residents, 76-year-old Velika Kukova was found beaten and strangled with her own headscarf in her home. Her husband Lyuben died later in hospital from the injuries sustained after having been horribly beaten. “Their skulls were literally crushed and smashed."

Two weeks later, on July 29th, in a nearby little village in Gorna Oryahovitsa a pair of old and isolated sisters - Sevdalina Angelova and Yordanka Bogoevska, were found beaten and robbed. Following a 34-day coma Sevdalina died and Yordanka, who lost an eye, survived.

Police investigators identified the perpetrator as Valentina Aleksandrova, an unemployed paramedic wife of a tractor driver with four children, two of whom were accomplices. Police said that Valentina made her sons hold the hands of her victims and then hit them with an adze until they lost consciousness.  Small sums of money were stolen from the victims’ homes - 80,000 Levs [US$5] from Kukova's home and 110,000 Levs [US$6] from Sevdalina's home.

Although confessions were made and the mother and two sons were the three murders were convicted, the family appealed. On July 6, 1999, Valentina (59) had been sentenced to life in prison,  Ivan (18) received a 10-year sentence, Vladimir (15), 5 years. The court also ordered the Aleksandrov family pay 41,000 levs in damages to the victims' family members.

In October 2009, the freed Vladimir was found dead by his brother Plamen. According to rumors, his death was punishment for his mother's sins.'

The Appellate Court later voided the verdict against Valentina of the murders of the Kukova couple and cancelled the monetary damages. She says her confessions were falsified. She continued to claim complete innocence for all charges of violent crimes made against her.

***
CHRONOLOGY
Jul. 18, 1998 – Velika Kukova (47), was found beaten and strangled with her own headscarf; Lyuben beaten (dies later).
Jul. 29, 1998 – Sevdalina Angelova, Yordanka Bogoevska, sisters found beaten and robbed. Sevdalina dies after a 34-day coma. Yordanka, whose eye was removed as a result from a strong blow, manages to survive. village in Gorna Oryahovitsa
Jul. 6, 1999 – the Veliko Tarnovo Regional Court sentences her to life imprisonment with a chance of parole. Ivan (18) received a 10-year sentence. Vladimir (15) is sentenced to 5 years, half of which he'd serve at a group home until he reached adulthood. The same court also had the Aleksandrov family pay 41 thousand levs to the victims' family members for property damages.
Year? – "The Appellate Court acquitted me of the murders of Velika Kukova and her husband Lyuben. They also removed the monetary compensation for their loved ones. My eldest son served in the Lovech prison until the decision of the Appellate Court, after which he was acquitted. Vladimir didn't stay in prison.
Oct. 2, 2009 – Vladimir, Valya's middle son, was found dead by his brother Plamen in Polikraishte. 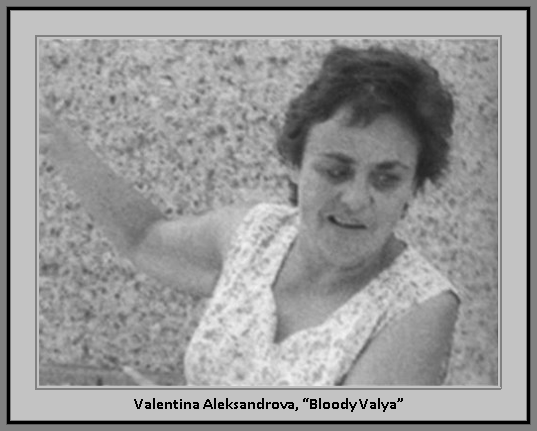