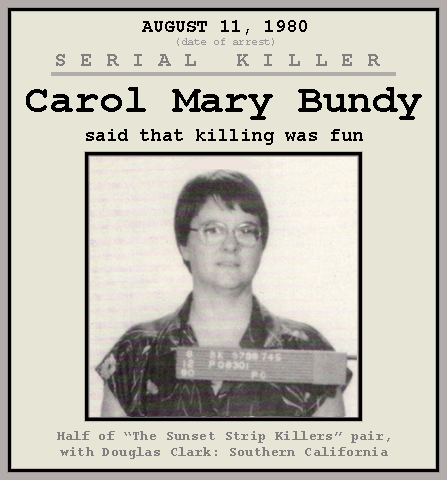 In 1980 Carol M. Bundy connected up with serial killer Doug Clark, participated in one murder as accomplice and committed another murder on her own. Two murders do not make a series, but there can be no doubt the Carol Bundy was a serial killer by type.

[Carol M. Bundy] told the police that she murdered Jack and cut of his head because he was ‘an asshole who deserved to die.’” [Carol Anne Davis, Women Who Kill: Profiles of Female Serial Killers, 2001, Allison & Busby Ltd., London, p. 174]

“Even now, Carol was intent on finding herself a new man, openly propositioning one of the police officers. She talked in detail about her sex life and said that killing was fun, when she was accompanied back to her apartment by police officers to gather further evidence she asked if they would have sex with her, explaining that it might be years before she had access to a man again. They declined.” [Carol Anne Davis, Women Who Kill: Profiles of Female Serial Killers, 2001, Allison & Busby Ltd., London, p. 174]

“Remember, I look innocent. Impression is worth as much as facts.” [(from letter to Doug), Carol Anne Davis, Women Who Kill: Profiles of Female Serial Killers, 2001, Allison & Busby Ltd., London, p. 175]

“Meanwhile Carol sent the judge a Christmas card and a note that said it was a pity they couldn’t meet for coffee some time. … After sentencing “Still intent on placating men, she sent him [the sentencing judge] a thank you cartoon that she’d drawn and added that she was a decent woman and that’s why she’d ultimately gone to the police.”[Carol Anne Davis, Women Who Kill: Profiles of Female Serial Killers, 2001, Allison & Busby Ltd., London, p. 176]

Wikipedia: Carol M. Bundy (August 26, 1942 – December 9, 2003) was an American serial killer. Bundy and Doug Clark became known as "The Sunset Strip Killers" after being convicted of a series of murders in Los Angeles during the late spring and early summer of 1980. The victims were young prostitutes or runaways.

Bundy had a troubled childhood. Her mother died when she was young and her father abused her. Then, when her father remarried, he put her in various foster homes. When Bundy was 17 years old, she married a 56-year-old man. By the time she met Clark at the age of 37, she had just escaped a third marriage to an abusive man, by whom she had two young sons. She had begun an affair with her apartment block manager, part-time country singer John Murray. She had even attempted to bribe Murray's wife into leaving him, but she wasn't pleased and told Murray to evict Bundy from the block. This did not end the infatuation and she continued to show up regularly to venues where Murray was singing. One of these was a bar called Little Nashville. It was at this bar that she first met Clark in 1980. Clark soon moved in with Bundy and they found out that they had similar dark sexual fantasies.

Clark started bringing prostitutes back to their apartment to have sex with both of them. Then, Clark began to take an interest in an 11-year-old girl who was a neighbor. Bundy helped lure the girl into sexual games and posing for sexual photographs. The pedophilia wasn't enough for them, however, and Clark started to talk about how much he would like to kill a girl during sex and persuaded Carol to go out and buy two automatic pistols for him to use. Reportedly, Clark was striving to fulfill his fantasy of killing a woman during sex and feeling her vaginal contractions during the death spasms.

The killing began during June 1980. Clark came home one night and told Bundy about two teenagers, Gina Narano and Cynthia Chandler, he had picked up on the Sunset Strip that day and subsequently murdered. He had ordered them to perform fellatio on him and then shot them both in the head before taking them to a garage and raping their dead bodies. He had then dumped their bodies near the Ventura Freeway where they were found the next day. Bundy was uneasy upon hearing this news and phoned the police, admitting to having some knowledge of the murders, but she refused to provide any clues as to Clark's identity. Clark told Bundy that, if either of them were apprehended, he would take the blame in the hope that Bundy would be allowed to go free.

Twelve days after the initial murders, Clark killed again, and this time Bundy didn't call the police. The victims were two prostitutes, Karen Jones and Exxie Wilson. Like before, Clark lured them into the car, shot them, and dumped their bodies in plain sight. The difference this time was that he took a trophy: Exxie Wilson's head. He took the head back home and stored it in the fridge. Bundy, upon seeing it, put make-up on it before Clark used it again for another "bout of necrophilia." Two days later, the duo put the freshly cleaned head in a box and dumped it in an alleyway. Three days later, another body was found in the woods in the San Fernando Valley. The victim was a runaway named Marnette Comer, who appeared to have been killed three weeks earlier, making her Clark's first known victim.

Clark waited a month before striking again. Meanwhile, Bundy was still infatuated with John Murray. She would go see him sing and after a few drinks, her conversation would turn to things she and Clark were doing. Murray was alarmed and implied that he might tell the police. In order to avoid this from happening, in August 1980, Bundy lured Murray into his van after a show to have sex. Once they were inside, she shot him and decapitated him. She left various clues behind, however, such as the fact that the two of them were seen together in the bar, and she had left shell casings in the van. Bundy couldn't take the pressure and two days later she confessed to her co-workers that she had killed Murray. They called the police and she began to give them a full and to-the-point confession about her and Clark's crimes.

Clark was immediately arrested and the guns were found hidden at his work. Bundy was charged with two murders: Murray and the unknown victim whose killing she confessed to having been present at. Clark was charged with six murders. At his trial, he acted as his own defense and tried to blame Bundy for everything, portraying himself as an innocent dupe. The jury did not believe him and he was sentenced to the death in 1983. He remains on California's death row. Bundy, on the other hand, made a plea bargain and in return for her testimony only received a life sentence. Bundy died on December 9, 2003 in prison at the age of 61 from heart failure. 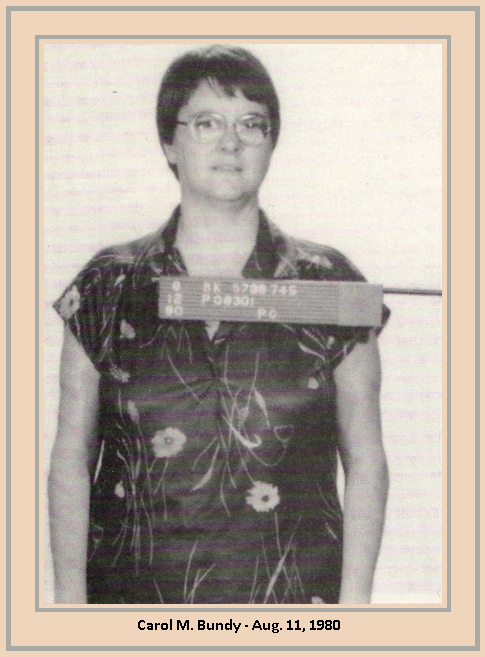 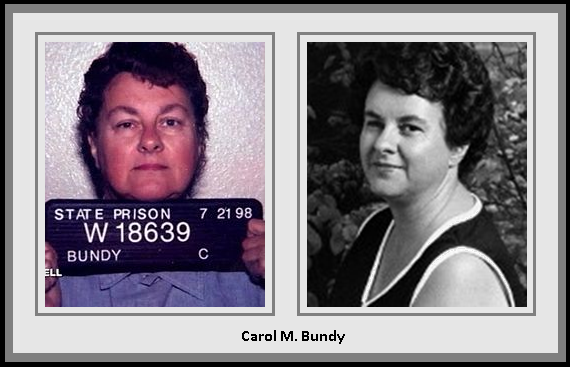