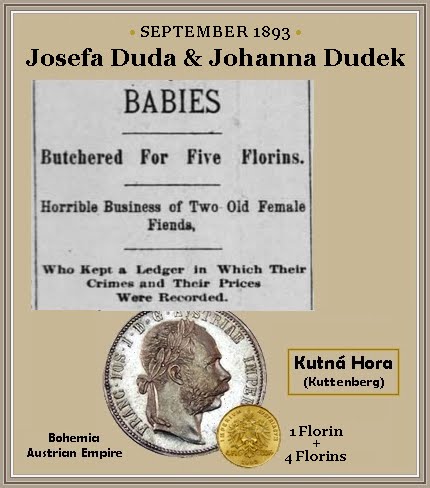 Note: Kuttenberg is the German name for Kutná Hora, Bohemia, which, at the time of these events was part of the Austrian Empire. Some English language sources offer misspellings of  “Kuttlebelerg” or  “Ruttenburg.”

FULL TEXT: Vienna, September 14. – A sensation has been caused in this city by the arrest of two women, living in separate villages in the district of Kuttenberg, Bohemia, which recalls the terrible tragedies enacted last year in a similarly horrible style. The two women it seems were engaged in systematically in the business of murdering children whose parents desired to have them out of the way either because of deformities or because the parents were too poor or too heartless to take care of their children, or because the children were illegitimate and a source of reproach for their parents. These heartless women, it is added, not only did a thriving trade in murdering helpless babes, but also contracted to dispose of their bodies most effectually, and guaranteed secrecy and an effectual disappearance for stated sums of money.

The price usually charged for the murder of a child was 5 florins. The two women seemed to have done a large trade, and are reported to have saved up considerable sums of money as the fruit of their inhuman work.

The discovery of this wholesale system of baby murdering was brought about by accident, or the women might have continued their prosperous business for for years to come. So safe did they feel themselves from detection that one of them kept regular ledgers, in which was inscribed the sums received, the person the money was received from, the age and description of the child, and the date it was disposed of. But the help of this horrible record of crimes the authorities anticipate not only convicting and effectually disposing of these two female friends, but they also anticipate being able to make a large number of arrests and bring numbers of others to the bar of justice.

[“Babies Butchered For Five Florins. – Horrible Business of Two Old Female Fiends. – Who Kept a Ledger in Which Their Crimes and Their Prices Were Recorded.” The Cincinnati Enquirer (Oh.), Sep. 15, 1893, p. 1] 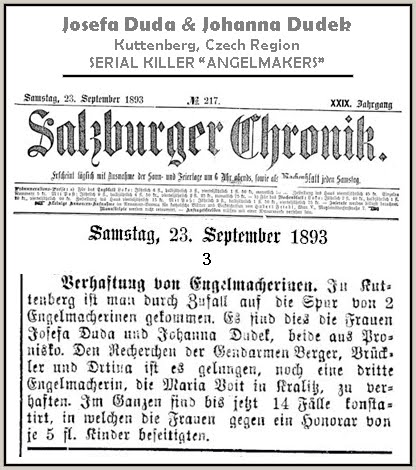