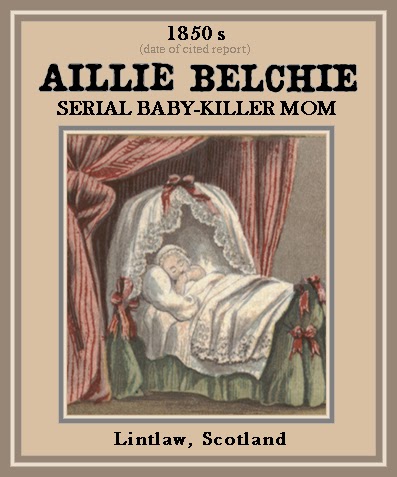 Allie Belchie’s name was immortalized in a local proverb. Following is an entry of the “saying” she inspired and which became part of the local culture.

Said of those who are flagrant offenders. Allie, or Alice Belchie; was a hind or cotter’s daughter at Lintlaw, in the parish of Bunckle. It is reported, and credibly believed, that she murdered three of her illegitimate children, at different times, by drowning them in the Leigate pond, at the head of the Crook field, on the south side of the kail-yards. She died in travail of her fourth child; and while some of the people of the place were sitting up with her corpse — holding her late wake — and drinking her dirgy — one of the decent neighbours, and most sponsible man in the company, was called upon to make an exercise on the occasion. As the honest man prayed, he said, “The Lord hae mercy upon us a’ — especially upon that damned bitch, Allie Belchie, lying in the bed there, who has sinned to the nineteenth degree of fornication.”